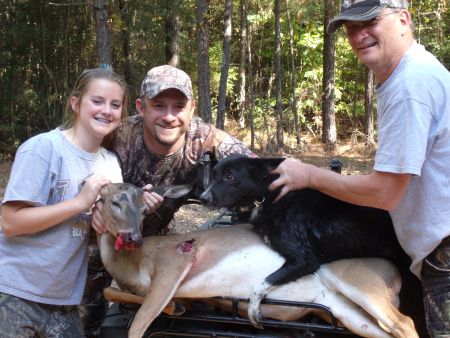 This post is in response to a report by switzersfab from last week. He had killed a nice 8pt with his bow and mentioned bucks chasing does already. I thought 'what a rookie', man was I wrong. So I apologize to him for that.

That's what I get for thinking I know it all.

I hunt in southwest Mississippi, on Saturday morning, I went into about a 40acre section of our woods that no one has been in since January, no foot traffic, no hanging stands, no feed, no cameras, no 4wheelers, NO NOTHING.

I heard deer snorting like they had winded me, except they were up wind of me. They were getting closer and finally a large doe and 2 fawns were under me, snorting WHILE eating acorns. I thought that was weird. They fed near me for about 15 minutes, then wandered off. All of a sudden they started crashing back towards me with 2 small bucks in tow.

She even stopped, squatted, and peed two times in front of them, while they were chasing them.

Now I know they were young, but it was just so intense??? I have also noticed plenty of bucks pushing each other around in food plots on my cameras.

Anything to these happenings, or just normal???

What do you think???

razzledazzle
were at in mississippi
were in southwest mississippi you hunting, i hunt in walthall county but never heard of deer acting like that this early.
Reply

passthru69
Liberty
I hunt in Amite Co., just outside of Liberty. South of hwy 48.
Reply

chris19
Weird
I hunt in gloster and never saw anything like that!!!
Reply