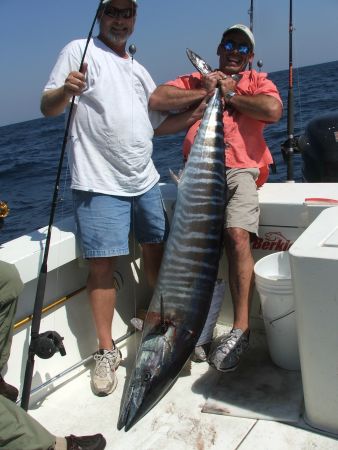 Finally with the snapper season open we get some great weather for fishing. On Friday it was Alpine Power and these guys came to fish. First off I stopped and looked for snapper in what used to be the closed area all summer and found nothing. Next stop I watched the Lowrance electronics and nothing, next stop same until I ventured out a little and found the schools. The reason I wasn't marking any fish was because the larger ones were hanging out about 200 yards away from the rigs. How many of you ever look that far away for fish? When you know that there should be some at a certain rig don't forget to look around and look way off the rig if the water is clean. The fish were in such big schools and hanging way off the rig and they averaged 9 to 11 pounds. I just never looks right fishing that far away from a rig. We put most of our limit in the box very fast an took off for the deep water and the amberjacks. I think the fish were waiting for us there because it was fish on from the first line down to the last. The last one was a whopper to. I call lines in and one of the guys started to reel in and something hits and makes a long run. After a while I start thinking big AJ because of the long fight but when this fish popped up and I saw the stripes I ran for the gaff and put a whopping 85 pound hoo on the deck. Good thing for Mustad hooks because mono doesn't hold up to wahoo very often. The Mustad lodged perfectly in the corner of the mouth and held tight. All of the guys were very happy with the catch.

On Saturday it was John Dean and gang and some of them were rookies. We had both boats out with this group and when I pulled up to the snapper spot my other Captain asked what we doing way out here. I told him don't worry just drop a line. He didn't have a fish finder because I broke the transducer off cleaning the day before. Again it was fish on from first drop to last. We put most of the limit in the box and took off to the deep water for more action. Today on this spot it was extra large amberjacks on the menu. The first lines hit the bottom in 250 feet of water and it was near 50 pound AJ's all around. Capt Tim claimed the largest for his group at 70 pounds. The guy thought he was stuck on the bottom. No wahoo this day but the limit of AJ's and snapper made a great catch. Capt Tim found the larger Almaco's that I had looked for both days and put about 5 or 6 in the box. He finally beat me on total pounds of fish. I did find one cobia on Saturday but they have been hiding from me lately. If you want a trip before the snapper season closes send me an e-mail. Capt Tommy Pellegrin. 985-851-3304
Reply

fishnmoney
Man that is a BIG Wahoo!
Congrats Captain and Crew!
Reply

Capt. Tommy Pellegrin
Gray, I need a deck hand for Friday and Saturday. I will be going there. Want to know all the secrets come on down.
Reply

Capt. Gray Long
That's pretty funny. I'm fishing down there with you/besides you on Sat. Just cancelled my overnighter for Thurs/Friday.
Reply 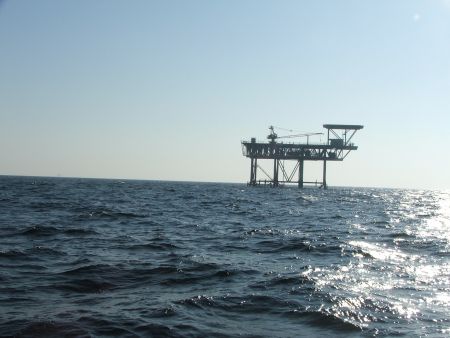 Gray, I hope you can keep up because I'm planning on loosing you somewhere out there before I go to the secret spot.
Reply