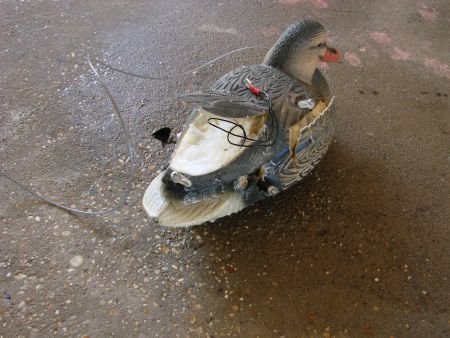 I finished up my duck decoy today. It seems like every year I take on the project of a new motion decoy. After lots of failures I think I have a winner.

I cannibalized two decoys that had props. I took the two props out of those dekes and put the propellers inside the cavity of a Hen Mallard. The props exited just about where a ducks legs sit. I hooked the positive and the negative wires of both motors together. I then tied the ends to the battery terminal.

For a battery I used an old 6V Mojo battery. These batteries last about 8 hours running. Placing the battery was the most challenging part as when I put this heavy battery in the hollow of the hen decoy and put the decoy in the water the decoy would not sit right. It was hard making the decoy sit straight with a big old battery in it. I rigged up double sided tape and mounted the battery in the correct position so that when inserted the decoy sat straight.

With battery and motors installed I used spray in that quick drying foam and filled the interior of decoy with it. By doing this I waterproofed the working parts of the decoy. I let it dry and then came back and cut out the foam to be able to get to my battery terminals. I wanted to do this so I can charge the battery.

Edit:
I finished the demonstration today. What you didn't see is when I threw it in the water and it floated right side up. It seems to be quiet and makes lots of motion.

red-dog
It's sits low enough in the water like that to make good motion?
Reply

Duck enticer
I put the duck decoy in the water with the battery in it. I marked the level and installed the props so that they were about half way in the water. It makes maximum froth like that. Lots of water movement!
Reply

red-dog
Nice. I tried putting one of those quiver hearts inside a decoy once but the batteries never lasted very long. Good luck with that.
Reply

Cajunsim
I think I know a place you can test it out!!! See you in a few weeks. Will be sitting in a tree stand in AM overlooking a certain pond. Later.
Reply