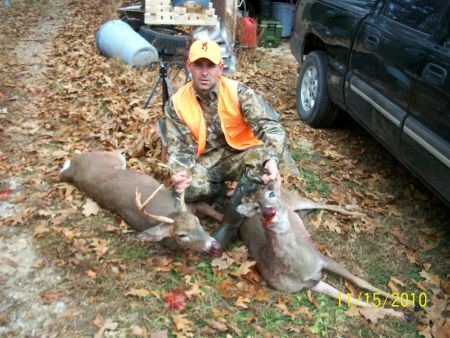 Well Last friday me and my buddy known as Bug headed north for the annual trip to Missouri. We arrived at ny aunt's house at about 3am saturday morning. We took a nap and hit the woods at daylight we mostly slipped around the property to scout for our spots. I didnt find much sign on the side of the property I scouted but bug saw 7 and found tons of sign on the side he scouted. we headed out of the woods at about 930 and talked about what we found, and had a lunch. After talking we decided to make a mid day hunt. We got up the tree for about 11am I shot a button buck at 1110 and bug shot a 3 point at 1140. After pulling a bodybuilder and dragging the deer out up the mountain by hand instead of getting the 4 wheeler we cleaned them up and headed back in the woods.
On Saturday evening I didn't see anything but Bug shot 2 does and again we drug them out by hand b/c we didn't want to disturb the area.
The next morning I had a 5 min staring contest with a doe. I finally won the battle and killed her. I also killed another doe that evening. Bug saw several deer on day 2 but let them walk.
On Monday morning we were suppose to be trophy hunting, but my uncle told us to kill one for his freezer. So bug killed a doe and 30 seconds later the buck that was trailing her came out and he shot him a 7 point.
We ended the trip after the monday morning hunt b/c we were all tagged out. the final count was a 7 point a 3 point a button buck and 5 does. Bug got the best of me killing 5 to my 3. We had a great trip and could not have imagined
seeing/killing so many deer in such a short period of time.
Hopefully next year Undertaker or Randy will get to come with us You guys sure missed out on a great hunt this year.
Reply

Swine-Stalker
Congrats
Congrats on the kill man... Yall gonna make a trip to TR opening weekend? Im going to try to catch Sunday and Monday of this weekend and next.
Reply

MOQWACK
Where at in Mo
Congrats, what part of Gods country were you hunting?
Reply

LIVE BAIT
Yes In Deed
Oh Yea Swine Stalker I Wouldn't Miss Opening Weekend Unless Something Was Really Wronge. I Am Having Severe Withdrawal Symptoms From Not Making It To Three Rivers Yet This Year. We Were In Howell County In South Central MO
Reply