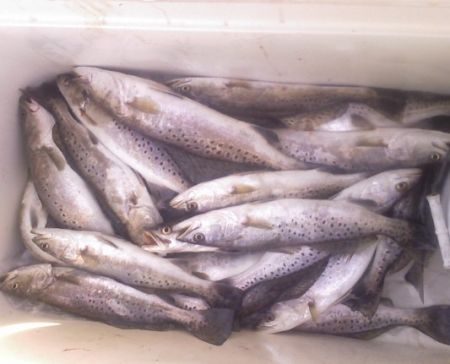 Today I left out of Hopedale solo to fish Lake Ameda. Reports had it, slow trout fishing this time of year due to cold water temperatures. I already knew this, having fished all seasons in Louisiana waters for over 40 years. The water temperature was 52 degrees under partly cloudy skies and cool weather. This was a warmer temperature than previous trips where it was 42 degrees. I checked out a few of my favorite spots, one of which yielded 2 under sized black drum and one undersized redfish. I went into the lake and checked out another spot, but nothing was obliging until I headed to the middle section of the lake. Lake Ameda is an oyster-bottomed lake and, like any other oyster bottom lake, warms quickly as the oyster shells hold the sun’s heat, warming the water quicker than mud or sand bottom counterparts. At first things were looking bleak, I was not catching any trout, but there were 2 other boats and they weren’t catching anything as well. So I changed up the fishing strategy to accommodate cold water fishing: 6/20 braided on the reel with 4 ft of 10 pound Vanish line tied to it and a ¼ oz. jig head on the business end with a Saltwater Assassin Opening Night and an egg clip-on cork 3 ft above. I dipped the lure before every cast in Berkley Gulp solution. After casting it out with a slow retrieve, I realized this was the ticket to success. Trout were obliging and in quick order. Don’t get me wrong, I had my days where I watched others catch fish while I watched and couldn’t figure out why I wasn’t. But, today, was my day—my turn! I didn’t see any of the other boat land one fish during the time I was bringing aboard speckled trout in good order with few under sized throw-backs. I limited out—25 keepers—and headed back to the launch by 9:30 am. As I drove back, passing up several other boats along the way, I still witnessed not a fished landed by any of them. It was my day!

Pictures show my box of speckled trout, the low tide at the launch ramp, traffic heading back into New Orleans I-10 west bound, and me driving solo.
Reply