ProV1
So at the beginning of the year I decided I would look into the expandable broadheads. The decision was not made because I have had problemes with my Muzzy's, but more out of curiosity. I watched videos, read testemonies, and spoke to people who swear by them. I went out and bought a bit heavier arrow to ensure good penatration, which was my biggest concern. Pile Driver 350. Yesterday evening I had my first opportunity to test out the new setup. A doe about 15yds slightly quartering to me. Maybe not the ideal shot but certainly one I have taken with success with my Muzzy many times. She ran off with the majority of the arrow sticking out of the entry side. After giving her time to expire I found blood but immediatly tell the blood seemed to be slimmy as would be blood if the arrow passed between the shoulder blade and ribs. Needless to say the blood dried up and I never found the deer. I didnt post this to bash the Rage, but to post my experience so that others will be aware of what can happen.
Sorry Muzzy, I will not stray again!!
Reply

bco155inf
never tried the muzzy but always hear good news about them i started with hypershot expandables then the rage 2 blade came out and i have to yet lose a deer with the rage also heard alot of good feedback and seen some on the g5 t3 expandables.
Reply

ROB213
Bought into the hype, and got a pack of the 3 blade. Lost a 8 point last year, a doe this year. Back to fixed blade.
Reply 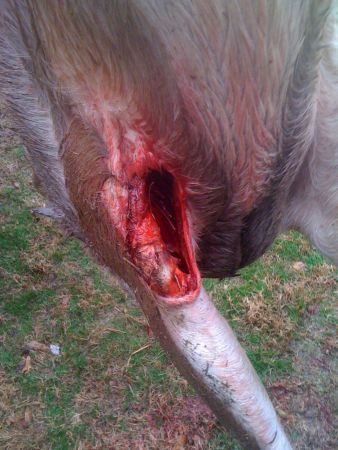 i have yet to lose one with the 2 blade . idk i used three blades on 2 does and they not went more than 60 yards and dropped i glad i had good luck with them. what kinda exit holes do yal get with the muzzy and do they fly any diff from the rage?
Reply

ProV1
thanks for the post. I like seeing the pics of the exit holes... thats what steered me towards the rage in the first place. With that being said, and this is my experience, the Muzzy 100gr is just more of a sure thing. Nothing fancy just flys straight and if you hit the front shoulder, neck or spine, your going staight through it. I do not have exit hole photos, i guess I should start taking some, but the most impressive feature is just what there selling point says BONE CRUSHING... I have passed a few through both front shoulders. Hope this post gives you a little bit insight. Good Luck!
P
Reply

2' rage cuts a 2' straight line. Neglecting the ferrule, that would be 2' of total cutting surface on a rage 2 blade head...

I'm leaning toward the one with more blade and no chance of bouncing off.
Reply 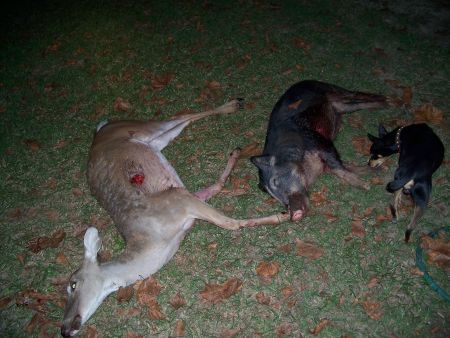 I have personally never used a rage or any other expandable because I have never had a Thunderhead or Muzzy underperform. They always cut a hole, my blades are ALWAYS open. If you put it where its gotta go a feild point will do the trick. If you can't shoot very well and like to gut/liver shoot deer like everybody does on tv then the Rage is for you. I work at a deer processing shop and can't tell you how many gun-killed deer that had Rage's stuck in the shoulder with just an inch or so of arrow on it. My motto is don't fix it if it ain't broke. Never had a blade break on a Thunderhead or a Muzzy and never had one not go through a shoulder either. Also you can get 6 Thunderheads with extra blades for the price of 3 Rages with no extra blades...These pics are from a Thunderhead...
Reply

mud man_500
I tell you what dude. I wouldn't give up on them yet. I fine they fly just like a field tip and for not being as shape as i would like them to be, they sure put out a mean cut. I loss two or three does with my rage three blades, so i switched to slick trick's (which i HIGHLY recommend, HIGHLY, fly like field tip, just try them). But with those rages, i think i just may have made a bad shot. One doe was quarter and away and same issue as you lost her, second doe i don't where i hit her. After going to slick tricks, i still kept three rages in the quiver and chose to use one on a hog. He squaled like crazy when i hit him and ran about 15 yards, The blood trail was unreal,Like a garden hose. that was cool. Moral of this story, Wait for a good shot position and try one again, you should be dissappointed.
Reply

empty shell
I am a firm believer in muzzy myself. Never have tried anything else. Yall got deer runing 60yds with rages, i have never had one go over 30, hogs either. As for dont shoot like field tips, i ssy mine fly pretty good. I've taken several while on the stand out to about 25 yds. Seems like good group to me.
Reply 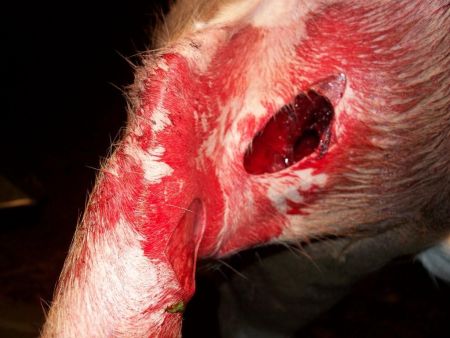 I have shot Muzzy 3 blade 100 gr. since the early 90s. The G5 and the Rage are the only two broadheads that have made me consider switching but the a'int broke don't fix it kicks in everytime. Plus, the cost keeps me a Muzzy customer.

Aside from that their performance is consistent and penetration maximized. Every open on impact broadhead sacrifices energy to open the blades. Period. To me, that is unacceptable and unnecessary. I know with Muzzys that I can shoot a deer of almost any size from front to back or back to front and get an exit hole.

If your bow is tuned, Muzzys will hit the same as field points. If they don't, you have an alignment problem.

I have killed a pile of deer and the average track job is 50 yards. I have watched a bunch hop 35-40 yds., stop and pile up. Done. Some have been paint bucket but when they die in sight or at least within hearing distance you don't need paint bucket blood trails. An adequate bloodtrail is there and the only deer I lost were from poor non-lethal shots.

$35 for 6 broadheads. $12-15 for 6 sets of replacement blades. I once had one ferrule and tip that I killed 9 deer with - just changed the blades each time. One of the cheapest broadhead choices out there.

For me, once you consider all of this I can't switch. All that said thought, THE MOST IMPORTANT PART: Shot Placement.
Reply

slickhead-slayuh
Amen...and that's all I got to say about that...
Reply

empty shell
I dont buy new blades, invest in a $5 broadhead sharpener. I shoot my broodheads when practicing alot and sharpen them after.
Reply

DucoteQuatre
I will say the advantage to increasing cutting diameter is that you can get away with a little poor accuracy. I know guys who shoot 2' to 2 1/2' expandables that have literally gutted deer with shots too far back. I can't do that with a Muzzy. At the same time, that is a small consolation for a bad shot, especially, with the loss of penetration on normal shots. These same guys have problems getting pass throughs on anything othe than straight broadside through just rib shots. While increased cutting diameter is an advantage on poor shots, I don't want my brain to even begin to rely on that option or sacrifice the penetration. I'll just keep offering the same prayer before just about each shot, 'Lord, guide my broadhead through the vitals and put the deer down quickly. According to your will and for your glory.' Thwack!
Reply

DucoteQuatre
Empty - I appreciate getting the most out of anything. And I have shot a few deer with sharpened blades and even some that weren't sharp (my mistake). And it seemed that wach of them lived longer and ran farther than they typically do with fresh, out-of-the-packet blades. Plus, taking the time to do that just right isn't worth it to me and I'll spend the $2-3 bucks on blades per shot. Beyond that, it gives a little more confidence knowing those blades are factory sharp and that means a lot in bowhunting.

Have you noticed any differences between sharpened and new blades? Tracking distance? Bloodtrail? etc.
Reply

morrisvswild
Shooting a fixed blade broadhead is night and day difference from shooting a machanical broadhead. Both have advantages, and disadvantages. The fixed blade my have done well with that shot, although it was a low percentage shot. The Rage is a great head, but its machanical and you need to understand how it works. There is no doubt that one of the blades caught the shoulder boned at which time you lost all of your entergy. A fixed head does better, through bone, but as a bow hunter I don't want to hit any bone, unless its a rib. Shot placement is key when bow hunting, know your equipment and your skill level, after that let it fly.
Reply

in bowhuntitng you have to know your limitations. some have to find them the hard way. inside of 20 a shoulder hit with a proven fixed blade, such as a muzzy, is perfectly fine. i have done over and over again. the problem is sifting through all the hype and bs surrounding mechanical broadheads and hunting arrows. a gigantic cutting diameter plus light shaft = disaster if anything but a rib is hit. with anything mechanical something can and will go wrong. to mitigate a lost animal: shoot a proven fixed head, don't take shots you have not practiced, tune your bow, shoot all year long, and shoot a finished arrow in the 400 grain range.
Reply

Redbuck
I get such a kick out of people saying what works better and what doesn't. I know people who lost deer with muzzy's, with rage, with thunderheads, rocket heads, grim reapers and they all average out to the same. Deer are tough animals, things happen that we can't see on some shots that seem perfect and we lose them. They all work, you practice and put that arrow where it's suppose to be and the rest is luck.
Reply

ROB213
I tell guy's all the time, Hunting Clubs are like Women, find what works best for YOU. The same holds true for, Broadheads, Bow's, Gun's Ect. Good Luck and Good Hunting this year.
P.S. Does anyone know how to do a Rain Dance.
Reply