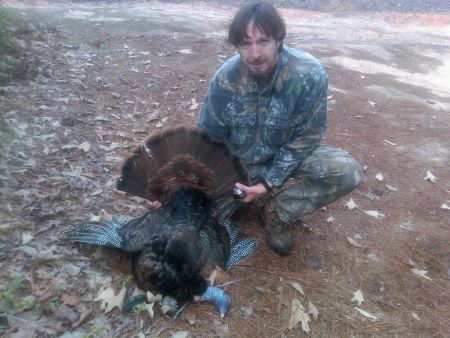 The turkeys were gobbling up a storm this weekend. My guest had non stop gobbling action till about 12:30 PM Saturday morning. We chased several different birds all over the property walking for miles in a featherless effort to bag a Tom. We did learn a ton about the gobbler's travel patterns in this area of the property which paid big dividents Sunday AM. We were preparing to roost the area Saturday PM and spied a full strut gobbler and a hen in an open field. The Tom was not gobbling, but he rarely came out of strut. We have a road that comes out into the field about 50 yards from the bird and it would be an easy ambush. I asked my guest if he wanted to take the bird and he quickly replied that he did not want to kill him that way. I was very impressed and replied that it would be turkey killing and not turkey hunting. We seperated to double our listening range and heard a couple of gobblers sound off and some close fly ups. With the location of some gobblers identified and partnered with the pattern from the morning, we formulated a solid plan for Sunday AM. We hit the ground early and were in position well before gobbling time. A moderate fog blanketed the fields, but the woods were clear. The magic time came around and the birds started singing from the treetops. We were positioned perfectly in between 2 or more gobblers. Unlike the day before, one bird went away and left the other one strutting back and forth on a hill top. At 8 AM, we could not take his incesant gobbling and he was not coming to us, so we worked our way close. We had to belly crawl the last 20 yards to get across a dim road and get to a hide tree. The tree had no cover around and was way less that ideal. I laid on the ground behind and started a quiet yelp string with a diaphram call. My notes were quickly drounded out with a booming gobble about 75 yards away. Well the silent treatment was too much for him to bear and after about 15 minutes the strutter appeared on the road at 52 yards. My guest was slightly out of position with his gun pointed parallel with the road. The staredown was on with us pinned down and moving to shoot out of question. My guest handled it perfectly and as the bird turned to walk back into the woods stepped behind a small tree and he repositioned for the shot. The shot sealed the deal on a long beard. The bird had a 9' board and 1 inch spurs. It was a great end to non stop action weekend. We will be at it again toward the end of the week and weekend. Good luck out there!