CAN YOU IDENTIFY THIS GUN??? 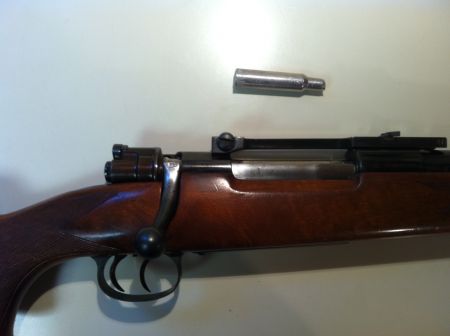 This is an heirloom gun. I have brought it to many gun shops and gunsmiths. No one can positively identify it. My father in law had a casting made of the chamber and the closest match is a .308 Norma round. Only exterior marking is '300 SH MAG'. Internal markings say belgium. I am only somewhat familiar wit firearms and looking for your input...please help.

The photo was not the best for showing the action of the rifle, but it looks as if it has a (Fabrique Nationale de Herstal (FN) action. The FN was based on the German 98 Mauser rifle and was made in Belgium for a variety of other gun companies. The external ejector and the Claw extractor on the outside of the actual bolt and the safety a roll over type at the rear of the bolt is in line what a FN rifle would have. If it is, the name should be under the scope mount which is mounted over the bolt and on the head of the action. The rifle, however may simply be a sportized version of the military Mauser 98 or a version which was made in Belgium after WW II.

300 SH MAG cartridge was a form of the 7x61mm Sharpe & Hart Magnum belted cartridge (7mm S&H Super) was developed by Philip B. Sharpe and Richard(Dick)Hart in the 1950s and based on the .300 H&H (Holland & Holland) Magnum case. The 300 H&H case was a belted case as is the Swedish Norma case you are comparing the casting your father made of the chamber. It is hard to tell from the photo if the casting has a belt or if the casting simply ended at the belt in the chamber.

Sharpe was able to get the Schultz & Larsen gun company of Denmark to chambered the cartridge in the 7mm x 61mm S&H caliber in their bolt action rifles and Norma started to manufacture commercial ammunition according to the designers specifications for that caliber. The deal was made in the mid fifties. However the Schultz & Larsen rifles had rear lugs on their bolts and did not look like the photo you posted.

Today the cartridge can only be made by hand loading the round. However they have a variety of bullets to choose from, and Hornady lists load data for the cartridge. It was hot stuff in its day.

As stated they first started with the 7mm version but was eclipsed by the new 7mm Remington Magnum which was coming into existence at that time. Other calibers were tried among those were the .308 diameter (300) SH Mag. Opening up the case again to 30 caliber (.308) would make it almost identical to the 300 H & H case from which the 7x 61 round was made.

I don’t have any specific reloading data for the round but I am sure l you could find some somewhere. Cases could probably be made by fire forming 300 H&H cases, but I am not really sure. 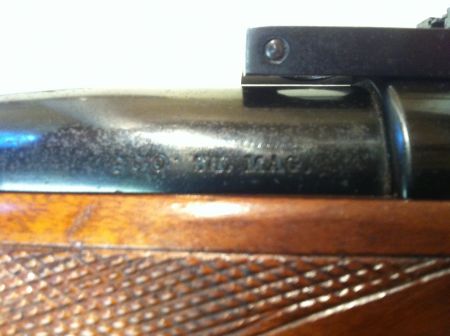