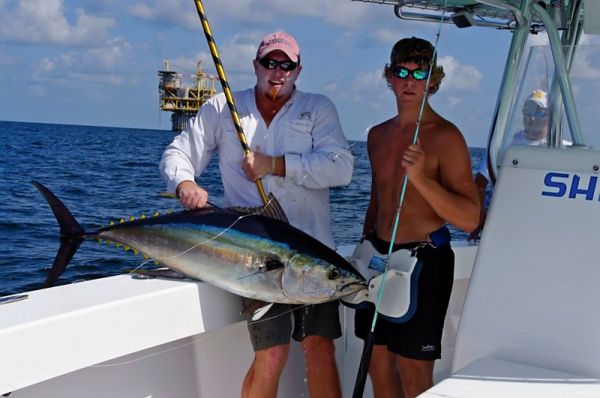 Barrie Arthur wanted to treat his Grandson, Austin Summers, to an offshore graduation trip with a couple of friends. I set them up with Capt. Kevin Beach on the 33-ft Freeman cat for a trip they wil long remember. Now Barrie is no stranger to offshore fishing having fished aboard their sportfisher 'The Grandson' for years, but he told me after the trip it was the BEST offshore trip he had possibly ever been on. They were finished before 1:00 p.m. with no more space in the huge cooler and headed back to Mississippi.

Here are a few comments from Barrie:

'This was a fishing trip for Austin as a high school graduation gift and he invited two of his fellow graduating football team mates to join him.

We met Kevin on the “Pale Horse” at 6:00a.m. and promptly departed through the Southwest pass of the river to a shallow rig to catch bait…..from there South to the first floater and put the lines out. While the water color was less than ideal the action picked up quickly and two fat yellowfin tuna were boated.

Not satisfied with the water color, Kevin moved further South where there was an active green/blue color change line, tuna busting the surface, six frigate birds working and non-stop action.....just the way it’s supposed to be !!!Austin just knew there were marlin down there, but was happy to get his two buddies their first yellow fins....they didn’t know they had to be indoctrinated, by eating the tuna’s heart....or at least taking a bite.

At the end of the day Austin’s two football buddies realized that there was a sport more physically demanding than football....that is -- a stand-up tug of war with a yellow fin tuna!!
The only thing better than catching the tuna, was getting home, firing up the grill and sharing the feast with others. Tell Kevin hello and we WILL be back....Barrie.'

There are still some great dates available this fall to get in on some world-class offshore action out of Venice, LA.

For you chance a a BIG ONE, call SUSAN at 504-329-7335 to book your date. You may take up to six people aboard the offshore vessels, so grab a few friends or family and give me a call.