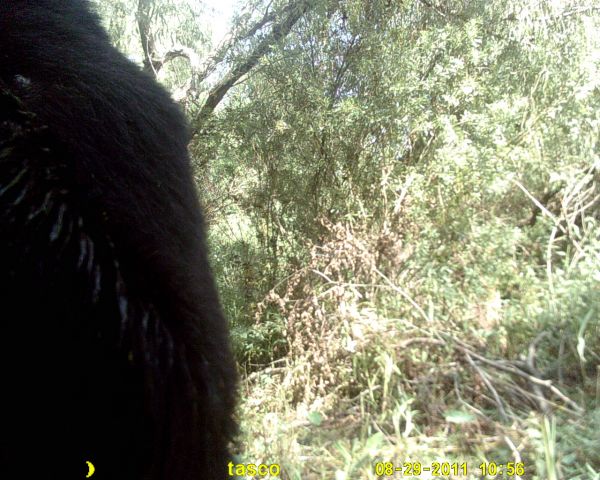 Hey guys, I checked my game camera this morning and this is what I found. I set it on 8/29/11 at 9:45. The first image occurred one hour and 11 minutes later. Whatever it was, then punctured the motion sensor and caused an overexposed picture in which you can see fur of some sort. Eight minutes later the camera took another similar picture and then the final photo that shows the dark shape. I have looked at the pics over and over and tried to bring out as much as I could on the over exposed shots, but to no avail. An odd thing to me, is that after the puncture, 2 shots occurred that were overexposed yet the very next picture came out very clear. How can that be? The camera was set four feet off the ground, strapped to a good sized tree at the Atchalafaya Delta WMA. At first I thought it was a big hog, but the ones I have taken at the Delta seem to have a much coarser type of fur. So that leads me to think it is a bear. Several years ago, a bear was sighted by multiple hunters on the Delta, but that was a very rare occurrence. So what do you guys think it is? Have you had a similar game cam experience? This is a first for me and I am very interested to hear your opinions. I will be going back with another camera to see if I can get a better photo.
Reply

Cajunsim
Almost looks like the muzzle ring of bear with ears back looking into cam in second photo and the looks of the fur my guess would lean toward bear. JMO
Reply

CGKimble
If you blow the middle picture up 400% you can make out the muzzle of a bear. Nose is clear as day
Reply

Ray
I agree, it's a black bear. We have caught a a pair a couple of times in the Park south of Abbeville.
Reply

Huckleberry
Guys, that's my Uncle BooBoo. He's a hairy son of a gun. Hates game cameras with a passion and roves the basin with an ice pick puncturing every one he finds.
Reply

davidj
Ricky, What model Tasco is that camera. I am looking at purchasing a couple and was looking for a little info. I was looking at model 119223c. If that is your model how are the pics befroe it got destroyed and what kind of battery life do you get?

Def. looks like a bear face in the second pic. 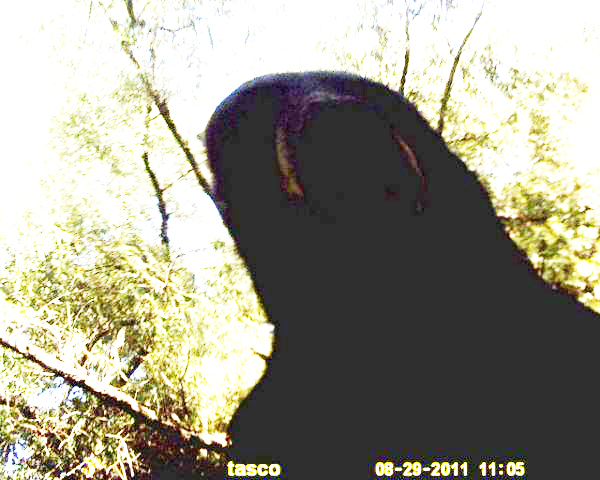 I over exposed the pic a little and it looks like a bear snout like noted above. Hope you don't mind me editing the pic, I can take down if need be.
Reply

Ricky Aucoin, Louisiana Sportsman field reporter
Yeah Plum, that pic definitely shows a bear face looking down at the camera. My version was very dark and hard to tell quite what it was.
Reply 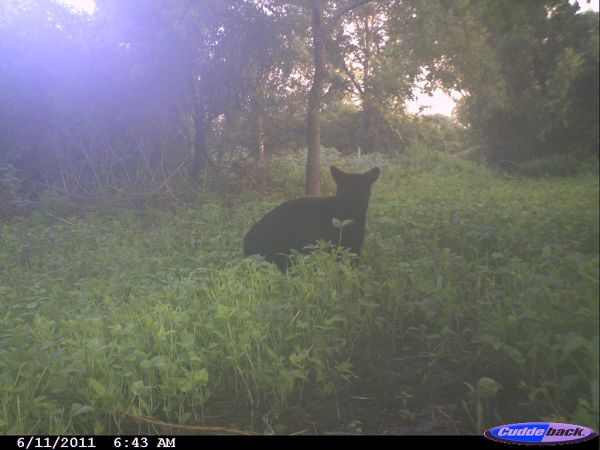 I have an update on this report. I sent the pictures to Cassidy Lajeaune who runs the Atchaflaya Delta WMA and he told me they know of at least 2 bears that have been spotted there. He sent me a picture of one of them taken with their game cam.
Reply

tuffhuntin
hey ricky i emailed you a week or two ago, looking for some advice did you get it
Reply

Ricky Aucoin, Louisiana Sportsman field reporter
No tuff, I did not get your email, please resend it to me.
Reply

tuffhuntin
rick guess it ain't working or something, how bout you try emailing me
Reply

Ricky Aucoin, Louisiana Sportsman field reporter
Tuff I got your email. I just got home from work and opened up the email. Feel free to shoot me any questions you have about the Delta.
Reply

bluecat
Last year I seen a big black bear when I pulled up at the culldesac to check in ....it was standing in the main road about 100yrds away......
Reply

Ricky Aucoin, Louisiana Sportsman field reporter
Bluecat, I had not heard of a bear at the Delta in many years. Usually when someone sees something unusual down there--word gets around fast. I personally have never seen a bear in any woods. Maybe this season will be the first time...
Reply

bonitaboy
thats a bear! Almost just used the bathroom in the chair when I saw that pic!!!!!!!!!!!!
Reply