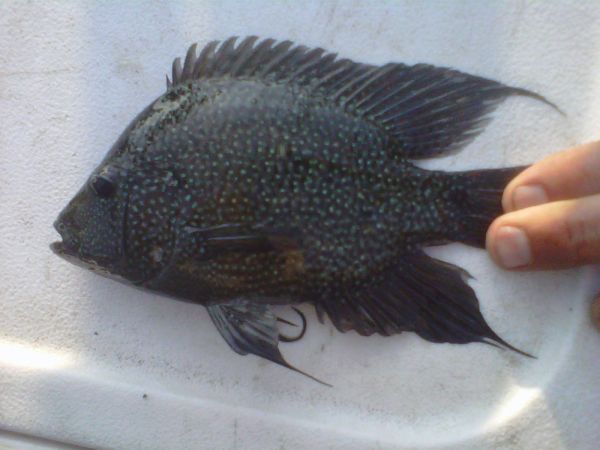 name this fish never seen anything like it
Reply

chefronT
Looks like a.....
Texas cichlid to me. Where did you catch it?
Reply

buttonhook
fish
westwego back by the airport canal
Reply

Thanks I am still laughing!!
Reply

cpipe
rio grande
its a rio grande they got put in the canals around new orleans!!
Reply

Mike Guerin, Louisiana Sportsman Field Reporter
Greg
I name him Greg! Come on people your lack of reading skills reflects badly on the state! He never asked what species it was! hahaha

Just kidding. But correct it is an non-native Rio Grande Cichlid aka Rio Grande Perch.
Reply

AndyGriffith
Gill
I think Gill a good name. If you don't like that, I would call him supper. lol.
Reply

BUDFISH
Rio Grande cichlid
http://www.tpwd.state.tx.us/huntwild/wild/species/cichlid/
Other Names
Rio Grande Perch, Texas Cichlid
Description
Cichlasoma is derived from cichla, the Greek word for 'thrush.' It means 'resembling cichla.' The word cyanoguttatum is also Greek and means 'blue spotted.' Rio Grande cichlid are distinctive in that they exhibit cream and turquoise colored spots, giving them a speckled look. Background color varies from very dark to light olive. Lighter colored specimens usually exhibit five dark vertical bars. Both dorsal and anal fins are long and tapered extending behind the caudal peduncle (fleshy portion of the tail). Unlike tilapia and most sunfishes, which typically have three spines on the anal fin, Rio Grande cichlids are equipped with five to six anal fin spines. Adult males may also develop a pronounced 'hump' on the head which is not present in tilapia. Adults usually range up to about 6 inches in length.
Life History
Like most of its family, the Rio Grande cichlid is generally considered a warm-water fish, and is very sensitive to cold. In general, this fish does not survive at water temperatures below 49°Fahrenheit. The species may do well in heated water, and in spring-fed waters with constant favorable temperatures. Spawning occurs in early spring. Both parents protect their young, which feed primarily on small fish, insects and crustaceans. Adults are also known to consume large quantities of fish eggs when they are available.
Distribution
The distribution of the Rio Grande cichlid in Texas appears to have originally been limited to the lower reaches of the Rio Grande. However, a number of populations have been established in large springs and rivers of Central Texas' Edwards Plateau including the San Marcos, Guadalupe, San Antonio and Colorado rivers. Minimum temperature tolerances in the Colorado River have been measured at 57-66°F.
Other
The Rio Grande cichlid is a fine fighter, and easily caught. It is considered good table fare. The Texas state record was caught in the South Llano River in 2001 and weighed 1.59 pounds.
Reply

sparky38
Why
Why would they put a fish that is sensitive to cold temps and loves to eat fish eggs, in our waters? ......who put them there!!?
Reply

Spartek La
F
Are they good to eat?
Reply

push_pole_prov
unwanted pets
i believe i read somewhere that they were placed there by pet stores when they became overstocked. or possibly the same way south florida is becoming over run with boa's, from pet owners simply not wanting the animal and releasing it into the wild. I could be wrong though.
Reply

Catch Cormier
Rio Grande Perch
I don't pretend to be an expert on this species, but I did sleep at a Holiday Inn Express last night!

Kidding aside, I've written about them twice now in my Fly Lines column - they are a very popular fly rod species in their native south Texas waters, as well as in south Florida and in Orleans/Jefferson parish waters where they now reside. Before we start condemning this species, let's check the facts.

First, ALL fish in low carrying capacity waters eat eggs. Rainbow trout in Alaska consume ungodly numbers of salmon eggs, but the salmon still come back each year in the millons. That's not a problem in south LA. Rios have an 'all you can eat buffet' of bugs, minnows, etc. to eat, which is why they grow bigger and faster than they do in south Texas. I've caught a couple right at the 2-pound mark, and seen some even bigger in Bayou St. John.

Second, they do NOT outcompete bluegill as some researchers believe. If you put 1 bluegill and 1 rio and the bluegill moves off the bed, the rio will indeed take and hold the bed. If a school of bream move in, a rio pair will get run out. Even that's not a problem for rios, because they can live and spawn in waters that bluegill refuse to live or spawn in. Almost to the point of wet mud!

Third, bass LOVE to eat rios. So while they can overpopulate a pond, not any more than green sunfish can, add a few bass and problem solved!

Fourth, do they deserve to be wiped out because they are non-native to Louisiana? If we're going to put money and effort on eliminating a species, we need to set better priorities. On a scale from 1 to 10, with 1 being 'Welcome to Louisiana' and 10 being total extinction from Planet Earth, the silver carp is a 10 and the rio is only a 2. I see too much effort going into removing rios here in Louisiana and none going to eliminating silver carp. Silver carp have the potential to destroy ALL freshwater fishing in Louisiana, not just to take up a tiny niche in the ecosystem like rios do.

BTW, rios are good to eat, but I wouldn't eat anything caught in city canals.
Reply

GoggleEyeKing
Cichlid
I caught one a few years ago in the Bonne Carre Spillway just west of I-10. It was huge. I posted a picture on Louisiana Sportsman and was contacted by a biologist at UNO. He said it was a Rio Grande Cichlid and my catch was the farthest west that one has been caught in Louisiana.

These fish were released into drainage canals in New Orleans and when salinity levels are low in Lake Pontchartrain, these fish migrate to other areas. The danger here is that cichlids are voracious eaters of eggs and fry of other fish. Our native species can be totally replaced over time by these introduced fish.

If you catch any fish that 'doesn't belong' contact LDWF or UNO to let them know where you caught it.
Reply