Southrn Swamp Stomper
I have a quick question regarding a Browning ABolt Rifle. My rifle is a 300 WSM with a boss; I would like to have the boss taken off of the gun if possible. Is anyone aware of a reputable gunsmith that would do this? It would consist of cutting the very tip of the barrel to remove the threaded portion on the OD of the barrel and then coating the exposed metal. Have any of you ever tried to have this done and is it even legal? All I know is it is too loud with the boss and I want it gone if possible.

Thanks in advance.
Reply

BIRD HUNTER
Remove the BOSS?
I have the Boss on my 270. It is a great tool for tuning in your rifle. I agree that it is louder than normal but not enough to remove the system off of the gun. Not to mention the amount of recoil it dampens. Just my opinion!!
Reply

bucksnducks
WHY????
Why in the world would you remove the BOSS??? It's one of the best things ever invented for a rifle. Just go to a Browning dealer and get the non-ported adapter. The noise comes from the ports. DON'T even think about removing the whole thing. You'll regret it.
Reply 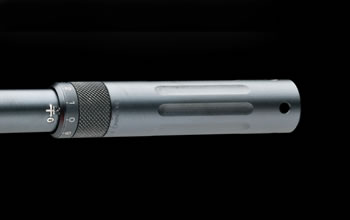 As mentioned above, you can get the Boss CR which is non-ported. At only 40 bucks, it will likely cost you a lot less than the barrel work required to remove the original Boss.

I'm with the others-why do you want to remove it?

Heres a link to the Browning site:

JB
BOSS
My dad had one on his Wichester 270 and didn't like it. He had it taken off and it did not affect the way the gun shot in any way. This was several years ago, not something he did last week.
Reply

Southrn Swamp Stomper
Why...
The only reason I am considering removing it is because from the time I bought the gun I never had to tune it or anything and have always been able to touch bullet holes with it at 100yrds. I originally bought it with the boss on it thinking the gun would have more kick to it; however, after shooting it and being deafened by the sound it has shown to be a pain. So I swapped over to the BOSS CR and it helped lower the blast and I had no change in grouping whatsover so it kinda got me thinking. Do I really need it? I probably will keep the BOSS CR but I really do not like the way it looks, I was just wondering if anyone else had one removed.

Thanks for the comments guys and good luck out there.
Reply

Chris Holmes , Louisiana Sportsman Field Reporter
Keep it
If you're grouping that tight and the CR reduced the noise and you don't have any problems with the recoil- I say learn to like the looks and don't mess with it!
Reply

fisher79
BOSS
I WOULD LEAVE THE BOSS ON AND ALWAYS SHOOT WITH EAR PROTECTION.I KNOW IT IS KIND OF HARD WHILE HUNTING BUT HEARING IS ALOT MORE IMPORTANT!
Reply

deerman24
300 wm boss
this would be a very dumb move. I have owned many guns through my 50 years of hunting. I now own a browning300wm with boss and it is far the best gun i have ever owned. It is a little load i agree. I own another 300wm remington and the recoil on this browning is about 30%less. I can take the loudness
Reply