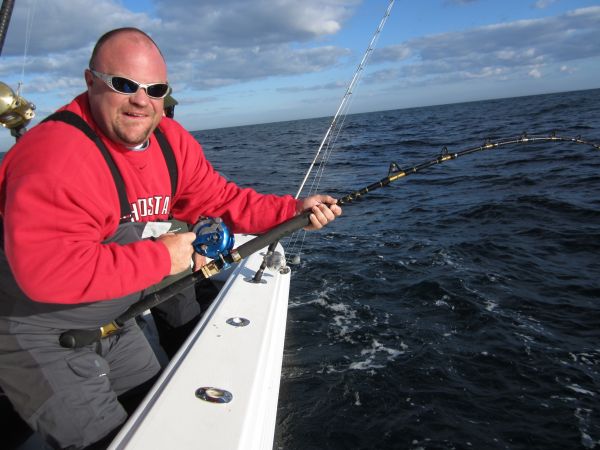 Originally I had Tom Williams, Don Hamilton and gang scheduled to fish the shrimp boats back in October but due to some business conflicts and a trip to Hawaii they rescheduled for an early December trip. The fishing had been slow but these guys are diehards and always make for a really enjoyable trip. (Well somewhat enjoyable cause I did have Capt. Josh on board) Anyway, we headed out in search of tuna. After burning through more fuel that I care to mention and a ton of daylight checking shrimp boats and floaters, we pulled the plug on the tuna fishing. Time for Plan B - Meat haul. After it was all over we ended up catching our limit of AJs while releasing many more and also caught some nice Snowy and Yellowedge Grouper. Some days it just doesn't happen so you have to be willing to make a change and just go catch fish! Most customers really appreciate that at the end of the day.
The AJs are extremely thick right now and are eating just about anything dropped down to them. Hardtails, jigs and even dead pogies but the easiest method right now is with giant mullet. Cast net a dozen or so of these guys, attach them to a 15/0 circle hook on a 300 or 400lb mono leader with 24 oz of lead and you are ready to roll. Go to any rig in depths of 300ft + drop down 100 - 150 ft and its game on! Simply leave the pole in rod holder until its bent completely over then see who wins. As far as the grouper, most of the time we use the same set up as the AJ rig but grouper fishing heavily depends on current. Get to deeper water, usually 400+. Use pogies or live bait and bring a ton of extra terminal tackle. You will lose a small fortune in lead but if you are not getting hung up, you are not in the right spot.

Capt. Tommy Pellegrin
REEL LIFE FISHING
Gray what you trying to do knock the fish out, 24 oz of lead, 15/0 hooks and 300 pound leader. You need an 80 wide just to reel that in.
Reply

Capt. Gray Long
Capt Gray Long
Tommy, I knew you would love that. I almost mentioned how that kind of tackle would make my buddies in Cocodrie cringe. Hey, its the Venice way! By the way, it was actually 50's.
Reply

Capt. Tommy Pellegrin
REEL LIFE FISHING
Gray, Just think of this. One of the last trips I make in October was grouper and I was using a Abu Garcia Revo Toro 60 with 65 pound braid on a Ugly Stick Tiger Lite Jigging rod in 365 feet of water. This reel is a low profile reel like a bass reel and i caught my limit in scamp and gag grouper. I was using the new High Life jig at only 7 ounces.
Reply