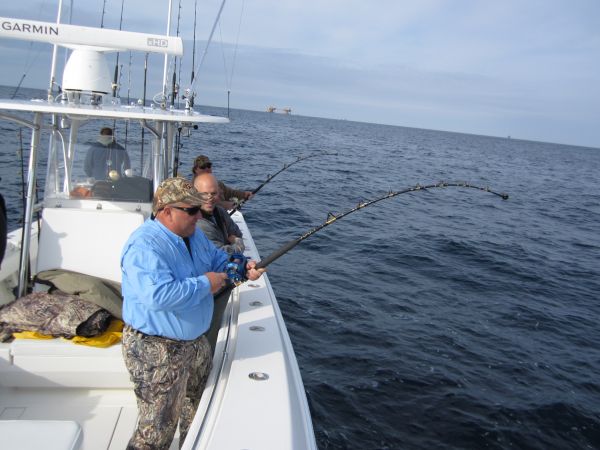 Had Perry Askew and some of his customers down for relaxation, drink a few beers and hopefully catch a few fish. This was the first trip with Perry but I could tell from early on in our planning stages that this would be a good trip. The weatherman nailed it and the seas were the best I had seen in quite a while. After bumping around pulling baits and nothing to show for it other than large sharks, Kings and Cudas we moved a short distance to get our Amberjack. The guys made quick work of their limit plus a few for catch and release. We then moved to a tied off shrimp boat were we managed 3 or 4 hammer Black Fin Tuna before the bite abruptly ended. The seas were so nice we decided to make a long run in search of wahoo. We arrived to find beautiful water and a nice temp break so out went the lines. We ended up going 2 for 4 on wahoo and would have probably caught more if we could have kept the AJs off our diving baits. We caught more jacks trolling baits than I have ever seen. It got so bad (good problem to have) that every time the drags started screaming the guys would run to the front of the boat so they wouldn't have to reel another one in. The crew was done so we pointed the Contender north and made quick work of the ride back to the barn. Good guys, good times and good fishing!

January and February look to be good months especially if we get some breaks in the weather. The Wahoo fishing should continue to get better and the Yellowfin shouldn't be far behind. We are also catching deep water grouper, blackfin tuna and of course Amberjack.

Capt. Tommy Pellegrin
Go South
Gray, was Josh on the boat? I only ask because the jacks looked pretty nice.
Reply

Capt. Gray Long
Capt. Gray Long
Funny Tommy. Actually I was surprised we caught anything with him on the boat. I think he wants to deck for you this summer.
Reply

Capt. Tommy Pellegrin
REEL LIFE FISHING
Gray, I will need another Captain for the HIGH LIFE this coming year. Tell him to apply for the job.
Reply