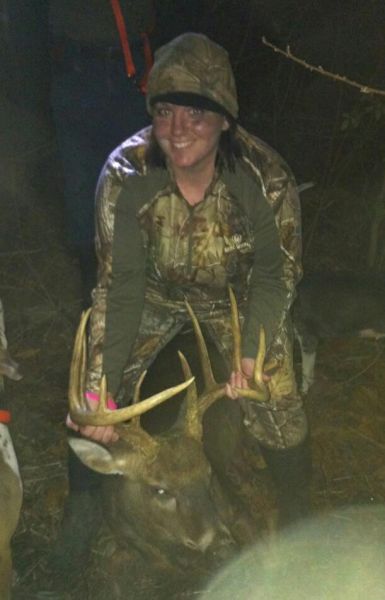 Hi, I wanted to share my first bow kill with you all. This is a story I posted on another site...

Randy Norred
That was an awesome stoty!! And Kill. All you have to do is teach Rodney to shoot like that now.. LOL.. Great JOB!!!
Reply

Deer Hunter1989
Well deserved deer for you, enjoy it, i shot a 8 pt 2010,another 8 pt shot 2011 bigger than the other one, now cant wait till mid january to hunt the rut to try go bigger than last one,good luck..keep hunting,
Reply

Randy, Rodney hits vitals every time he shoots at foam, he just has some bad luck. That pink wristband thats on my wrist in that pic is deemed 'lucky' and he is wearing it now! Lol we shall see if he gets one tomorrow.
Reply

CajunHuntress
I am very proud. I've only been hunting for 2 years. I hunt various WMAs and was never expecting to harvest a great buck like that. I dont know if I'll ever top it but I darn will try!
Reply

rougebacala2
That's what i like about it when the Ladies have a great hunt, you get the whole story, I almost felt like i was right there helping you find that deer. Great Deer, Great story, thanks for sharing!
Reply

dustmac22
WOW!!! Way to go! You got the buck of a lifetime. With a bow. On public land. Male, female, kid, whatever... that is getting it done. Congrats on a great buck. He will look good on your wall. Nice write up too.
Reply

CajunHuntress
He actually scored 142'!!! Super pumped for this season!!
Reply