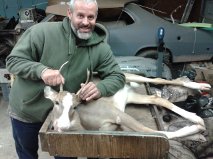 It happened just outside of Ringgold Louisiana on a small cut-over behind my brother’s house. It was the afternoon of January 1, 2012 so I decided to spend it doing one of the things I enjoy most—hunting. I had been in the stand for a while keeping careful watch on the five shooting lanes in front of me. I would repeatedly scan from one side to the other and then back again as the daylight hours slowly came to an end. It was on one of those left to right scans that something caught my attention. I thought my eyes were playing tricks on me and that I was seeing things. I made out what I thought was a man walking down the shooting lane towards me wearing white rubber boots and with his shirt partially unbuttoned and wearing a white t-shirt underneath. There had been workers not more than 1000 yards away installing a gas well so my first thought was of a “stray” worker had aimlessly wandered into my food plot and surely would ruin any hopes of seeing a deer. With that thought in mind, I quickly became irritated… until I took a closer look again with my scope. I suddenly was amazed (and somewhat confused) at what I was seeing. Was it a dog, a goat, or possibly someone’s lost colt? No! It was one weird looking whitetail deer! I knew immediately I wanted to take him. He kept walking down the shooting lane towards me until finally he turned broadside. It was at that instant that I dropped the hammer. “Wow, what have I just shot? No big rack but INDEED a trophy of a lifetime.” What an unusual but awesome looking spike buck! There was no doubt about it – this would be a full-body mount! When I arrived back at the house and told my wife, Holly, about my plans of getting it mounted, she replied, “You’re not seriously going to mount that thing are you? Why, it doesn’t even have a trophy rack!” “Yeah, but it’s a trophy to me”, I replied. “Besides, how many people do you think are ever going to have a buck that’s as unique as this one? That’s what makes it a trophy to me.”
(P.S. – Notice the scar on the front left leg? That was put there only a couple of weeks earlier by a good friend who swore he had hit a deer… which at the time we found neither hide nor hair of. He marked him and I harvested him.)
Reply

1-coonass
Thats one of a kind! Thats gonna be a great looking mount, post us some pics when u get him back..congrats on a 'trophy buck' in my book.
Reply

DannyI
Man that thing will make a surefire conversation piece. Face almost looks like a calf by looking at the nose.
Reply

Mike Guerin, Louisiana Sportsman Field Reporter
Crazy! I have seen pictures of piebald deer before that had much more white but that one sure does look the funniest. Congratulations! Most hunters will never see or kill one.
Reply