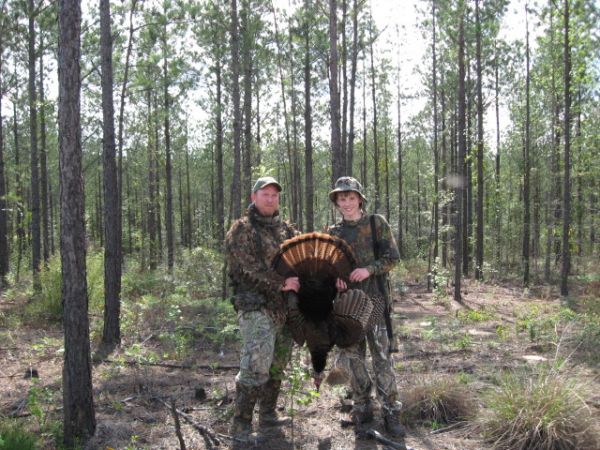 Took my 13 year old nephew turkey hunting this weekend for the Youth Hunt. Let me tell you, the turkeys were doing their thing.

Didn't have much luck early on on the first day. But finally struck one up around 10am. Called and he gobbled, set up, called a couple of times, and he was on his way. Gobbled one more time and then he came out right in from of us at about 25 yards. The nephew put the heavyshot hammer down on his son!!! Lots of celebrating and picture taking followed.

Come to find out his mother, hmmmm thinking that she would never have to pay up, had told him that if killed one that she would have it mounted for him!!! Well needless to say I didn't end up with any meat to eat. That boy made her keep her word!!!

Day 2
So, as usual waking up the second day is always harder than getting up for an opener, but after the bitterness of waking up early a second day wore off we made it to the woods just as the first crows began to make noise.

Struck one up about 30 minutes after daylight. He was hot and coming in, unfortunately for us he had a lady friend that was more interested in my calling than he was and beat him there by about 5 minutes, she never busted loose, but she knew something was up. The gobbler made it to us, but the boy was sitting about 10 yards from me and he never saw the gobbler. The hen went back the way she came and the gobbler went back out to about 50 yards and strutted and gobbled for about 30 minutes until I guess he figured we were too stupid to know we were supposed to come to him. Note: I was just soo freaking happy that the boy didnt get excited with all that gobbling and let the ol hen have a load when she cleared the little rise we were behind!

So after that, We stopped at a couple of more places with no luck. But, on the third place we tryed. I called and a gobbler sounded off! We got set up real quick and I called a few more times. He only gobbled twice more, and both were early on when he was still a pretty good way off. I kept purring and putting on my slate call and about 10 minutes later. He popped out in front and to our left with 2 hens in tow. I saw him and he was already in range, I wispered to the boy who was sitting about 10 yards to my left and asked if he saw him. He whipped his head over toward me like somebody and slapped him and said NO. Well, I figured the gig was up, but luckly enough there was a bush between him and the tom and neither one could see the other. He got on his gun and when the tom cleared the bush he put a load of heavyshot to him. Another gobbler bites the dust.

I have to say, I don't know if I was more happy when the toms jumped in the air and hit the ground or if he was. I know I had as much fun as when I kill one. And my dad was there to witness both kills, which makes it even better. He said that he saw the tom today before we did. He was sitting about 50 yards back from us and had a clear view of the second turkey. What a weekend!!!
Reply