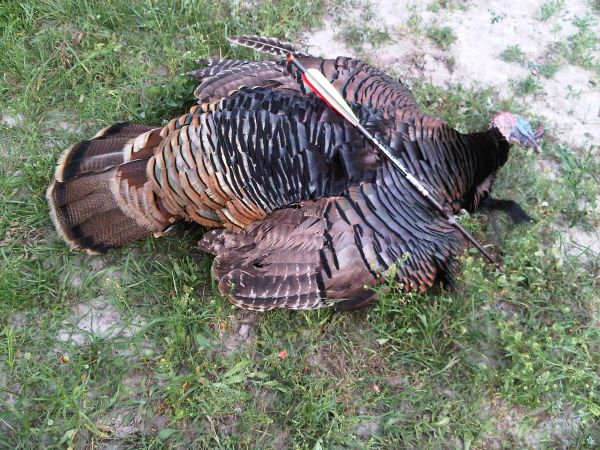 I headed down to South Texas with a few friends this past weekend to turkey hunt. My goal was to take a bird with an arrow. I borrowed a crossbow from a friend and brought my compound bow with me on the trip.

I set up my pop-up blind in an area that I had seen two big toms strutting in the day before. There were Gobblers sounding off all around me at first light. I could hear the birds gobbling on the ground for the first hour obviously with hens. About 9:00 am I was calling to a gobbler to my right when I heard a thunderous double gobble from merely ten yards over my left shoulder! I got into position with the crossbow as two strutting toms made their way across the sendero in half strut working their way around to pick a fight with my B-Mobile decoy to the right of me. A hen walked into view standing only ten yards away. Just then, the already howling wind gusted and knocked my blind in on me causing the hen to run away. I immediately made some cuts on my mouth call and got a quick response from the two toms from the heavy cactus and mesquite thicket in front of me. Thank God, I thought as I saw the two birds shoulder to shoulder coming out of the brush headed straight over to talk some sense into B-Mobil. I only had time to get the crossbow aimed broadside at the biggest bird and 'WHAP', my arrow connected. The big bird was flopping to his death retreating only ten more yards before giving up the ghost. His twin then took full advantage of his newfound supremacy. He approached my downed bird and started pecking him in the head. I quickly grabbed my compound bow and knocked an arrow. Estimating the yardage, I took the shot, “Swoosh”, a miss, right under him! The bird ran only a few yards to his left and stopped, giving me time to knock another arrow, “Plunk”, right over his back! This time the bird made the cover in a hasty exit. To my disbelief the bird started gobbling again after a few minutes. I began making some soft clucks and purrs and cocked the crossbow once more. The insistent tom returned after about ten minutes and angrily started pecking at my dead tom in the head once more while on the ground. I steadied the crossbow and estimated the distance,” Crack”, right under him! Three times the charm I said as he cackled and ran away further into the cover.

I called my buddies over and we took pictures. They had scored on a tom at first light and were driving around the ranch. I told them my story and they were amazed of the persistence of the bird. They left in a ranch truck and I headed down the sendero to get my vehicle parked away at a distance. About half way to the truck, I heard a gobble coming from the area of the blind that I had just left. I called my two friends and told them to get to where I was just hunting quickly! I made it to the truck and listened to the bird gobble 4 more times from what seemed like the same area of my set up. After a short time “BOOM”! My buddies had made it back to my setup to find the bird back again aggressively pecking my dead bird in the head. They shot and killed the bird while he was standing over his dead buddy! Wow, talk about persistence! I don’t think I’ll forget that one.

Check out the video of the hunt at