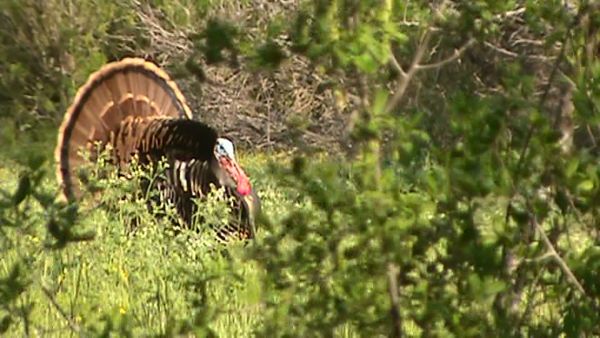 While in South Texas, I was asked to guide a 16 year old boy and help him try to get his first turkey. We set up in an area Saturday afternoon were we had seen a huge single tom strutting with several hens the day before. I put out a hen decoy near the strut zone not terribly far from the feeder that I assumed the hens would come to during the day. The gobbler that we had seen with the hens was a large impressive bird with a nice beard and was following those hens wherever they went during the day, “Henned Up” so to speak.

At 2:00 we were set up and ready at the base of a sweeping mesquite bush on the ground in my gobbler loungers. After about twenty minutes of calling, a gobbler sounded off behind us! The bird came within 40 yards of us and spied the hen decoy. The big tom strutted on the road and hung up, he could see the hen decoy. The boy could not turn around enough and the bird was positioned just far enough to our right for him not to be able to shoot. After a while the clever tom had enough of our game and retreated back into heavy cover gobbling in ever direction as he walked further and further away.

Shortly after this, I spotted movement to our left as the hens that we were expecting showed up and made their way to the feeder for a quick bite before moving on. We were ready and in position for the Tom if he were to trip up and show himself. As the hens approached the feeder, the leader of the hens spotted my hen decoy. She immediately started clucking and calling her pack together in protest of the intruder hen. The hens approached the decoy like a gang of street thugs, they began strutting and swatting the decoy while sounding their fighting purr sounds loudly and aggressively. To my surprise, I noticed that one of the hens had a long beard, a true trophy in Texas.

Suddenly, I heard a faint gobble from the distance and then moments later the drumming to our left. I told my partner to slowly move his gun and get into position as the huge shiny tom came into view. He was in full strut with a huge beard and was doing his best to impress those ladies. He was completely fixated on the ruckus of the fighting hens just to our right as he moved from left to right only fifteen yards in front of our set up. I told the boy that I would make a call so that he would lift his neck and come out of strut for a shot. He said he was ready. “Cluck, cluck”, “BOOM”! He missed, right over him! The bird was so close, maybe too close for that tight choke and the nervous anticipation of his first kill. I’ve missed a few birds in my time, I told him. It looked like a clean miss as the big tom ran off unhurt. You know that it feels worse when a kid misses than it would if you miss yourself.

About thirty minutes later behind us the big tom and his ladies appeared once again. It was obvious to us that he was unscathed and still trying to convince the hens that they were missing something. The birds walked off with the gobbler in tow strutting the whole time. Maybe next year!

-Duckaholic-
It's OK
My buddy's 11 year old Grandson killed this Gobbler the next weekend in the same spot 10 minutes into an afternoon hunt. He came running in with no hens and met his maker! He was huge with an 11-3/4' beard. I'm mounting the fan, beard and spurs for him right now.
Reply

turkeyhunter
re: video
great video. I have hunted turkeys in Louisiana since 1966 and in Miss for 20 yrs or so. I have never seen a hen strut. Goes to show ,if you are a turkey hunter , you will never quit learning about them nor will you ever stop getting outsmarted by them .
Reply

turkeyhunter
re: miss
Misses happen to the best of us. With these tight turkey chokes and turkey loads you must shoot it like and open sight rifle and as was told as a boy ' hold a tight bead on him with cheek down firmly on the stock.'
Reply