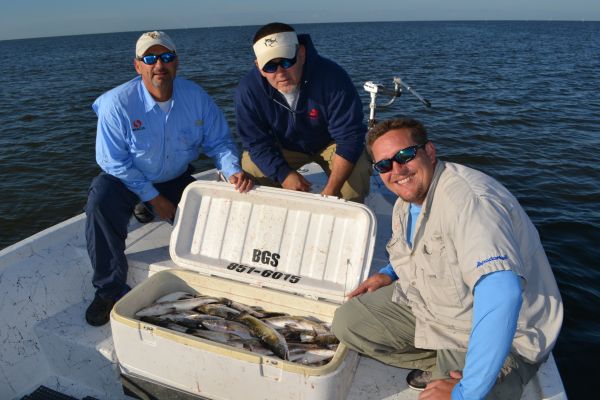 Looking at all the great reports it appears the speckled trout fishing has exploded throughout southeast Louisiana. Everybody is catching fish right now and Dularge is no exception. Due to the weather last week through today we postponed trips every day except Thursday,Friday & Saturday mornings. We still managed to catch hundreds of fish including reds & trout! On Thursday I fished with Andy Rulf,Steve Hamilton & Amaury Maza. Little did they know that they would be in for a treat loading up the big Blazer Bay with hungry reds & trout. The trio crushed the trout at our first stop catching trout 2 at a time on almost every cast. The double rigs were working overtime with the LSU chubs doing the damage like they always do. Chicken on a chain was a close second as the bite was fast & furious with 14-19 inch trout flying in the boat from all directions. Sure is nice when it works out this way! Andy AKA 'The Machine' was well oiled and whacking the fish as was Steve & Amaury. We called it quits at 7:50 AM with 100 nice trout on ice. Since it was still early I gave the crew a choice of going to breakfast at I Hop or chasing down some redfish. After a short debate we decided to hit the reds and it only took 1 stop as we found the bronzebacks starving and eager to eat up our swim baits and spinner baits. We fished a couple hours and after hooking up with at least 20-25 reds we called it a day. As usual, Andy & his crew were a blast to fish with and they sure had lots of fillets to bring home. No place like the DU! Good luck fishing.

flyfisher66
Where
They at the islands yet?
Reply

Capt Bill Lake - Bayou Guide Service
Island
Yes the trout have showed up at the islands in big numbers. Plenty of nice fish 15-20 inches !! It started early this year and the fish have been stacked up when conditions are right. Good luck!
Reply