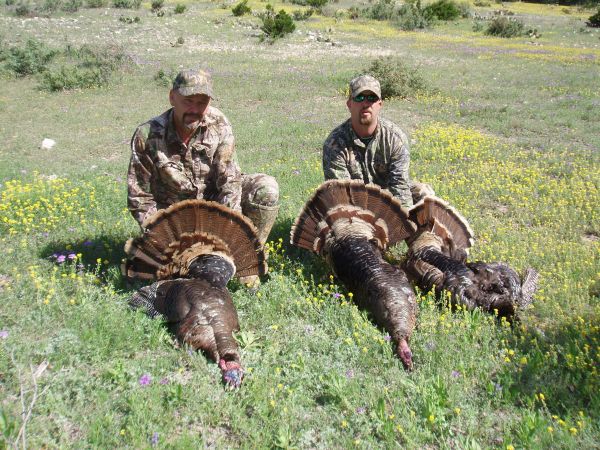 For all the Turkey hunters out there... I started on a quest to kill a World Slam in one season on March 30th and on May 3rd , it was over!
It started off on a Rio trip to Sonora, Texas on March 30th where I killed 3 Rio's in a day and a half.
From there I was back home in the Swaps of the Atchafalaya Basin for my Easter which proved to be the hardest of all 6 to harvest!On April 5th, after 5 days of hard hunting, I finally got my Eastern.
Then I took off for South America to the jungles of Carlos Cana Cruz to hunt the Oscellated turkey which proved to be almost as tuff as the Eastern in the Basin but ended with 2 dead birds and a Brocket Deer.
After a few days of work, I took off to St. Cloud Florida to hunt the Osceola. After 12 hours of driving, 5 hours of sleep, it was the shortess of all the hunts lasting only 10 minutes and ended with a real trophy bird. 1.5 inch spurs and a 10 inch beard!
After having the three hardest out of the way, it was back down South to Durango, Mexico for the Goulds! First morning, 3 hours into it, my first Goulds was dead!
Last, but not the least, my friend PJ and I took off to Wall South Dakota for my Merriams.The merriams has been the bird that has given me the slip in the past so I was a little nervous that it might not happen. But the first afternoon, on May 3rd, I had the last of the World Slam on the ground!We both took 2 Birds on that trip and headed back home.
Counting Down the days till next years turkey season...
Reply

GI-Islander
Congrats!
That's a heck of a bucket list accomplishment. A true congrats to a heck of a hunter.
Reply

MICAH M
Thanks!
Thanks GI_Islander, I hope to do it again one year!
Reply

Scouting
One man membership for 5 states of hunting
Tough, but Fun Sunday in Shell Beach
Let us HELP the Shrimpers
Another Day Playing with da Reds