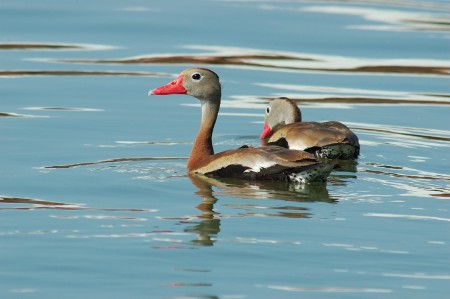 Here is a picture of a Mexican Whistling Duck. It is also known as a Black Bellied Tree Duck ? Picture taken by Scott Schexnaydre in Destrehan La.
Reply

GreenHeadKiller
Thanx that helps I know what that is now
Reply

Guy L
I have seen them several times in the past in the trees of Chicot State Park. They scare the snot out of you when you are concentrating on a quiet approach in a little cove to fish and a pair of these things takes off from the branches above your head. They let you get pretty close before they abandon their tree, close enough to startle you. Never saw one in the marsh, but have seen them more than once at Chicot.
Reply

Landon C
If anyone wants to see some of these ducks just go play a round of golf in the evening at Willowdale Country Club in Luling. They roost in the trees behind the 15th hole.
Reply

stopandgo
I is good to see these birds making a return to South LA. I have seen a lot of the Fulvous Whistling ducks this summer. hope I get the chance to bag one this duck season.
Reply

scratch
About 1,000 of them spent the spring in the Audubon Park lagoons. And no, they were not zoo pets. Aparently they have been coming in larger and larger numbers to the area presumably to nest.

They are also all over the Houston area. My dad had 4 come into his deer feeder in Cypress and I saw a bunch of them during the 4ht of July weekend. Used to kill and see them in the Gueydan area where they were called Mexican Squealers. They are actually good to eat.

Maybe we will get a good population in Louisiana to supplement our bags when things get slow.
Reply

Jose Wejebe
The black-bellies have been showing up in SW La as well. I've heard there is a large nesting colony around Lake Arthur. We've killed a few at our lease in Klondike- the limit is 6, just like teals, greys, etc. Unlike the Fulvous which nest here every year, the black-bellies seem to stay year round. I know the rice farmers and crawfishermen in that area are having a problem with them destroying the rice in flooded fields.
Reply

David B.
Thanks Landon for given out the secret spot! By the way, I saw the pics of the 12 you bagged last week, nice shooting. Hope they were tasty LC! Kind of upset you didn't invite me to the BBQ.
Reply

Engelsmung
I've seen 'em in Chicot Lake near Ville Platte, Spring Bayou near Marksville, Savanne Neuvelle near Creole, and south of Lake Arthur. They fly slow and straight, and announce their arrival far in advance, and so are easy to shoot.
Reply

avoyelles2006
Shot 4 of them in about 3 seconds last year. They sure do fly slow. Thought they were immature geese or something. A local at that lease told they weren't any good to eat, but we made a gravy with them a few grey ducks and they were very good.
Reply

super duck
anybody know what they eat fish or grass
Reply

Jose Wejebe
-they are good eating. I had heard the meat was oily, and the meat did appear richer than the other ducks, but very mild tasting. They are harder to pluck. From what I've seen they eat nothing but grain. Everyone we killed had a craw full of rice.
Reply

MICAH M
They eat grass and seeds.Never killed one with anyhting but that inside them.Hunted in Lake Arthur last year and they where as thick there as I had ever seen them.They where in the marsh by the thousands.I killed my limit in 4 shots.They are easy to kill and are great eating.They are as good as a woodduck in my opinion.
Reply

Duck enticer
I made a comment about this in another thread recently; I have been seeing Black bellies over my house in Crowley (Acadia Parish) lately. It is not uncommon to see Fulvous, but black bellies are rare! I am hoping that this is a hint of things to come.
We use to kill the snot out of the black bellies and fulvous whistlers at Sabine. They are Stuuuuuuupid! I also killed a banded black bellied whistler that I think was banded somewhere around the Corpus Christi, TX area.
Reply

Duck Nasty
We have been having them on our lease for about 4 yrs now. Every year its more and more. They even use some of the wood duck boxes we have out. Have a crap load of eggs. They are really stupid.
Reply

eastofmrgo
LETS SEE, ther are plentyfull,Stupid as a dos gris, slow and straight flying(easy to shoot) , no known limit and they taste good. Heck I may have to start duck hunting again.
Reply

NOLA DUCK
We have shot a bunch over here around Lake Charles. I still have them in the freezer so I'm not sure how they taste.
Reply

"The daily bag limit on ducks is six and may include no more than four mallards (no more than two of which may be females), two canvasbacks, one pintail, three mottled ducks, one black duck, two wood ducks, two scaup and two redheads. "

If you notice, there is no mention of gadwalls, widgeon, greenwing teal, bluewing teal, ringnecks, etc. If a duck is not listed simply means you can have up to 6 as part of your daily bag limit, i.e. 4 mallards and 2 black bellies would be a limit, as would 5 black bellies and 1 pintail.- I'd like to see someone try and explain having a limit of ducks, plus additional black bellies and argue they were legal because black bellies weren't mentioned in the regs.
Reply

The black bellies are included on the daily bag limits for waterfowl.
Reply

BIRD DOG
I have been seeing them around West Pearl just about every day.
Reply

duckduckshoot
We have them all over our lake at the lodge. They are a good looking bird and fast. Really fun to shoot

boug23
They are ducks - plain and simple. Count them in your bag limit just as you would a teal. As some one mentioned earlier they can appear to be immature specs for a moment.
Reply

You CANNOT count them in their own seperate limit. They are ducks just like the rest of them. They count in you daily bag limit.
Reply

Bloodline boy you are giving out information that is wrong. They are included in your daily bag limit.
Reply

Guy L
Hey bloodline, remind me not to hunt next to you. According to your theory, you can legally take in one hunt 6 gray ducks, 6 wigeon, 6 teal, 6 spoonbills, 6 whistling ducks, plus a combination of 6 mallards, pintail, woodduck, etc.?????? None of these have a specific limit listed.

"The daily bag limit on ducks is six and may include no more than four mallards (no more than two of which may be females), two canvasbacks, one pintail, three mottled ducks, one black duck, two wood ducks, two scaup and two redheads."

See where it clearly says daily limit on ducks is 6 (ducks meaning all species of waterfowl), not 6 of each species. It has a key word AND (which means that OF THOSE SIX DUCKS IN YOUR LIMIT) there are specific restrictions on the particular species listed. IF you read, you will note that where the law INTENDED to allow hunters specifically more of a particular species, they wrote it out in detail.

IN ADDITION to the daily limit of ducks, a hunter may take 15 coots.

If you believe there is any way whatsoever you can legally take 18 or 24 ducks in one day you are nuts, and your game warden buddy too. Just have your bond money ready...
Reply

remford
haha.. ya'll didn't get what he said.. he said he hunts with a federal game warden. in that case, you are allowed to shoot whatever you want and screw the limit.
Reply

fishhead
bloodline where are you hunting?? I could use the extra $$ i get when I call Operation Game Thief!!!
Reply

Bloodline we all know that we can shoot 6 tree ducks in one hunt, but after those six our daily limit is full. You can't shoot 6 other ducks in the same hunt. Thats crazy.
Reply

cjtdeerslayer
like we dont have enough things from mexico invading our lands! send them back with the rest of the imagrants!
Reply

Marshwalker
I've been duck hunting since I was really young and never saw one of these things until a couple years ago. I was running a push boat at a grain elevator on the Mississippi River one morning and noticed a bunch of these ducks on the tops of the barges.... I drove the boat closer to check them out and couldn't for the life of me figure out what kind of duck this was.... then I started seeing more and more of them around... I was scouting in central Louisiana this weekend and saw a bunch of them up there... i guess they are here to stay... can't wait to tasted them over some rice... ha ha h a.... hopefully i'll get a shot or two at um this year.
Reply 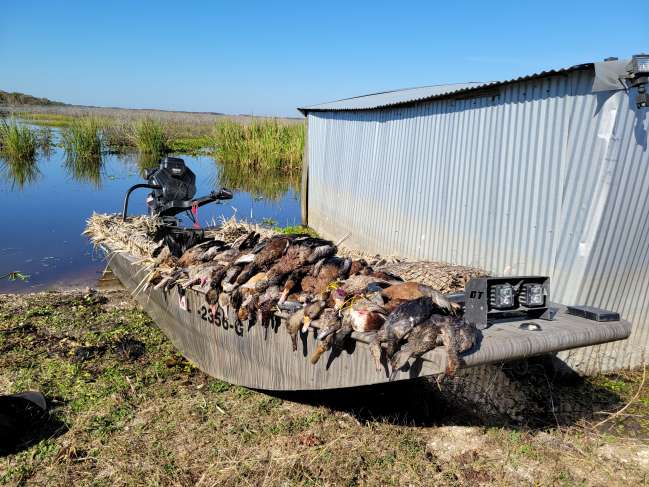 Squealer palooza in Klondike, LA. 60 of them bad boyz. D&M Waterfowl will put you on 'em.
Reply

radley112
The Black-bellied Whistling-Duck is a boisterous duck with a brilliant pink bill and an unusual, long-legged silhouette. In places like Texas and Louisiana, watch for noisy flocks of these gaudy ducks dropping into fields to forage on seeds, or loafing on golf course ponds. Listen for them, too—these ducks really do have a whistle for their call. Common south of the U.S., Black-bellied Whistling-Ducks occur in several southern states and are expanding northward. Slope unblocked is a popular y8 game that features an infinite mode.
Reply

4422
Nice post!!! Thanks for sharing this interesting article.
https://www.hemeldrywall.co.uk/rendering.html
Reply

drdiddy10
Lol they're so cute, and tasty indeed. I've had the pleasure of trying them a couple times after a hunt.
cheap bathroom remodel
Reply

pagefitzpatrick
They look most like ducks, but their lack of sexual dimorphism, relatively long-term pair bonds, and lack of complex pair-forming behavior more resembles geese and swans.
Foundation Repair in Nashville, TN
Reply

marosol
They let you get pretty close before they abandon their tree, close enough to startle you.
website
Reply

edgardu
Thank you for sharing your talent with everyone. You are an inspiration. I just stumbled upon your blog and wanted to say that I have really enjoyed reading your blog posts.

meganfox19
This duck has a rather distinctive red beak. wordle game
Reply

edgardu
Thankful To You For Sharing Amazing And Unique Content On Your Web Blog. Please also check our website at

caughtsomefish
These are genetically closer in relation to geese and are often referred to as tropical geese. WF doesn't want to re-classify them as such because of the insane limits on geese.
The have more rods in their eyes than standard ducks and often do their feeding at night. (report I read a while back but can't seem to find the link to it)
Reply

ernserhjhte21
I know the rice farmers and crawfishermen in that area are having a problem with them destroying the rice in flooded fields.

Leoreo
Nests in tree hollows where a limb has snapped or the trunk has decayed. They also use nest boxes and will occasionally nest on the ground. Both sexes contribute to the nest location selection. | www.laredodrywall.com
Reply