Louisiana's health department has recalled oysters from one Cameron Parish harvest area and has closed it to shellfish harvesting because nine people got stomach illness after eating oysters gathered there.

The Department of Health and Hospitals order Friday recalls all oysters harvested in West Cove off of south Calcasieu Lake since Dec. 28, including shucked, frozen, breaded, post-harvest processed and oysters for the half shell market.

Department spokesman Ken Pastorick said the recall involved about 500 sacks of oysters and health officials were working to find out where they were distributed and pull them from sale. The closure is expected to last at least three weeks.

The department says nobody was ill enough to be hospitalized. It says they may have had norovirus, which causes vomiting and diarrhea.
Reply

Admiral Rabbit
Bob...I feel sorry for the visitors when it's just a one day warning in a yesterdays' newspaper...how did Andy Rooney say it ' the Devil in the small print and 'Ya all come back now'...seems the State may be doing right (for the moment) but many retailers must be grumbling...cheers to'ya
Reply

motorboat
I ate several dozen over the weekend. Still here to type about it!
Reply

poppincork
Motorboat 'several dozen'!! You built up an immunity to the virus. Edwin may soon be a spokesperson for the La. Oyster Council! He's a good role model on how to get ahead in La.
Reply

Admiral Rabbit
Cork...'ya noticed the rose on his lapel ???...I talked to him at a Kenner-Italian Seafood and Garlic promo years before the 'Black Bird w/'da Derby' got him...think he had the same rose on ??? (anyway. he could always handle dry kidding)...cheers
Reply

That guy in the white boots
Unless you live in west Louisiana, you probably never eat oysters from that parish. Most of what we get (at least me)in Baton Rouge and New Orleans and Lafayette, are from the eastern part of Louisiana. Most of the ones I get come from Guidry's in Lafourche parish. They are awesome. The oysters that come from the west aren't really that good. Got a funky taste. Even without the added rotovirus. 500 sacks isn't a big batch either. Be safe though! I hope it will drive the price down.
Reply

poppincork
Looks like Edwin is gonna have his own show! Where is Guidry's , white boots? I get mine at Margie's in GM; very good!
Reply

That guy in the white boots
In Larose, cork. Collins in Golden Meadow too. Both are commercial.
Reply

abeastandasavage
i would rather eat oysters from west la., than eat oysters, fish and shellfish from all these foreign countries, where none of them is checked by our lovely government and drives the price down for our own fisherman, where it doesnt pay them to even fish anymore!!! if i'm going to get sick, i want to at least get sick by american seafood!!! sounds stupid, like you think!!!!
Reply

That guy in the white boots
anybody say anything about foreign seafood? Or are you just making a statement, cause I do agree with you beast. Did you think what I was saying is stupid? Or did I misinterpet your post? Im confused. My reasoning for posting a response was to keep the local fisherman from suffering due to an unfounded scare leading to no one buying their oysters. Duh.
Reply

abeastandasavage
may non, not couyon(stupid)!!! you misinterpreted what i said, or it is probably the way i said it, sorry!!! i actually think we said and mean the same thing bootes! sorry again, beytie!! excuse my french!!!
Reply

That guy in the white boots 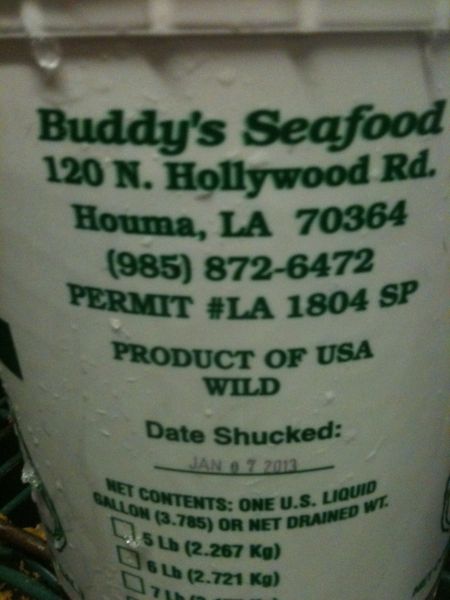 No worries beast. That's why I hate text. It really can obscure language. Got some new ersters in the cooler today. Got em from Houma. I move about 800 gallons a year. I can almost tell where they are from by eating them. Only use LA oysters, and shrimp.
Reply

abeastandasavage
la. the best seafood in the world, just aint no doubt about it!!!! ate some beautiful shrimp in georgia, taste like rubber, no kidding!!! la. cant be beat, dont know why they taste like no other, but they do!!!
Reply