the almighty stuck
Just wandering if there is some trick of the trade out there to get my deer to move sometime other than 8:45pm to 3:45am. They are very active at those times but its quiet during the day whether I'm there are not. When I put out corn I get in and get out with clean clothes and hunting boots on so I don't think I'm disturbing them. Not to mention I'm in a box stand of the ground hunting too so I really don't think once again they are going around me cause of scent. Feeder is around 75 yards away from me. Anybody got ideas?
Reply

justsomeguy
Not really much you can do. The deer go nocturnal if there are lots of hunters in the area. Not everyone gets to hunt in areas where the deer are more like farm animals instead of ninjas. Next year you could try to get everyone in your area to hunt less:) On my lease once rifle season starts all the deer go nocturnal, except the young dumb ones. If you figure out what to do let me know.
Reply

deerman24
Why should they move. You feed them so they do not have to move long and far to eat. They know when people are around and it usually is not at night. This is one of the drawbacks of feeding deer.
Reply

bigjim
You've made them nocturnal with large supply of corn. They mill around in thicket then show up at corn after dark and feed all night and interact, rut all night long then leave at 5 am and head back to bed. Stop feeding corn or feed a lot less and hunt trails as far away from corn as possible that lead to and from bedding areas. Next year plant good plots, if you want to feed put a feeder in trail or bushhog lane away from plot. This will give them a small taste and create a pattern then they will go feed like deer do.
Reply

BIRD HUNTER
If you plan to continue using a feeder try feeding them less. I would set your feeder to go off around noon. This way the feeder is not going off during the prime time of hunting. Have to remeber this is not Texas. Also limit the amount of corn that is on the ground. This will help with other animlas competing for the food. I have had sucess this way. I would only allow my feeder to go off for about 6 seconds 1 time a day. Sprinkling corn on the ground not flooding the area with it. This will also help you save a little money. I filled my feeder that hold 250 lbs of corn in October last year and it still had corn in it the last week of the season. Some may say that it is not enough corn on the ground but I saw deer at it during daylight hours.

justsomeguy
Thats really good advice. The timber company is clearing my property so it will be much easier to put in some good plots next year. If the property around mine has hunters putting out lots of corn will the deer just hang out around their corn or will they still move through my lease? I only have 100 acres and have hunters on all sides.
Reply

BuckXV
I agree with Bird Hunter. We have a club feeder that I maintain on our hunting lease. I set the feeder to feed for 4 seconds at 6:15 AM no PM feeding time. The feeder is 150 yds. away from the stand and not visible from the deer stand. Many deer are seen heading to the feeder early in the morning. Gravity feeders and members feeders that feed AM and PM that dump pounds of corn , all night time activity.
Reply

the almighty stuck
Yall have brought up some great points. while it maybe late in the season, next year should be a whole lot better with some ideas kicked up from this forum!! Thanks & Good Luck
Reply

jacomo
I strongly believe that no strategy of feeding corn at certain times in certain quantities will change a deer's movement or feeding habits. Once a deer is pressured into nocturnal habits, it will remain in that pattern until one of two things happen:

1: We have an extremely hard and extended freeze that kills, covers up all natural feed e.g. acorns, natural grasses...

If you want to see/kill deer on over-pressured land, do some very calculated scouting and hunt on trails that lead to bedding areas. Get on stand hours before sunrise and hope to catch them on their way back to their bed or during their mid day bathroom break.

I'd be willing to bet that no one on this site has a story of killing a trophy buck late season under a feeder in LA. However, I bet everyone has nighttime pics of trophy bucks under feeders. Coincidence? Not likely.
Reply

I truly feel this is the biggest reason why hunters have issues killing trophy bucks. If you are feeding the deer a large amount and you are having to replenish your corn, you are constantly leaving your scent in and around the area. The browse that is in the woods early on in the season does hender your chances of seeing deer in corn excpet at night. With the point I made earlier about the amount of corn that I was allowing to come out of my feeder was a little more than a couple of hands full so it was not abundant like most people have set. I never came close to this feeder if the wind was not right for the stnad. It is not Texas but late in the season if the does are eating at the feeder a trophy can be right behind them.
Reply 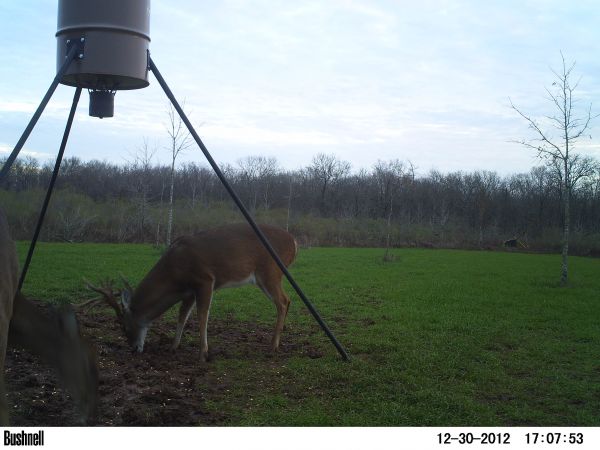 Here is a pic of a trophy deer under the feeder in the day light late in the season. It just so happened I wasn't there to shot him!!

We feed 3-4000 lbs of corn a year and see plenty of big bucks under our feeders. The feeder goes off twice a day at 10 secs.

We put up the 4 wheelers and only hunt with electric carts. Deer sightings went up 50%. Now when one of the neighbors start up there ATV'S, we watch the deer leave our plots as they know what is coming.
Reply