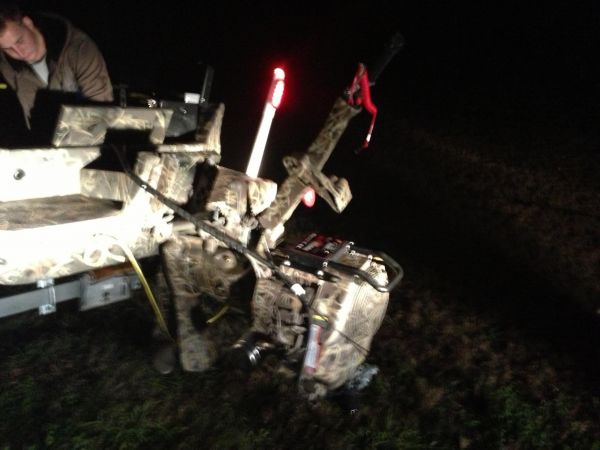 Wow some pics of a new mud buddy with a bracket failure.
Reply

Coot
Wow, What happened? Is that the new Sport V? Did that happend while trailering the boat? Who did you order your motor from?
Reply

'Figured I better post this before competitors got the photos and make a big deal out of it on their forums. We expect some motor issues and are on top of it.

We sent Southern Marine in LA one of our early show motors and agreed to give it to a customer waiting for a motor and subsequently it had a mount failure.

They had it at a show two weeks ago. They were given mounting instructions, however after reviewing the photos and getting the part returned, they did not position the mount on the boat transom, rather raised it off the boat an inch or two for some reason. It was set up for failure and photos show the mount break above the transom.

There was no support and the mount failed after being towed back and forth to the show and then on the customer boat. We have not seen the failure on other motors tested and run this hunting season, however all our motors here in Utah and Arkansas had the mounts sitting on the top of the transom, not suspended above the transom.

I sent the parts out for x-ray and there was a little typical porosity in the casting, but nothing unusual. We did a pull test on other mounts and they rated at 4000 pounds each before they would crack, 8000 total for two sides. The hardness was right and we saw little reason for failure other than a mounting issue - the motor was not supported at all.

However, we realize some customers might make the same mistake and are including mounting instructions with the motor with photos. And we added a reinforcement plate to the mount on motors this week that increased the yoke strength from 4000 to 5500 pounds.

We are sending the customer a new motor and apologized for the inconvenience. And since he got an earlier model built months ago, we are upgrading it to the latest with other improvements to skeg, mount and handle assembly.'
Reply

Gaspard Fishing Boat Rental
still should not have broke just an an inch abouve mounting lots of people do this with outboards without problems. didnt mercury make this frame? seems they should have known better.
Reply

Coot
I have faith that MB will work out all of the kinks. Can't wait for one of my hunting buddies to get his Sport V so I can run it. I hope to upgrade to the sport v next year, but I wanted to wait a year or two to let MB work out any kinks or flaws that they may run into. I know MB will stand behind their products.
Reply

JIMMY W
They never have!!!
Reply

Coot
That's your opionion Jimmy which you are entitled to. I don't care to get into a Ford vs Chevy debate with you on this site. The customer service I have recieved from MB and their dealers has always been top notch. Apparently Low Bird may not be the owner of this motor and stole the pics from somewhere else to stir the pot.
Reply

Chris Holmes , Louisiana Sportsman Field Reporter
I have owned two Mud Buddy motors and still own one. I have absolutely no complaints. All manufacturers have problems, especially with new designs. Tweaks and changes are always being made. Do you know of any car, truck, outboard, etc that is exactly the same as when it was introduced?

I'm no engineer, but the explanation of the above transom mounting position makes logical sense to me.

I believe Mud Buddy has made quality mud motor products for many years, along with many other companies. They too will tweak and change as experience dictates. The new model looks very interesting and will likely be a great additional choice for anyone in the market for this type of motor.
Reply 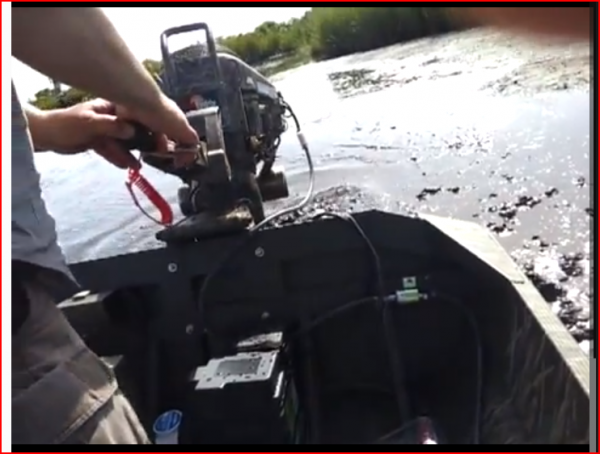 For those who are believing what MB is saying about the dealer improperly mounting the motor on the transom, here is a pic of when the owner of MB himself was 'testing' the motor here in South LA. Notice how the motor is mounted. Now I am not partial one way or the other, but the fact that MB is trying to place the blame elsewhere is nonsense. Sure, they all have problems, but stand behind your product and own up to any issues that may come about. Sorry MB, try again...
Reply

CJB 3030
It is obviously not the same boat; however, it is a SportV motor being run by the owner of MB (search YouTube for the video of it and you can see for yourself). The sole purpose of that picture was to point out how the motor was mounted. MB claimed that the reason the mount broke, as shown in the first photo on this thread, was due to the way it was mounted a little off the transom. Well I'm not saying I'm right or wrong either way, but it sure looks to me like the one in the photo I posted is mounted up off the transom also, yet the dealer mounted the broken one wrong? Who knows.....
Reply

myself
I bet mud buddy would love for this picture to fade away. Of course they have lead some people to believe it is because the dealer put it on wrong. From what I read the dealer knows how to mount mud motors on boats. Maybe it is another copy cat that didn't pan out for mud buddy.

Maybe Obama and Biden should ban this motor, since it could fall off in front of a school bus full of kids and cause the buss to wreck and kill most of the kids.
Reply

BRduckhunter
Ive owned a PDR, MB, and GTR and currently still have my gator-tail. I will say in my experience that hands down Mud Buddy was the best in EVERY way. The only reason Im running a GTR is because I have to have reverse. Ive never had issues with MB customer service but have had issues with both PD and GT. GT has messed up orders for me twice and the lady who handles online orders doesnt have a clue what the heck shes doing. My PDR went through 2 lower units and was a pain in the butt. My GTR sits up way to dang high and has cost me on some scouting trips. My MB also got me through more mud, had a lower profile, and looks like alot more attention to detail was done. Theres a reason you always see MB getting hated on. I personally cant wait to see what the new MB is gonna do and am doing the same thing 'coot' is doing. To each their own but thats my personal experience.
Reply

Coot
Gotta love our free enterprise system in this country. As a consumer you can buy whatever product you want. There will always be 'haters' who like to bash a product. Who freaking cares what mud motor you run. Good comments BRduckhunter! I have owned a PD too, but not a GT. Love my MB and the customer service. I need and want reverse. Even if it is a flaw on MB's part they will get it worked out. I'm glad we have choices. You have 4 big surface drive companies in this market (PD, GT, MB and Go Devil) and now 3 out of 4 of them offer reverse.
Personally I plan to get the new Sport V with a 40 inch tail for digging deep in the mud. Nothing wrong with GT's reverse, but I have several buddies running them. GT has the shortest tail of them all and don't offer longer tails and they simple cannot go through the mud from a dead stop like my MB can.
Reply

Six Foot
Just an FYI for those who may not know, GT actually does offer two outdrives: the standard 27', as well as a 32' outdrive. It is my understanding that MB standard outdrive is 27' also, with options like the 'LA Special' motor that comes with a 32' outdrive. The PD has the shortest outdrive, which makes it the easiest to drive, more like the feel of an outboard..
Reply

backwoodssince8
i have a mudbuddy and my hunting partner just boughht one also. Both 36hp. I love them. Im looking at sport v for my next one. I like all 4 surface drives. I just rather mudbuddy because the design looks cleaner. As someone just said it looks like more attention to detail was taken. Again i like all of them. I think they are all pretty cool.
Reply

BlueShamu
From what I have read about the 'Mudbuddy Family of Products,' they seem to be content with letting the consumer be the guinea pig with their product lines instead of going out and doing some 'real' product testing themselves.

If this is 'Revision 6' of this motor, sounds like they already worked out six other kinks on their own. They should have given out a few demo rigs to people (guides & such) that would get plenty of use from them to see how well they endure in different environments before giving them to the consumer. I think they are behind the eight ball on delivery and are going to start putting motors out there. The people that buy them will be the new test subjects.

Their videos on Youtube do not offer any insight into their durability. My MinnKota RipTide can do what they are doing...backing up in tall grass? backing up in soupy mud? bang the prop against some rocks? They should have used oyster beds for that test.

If and when these motors finally do get on the back of boats...and stay there...and they prove themselves to have 'revolutionized' the mud motor industry. I may look into one. But, until then, I'll stick with my ProDrive.
Reply