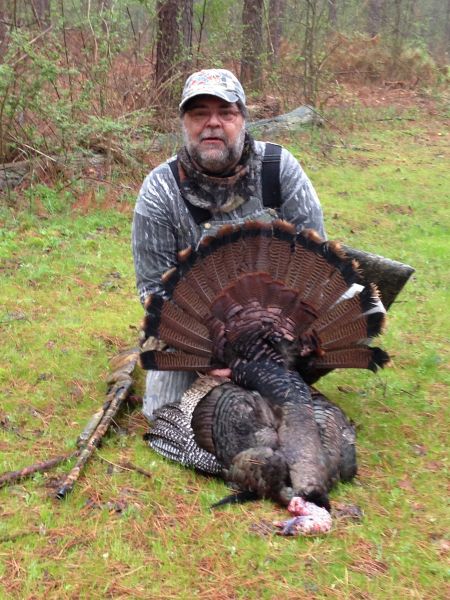 A friend of mine Johnny asked me if I wanted to go turkey hunting on his deer lease in Brookhaven ,Ms. He has never killed a turkey before and only made 2 hunts,so I said yes and I'll come call for you.

We got to camp about 4pm Friday evening and headed to the woods. Sat on a food plot till just about dark never saw anything. Got up to leave and owl hooted and we got a gobble about 400 yds away, waited about a minute and hooted again. He gobbled again.

Got up Saturday morning and went to where we heard him gobble the evening before.

At about 7 a.m. we owl hooted and he gobbled. We went down a road that went into another food plot when we got there he gobbled again. Now we were about 150 yds from him. I told Johnny let's set up here. We put out 3 decoys out- 2 hens and a jake. Got all set up and I started calling to him, he starts gobbling back we did this for an hour, he would not come in. I heard some hens early so I guess he was with the hens. I kept calling he kept gobbling and about 20 min latter here they come. 4 hens, 2 jakes and a gobbler. They came right into the decoys and I told Johnny to shoot, but he said I cannot see him. The turkey took a few more steps. I told Johnny to shoot again he said I cannot see him. The turkey must have heard us and he picked his head up like he was about to run I told Johnny I got him
BOOM! 1 dead turkey. 10in beard, 1 inch spurs, 18 lbs. 7:40 am.Took a few pictures and left.

I told Johnny lets go look for another one it's still early. Went to the other side of the lease.

Took the call out and started yelping and cutting and got a gobble about 300 yards out. Went down a road to another foor plot. I yelped and he gobbled. He was only 100yds away. I told Johnny to get ready. I looked across the food plot there was a creek and the turkey was on the other side. So I started calling to him. Well, come to find out it was 2 turkeys and they were fired up. Every time I would call they would gobble. Johnny could see them walking up and down the creek but would not cross. So I stared cutting and yelping hard ,they were gobblig their butts off.

Captain Gene Dugas-Rather Be Fishing Adventures
Turkeys
I hunt esat of Brookhaven about 15 mi. Last weekend only heard two gobbles going back monday. Just wondering if we are in same general area. looks like you heard several and cooperative birds
Reply