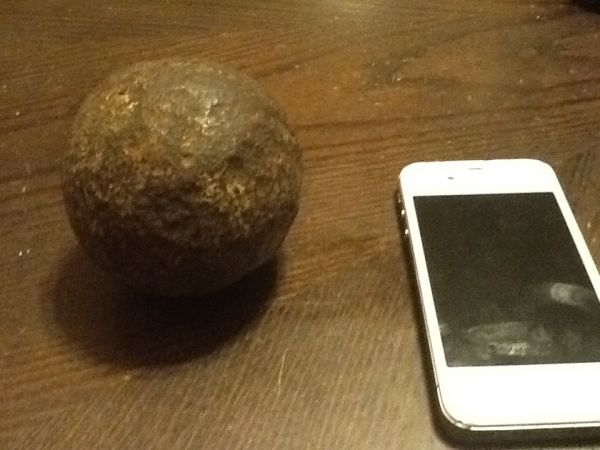 This cannon ball was recovered along bayou Lafourche south Of Donalsonville . I'm thinking civil war??? I do know that Napolean Bonaparte faught his way up bayou Lafourche. Any body know about cannon Balls?and war artifacts from this area? I do have another one as well its about double the size of this one from same area . Also in better condition . Also are they common from this area I have some friends that have some the found at there lease in Vicksburg Miss
Reply

Admiral Rabbit
'The Night They Tore Old Dixie Down'
...you may have some marking on it that will show up w/a side-light using just a quality magnifing glass...I was told if it's a 16 pounder and had 'J A' stamped on it that it stood for 'Jackson Armory' ...it would be Rebel...cheers

...always get three or four prices (from people not in the same town) before you sell...they getting scarce...DO NOT SAW,TORCH OR DROP IT SOME HAVE BEEN KNOWN TO EXPLODE...
Reply

fishhfiles
3 pounder
Put it on a scale , looks to be a 3 pounder , I found the same size ball in Mereaux on the river batcher with a metal detector about 20 years ago and still have the ball, what I learned about the 3 pounder was that it was used on Naval ships and could have been fired from one of Jean Lafitte's cannons at the War of 1812 , I would think Bayou Lafource would be another spot Lafitte would have been around -------I was offered a $100 for it once and decided to just keep it -------------Rabbit , I still have the same White metal detector that you are trying to sell on the classifieds and found the ball I got with it
Reply

Bloodydeck82
Meatel detecting
Looking for someone to get into trusere hunting with lol.
Iv got some great spots let me know thanks for the info as well
Reply

slickhead
Cool Find
I will give you $20 for it!
Reply