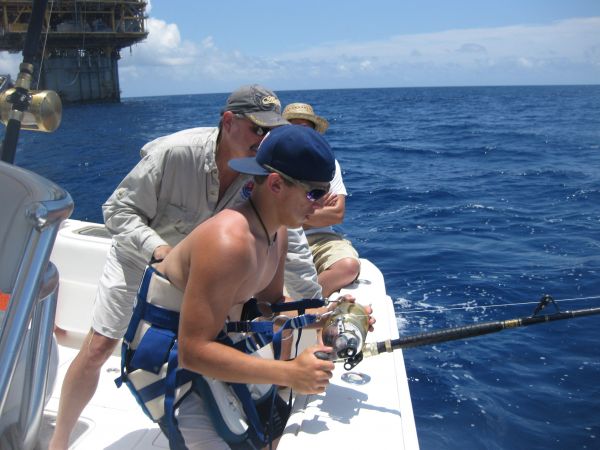 Had Todd Dempsey and gang on the Deja Vu this past Saturday for Josh and we couldn't have asked for better weather. Left out early and made a direct line for the snapper hole. Took a minute to get things going but we made pretty quick work out of a nice limit of red snapper before the boat show arrived. With that out of the way, we headed south to see what the gulf had to offer. Stopped at some grass patches and put some good Mahi on ice. We then hit a beautiful rip and pulled it for several hours with nothing to show for our time. The line held lots of flyers and other bait but we just couldn't find anything wanting to chew. With lines up we headed south with a few live baits. First baits out and immediately doubled up. One shark and a dolphin that I somehow managed to lose at the boat. Baits back out and another double knock down. One swing and a miss and 1 small dolphin. Baits back out. Brad and I both saw a fish bust on the bait and we are immediately hooked up. I saw about a 50lber blow up but Brad said that he thought he saw a 'pretty good' fish hit. After about an hour and half fight, Cody and his Father Tracy Brouillard bring up a true slob. The 50lber I thought I saw turned into an 183lb Stud! We managed a few more nice Dolphin before heading for home. We have this Sunday (Father's Day) open. Give us a call!