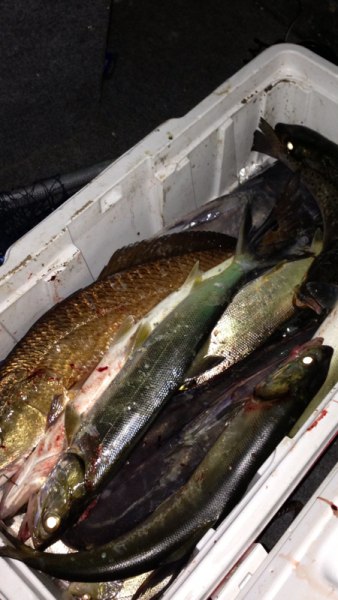 I have heard from a lot of people within the past two weeks that if I wanted to do some good local salt water fishing, that the Rigolets (just south of Slidell, between Lake Pontchartrain and Lake Borgne) is the place to be. I live in Walker, so the drive for me takes about an hour and 15 minutes to get to the landing I use. I have never done much saltwater fishing, but I thought I would give it a try. I went two days in a row (August 23-24), and it was terrible due to no tide and poor conditions. I was using live and shrimp on bottom, a DOA shrimp Carolina Rig, and an artificial cocahoe minnow. Total fish in the boat for those two days: four nice sail cats, one 4 foot gar, one nice flounder, three spec trout, and two black drum. In an attempt to redeem myself, I went yesterday (August 29) after work on an afternoon trip. I launched at around 4:30 PM and immediately headed east towards the rail road tracks. Conditions were very good. I stopped at a spot someone told me about in the marshes on the south side of the river near the tracks. Caught three sail cats all over 5 pounds each and one drum all off of bottom fishing with shrimp. I wanted to try my luck at some reds or trout, so I rigged up a popping cork with a live shrimp on a 4/0 treble hook. I threw to the point I was anchored near and within ten seconds I had hooked on a nice redfish (the one in the picture). Measured 24 inches. I caught two barely-legal spec trout the same way, and decided to move to the railroad bridge near Lake Borgne. I tied off to one of the pillars and came across a HUGE school of Lady Fish. Put three in the boat and fished on bottom for the remainder of the day, but only succeed in catching sting rays and hard-head catfish. All-in-all, it was a good 3 hours of fishing. I am going back tomorrow (August 31) early to do an all day trip. I will post another report of how the trip goes. Sorry for writing this novel for whoever is reading, but I had two hours to kill before my next class, so I wanted to share my experience.

Things to remember if you are going to try out The Rigolets: get out there early in the morning on a day that there will be a good falling tide (VERY IMPORTANT!). Look for current flowing around a point, and fish all around it. Live shrimp are doing the trick out here, and I personally like using a 4/0 treble hook, but if you think that is too big, a 6/0 would do nicely too. Good luck, and be safe!
Reply