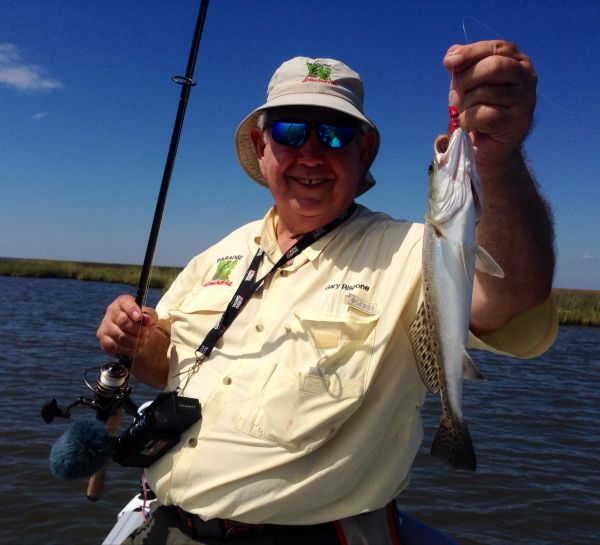 Got an invite from Capt. Elton to jump onboard his Bluewave and film Paradise Louisiana with Gary Rispone. Not having a charter today made for an easy decision. Since the trout have made their transition into the lakes and surrounding marsh we didn't even entertain soaking crabs for red fish. We figured we pick some of them up while fishing for trout. Sure enough we did. The first stop had us throwing corks and picking up a few fish here and there. With the bite not fast enough we made a few moves and found an area holding trout, reds, and bass. Gary was amazed at how you could throw and not know if you were going to catch a trout, red, or a bass. When the bite slowed down we took off and hit a point I usually find trout as they are moving north. Sure enough they were there and hungry. They were all keepers which was a bonus. Once that bite slowed we made another short move to another point that had the tide rolling by it and found the trout stacked up. Most were small but sure was fun. Gary kept saying he wanted to go catch more bass and reds but struggled to stop casting since it was on every cast. We left the biting trout and headed north into the marsh. We had no problem finding Gary more bass and reds. He was able to site fish a few too which made for a good time. You don't have to settle for a box of reds because the trout are in the lakes and surrounding marsh. You're going to catch some small trout but there is plenty of action out there to put together a nice box of trout and then go find some reds and bass. A variety of baits caught the fish as they weren't picky. Matrix Shad and the Cocodrie Cocahoe along with the Endura shrimp all had their moments of glory today.

Capt Elton, CATCHDAT
Thanks for posting the report capt! That was a good trip for and a fun group to fish with! The good thing is we caught trout everywhere, from all over the lakes to very deep in the marsh!

Will be picking up you, Capt Marty and Leonard shortly to see if we can do it again today!

GMC MAN
nice catch their fellows.. hoping to get in on the action this weekend as well.
Reply

Doe Chaser
what area are you catching bass? Lake Decade side or further west?
Reply

Capt. Marty LaCoste - Absolute Fishing Charters
Great catch yesterday also guys, wish I could of made it but had other commitments. It's all good though, as today's trip was just as good if not better.
Reply