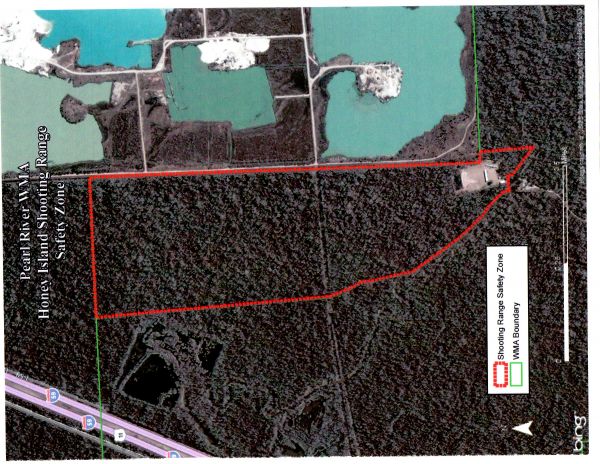 In an outrageous demonstration of disregard for the established needs and concerns of hunters of public lands in Louisiana the Secretary of Louisiana Department of Wildlife and Fisheries, without any public knowledge or input, has conspicuously closed down 206 prime hunting acres that were accessible by road in the Pearl River WMA. While 206 acres might not seem like much land when the PRWMA has 35,728 acres in total, if one considers the road system is the only way for many hunters to access the WMA, and that since hurricane Katrina, where most of the tall tree canopy was lost, the undergrowth prevents walking accessibility to much of this WMA, this loss of hunting area is huge.

The stated reasoning of the Secretary of LDWF for closing this area adjacent to the Honey Island Shooting Range was that something had to be done immediately to protect those shooting at the range from getting shot by careless hunters. Keep in mind that there was already a safety zone that proved to be more than enough, and in all the 20 plus years this 206 acres has been open to hunters not one single person using the shooting range has ever been shot by a hunter, nor have there even been any close calls.

Which begs the question, why, after over 20 years of safe range operating without this large “Honey Island Shooting Range Safety Zone”, would this issue be of such an urgent nature that the Secretary of LDWF would bypass all established administrative procedures, procedures that hunter’s must follow to get anything changed, and close off 206 valuable public hunting acres to hunters?

Calling even more suspicion to this apparent knee jerk reaction to a non-existent “safety” concern is the fact that when anyone with experience or knowledge of this WMA's shooting range looks at the map which indicates the recently closed lands it’s preposterously absurd to conclude that this ill-conceived new reduction of productive hunting land offers any more protection to shooters at the range than what previously existed.

In order for it to be tenuously plausible for a careless hunter to mistakenly shoot someone using the shooting range from this newly created “Honey Island Shooting Range Safety Zone” the hunter would have to be firing some sort of lazar guided bullet, which only exist is science fiction novels, that goes around trees and over 30 foot tall, or through 30 foot thick, levees, and then drops immediately in order to strike someone shooting at the range. Perhaps this explains why there has never been a case of a careless hunter shooting anyone that was using the range.

Is this the decision of an out of touch Administrator, or could this be retaliation for over a hundred hunters complaining to the LDWF about the Honey Island Shooting Range disturbing their hunting experience by shooting extremely loud short barrel AR’s, and an average of 250 vehicles traveling to and from the range on over 40% of the only roads that people can hunt off of starting at before daylight and going on all day until past sunset? Is this what happens when hunters complain about the range?

Does it seem obvious that both the decision to close 206 acres of prime public hunting land due to some contrived “safety” issue, and the timing of that decision (within weeks of receiving a petition from over 100 hunters complaining about the disturbance created by the Honey Island Shooting Range) has cast an enormous aura of suspicion upon the entire LDWF Administration?

If the Secretary and LDWF were genuinely convinced that those using the range were in such imminent danger from careless hunters in the woods with high powered rifles, and had no other agenda, especially considering the people at the range were behind a 30 foot tall, 30 foot wide berm, perhaps he would have better served both parties by closing the range for a total of 18 full days and 7 half days a year during rifle hunting seasons on the PRWMA.

Now ask yourself why would the LDWF Secretary have not made the decision to close the range during rifle deer hunting seasons, a decision that would have solved both problems at the same time by eliminating the range’s disruption of deer hunters, and protected those using the range?

Whatever your answer is the fact remains that the Secretary’s atrocious decision to close of 206 acres of premium public hunting land apparently reflects his overwhelming desire to not inconvenience those using the range while at the same time displays his discernible indifference to the established needs and concerns of hunters.

Shame on you Secretary Robert Barham, for you and your Administration have perpetrated an injustice upon all those that hunt public lands in Louisiana, and have demonstrated that you are no friend of Louisiana hunters on the PRWMA.
Reply

Water
Shootin Range
Dude have you ever shot at that range? The 'range masters' run it like a bunch of Nazis. Saftey is one thing but what they do is another. One guy started yelling in my face about touchin my ammo while the line was safe. I was 15 feet away from my gun and digging in my bag for a bottle of water. He was still giving me bad looks so every time I moved I'd say,'Going to the trash can boss, throwing trash away boss, walking back to the gun line boss.' Seriously though, it wouldn't surprise me if they were just being jerks.
Reply

Iceman
Water
Water, I know the guy you're talking about and that range master isn't out there anymore. They also no longer let him teach hunter's safety courses. I took my son to the course 8 or so years ago and he was the instructor. He started the class by screaming at everyone right off the bat. I got up and walked away, because if I had stayed I would have got up and knocked his teeth out. I really couldn't believe that other men were staying to have some stranger scream at them and their kids like that. The range masters nowadays and pretty easy going, but still safety conscious.
Reply

stancel
Why?
If I had to take a guess why this was done, I would put writing citations at the top of my list. The WMA hunting/fishing regulations are jam packed with ridiculous and unnecessary rules, all so game wardens can write tickets. There are so many obscure rules on the books that three game wardens will give you three different answers to the same question. 25 years ago when I hunted out there you would see a game warden once in a blue moon driving plain old brown (or was it green) truck. Now they are all in shiny new dodge 4x4's gunned up with weapons more suitable for a war zone. Those pretty toys cost money, and hunters get to foot the bill.

But hey, this is government we are talking about. Maybe one of the secretary's friends wanted a section to hunt all to himself. Who knows why. And if we knew, the answer would probably just piss us off more. One thing we know for certain is that the reason he gave isn't the real reason. He is a government employee and his mouth was moving, and you know what that means.
Reply

Louisiana Duck Hunter
Safety First
I'm glad I strictly bow hunt. Whether you like LDWF Enforcement Agents or not they have a job to do. This includes the Secretary of LDWF. If you or anyone else complains to LDWF about noisy AR rifles or anything else that leads them to believe that there are too many people at the shooting range during open hunting season then it is their duty to consider the safety of the public. I've never even been there but just reading this thread and looking at the map leads me to believe that there most definitely needs to be a safety zone behind the shooting range. Why would anyone feel safe right behind a shooting range and why would LDWF allow people to hunt right behind the shooting range. Like it or not, the WMA is for everyone and that includes gun enthusiasts. Apparently you like to hunt in this affected area. I love to hunt just like and maybe more than anyone but when your judgment is clouded by selfishness, you really should take a step back and reassess your priorities. Hunting is supposed to be fun!
Reply

bougechitto1
SHOOTING RANGE
IS BOW HUNTING ALLOWED IN THAT AREA? IF THE REASON FOR CLOSING THOSE 206 ACRES TO HUNTING IS SAFETY TO THE RANGE, WHY THE SECRETARY IS NOT CONCERNED ABOUT SAFETY ON THE 1-59 THAT RUNS THRU THE MANAGEMENT AREA? HUNTING IS ALLOWED
100 FT FROM THE CENTER OF THE ROADWAY? I THINK THAT SOME INSIDERS ARE KEEPING THE AREA TO THEMSELVES. LOOK ON THE SATTELITE PICTURE AND YOU WILL SEE ROAD ACCESS FROM THE EAST SIDE THRU PRIVATE PROPERTY.
Reply

hogman51
Reason behind closure
From what I have heard, they closed down the area do to reports people were giving that hunted that area. People were reporting having seen or heard bullets strike trees,and a few people were even claiming that bullets have strike trees they had their climbers on. It was strictly due to safety reason.
Reply