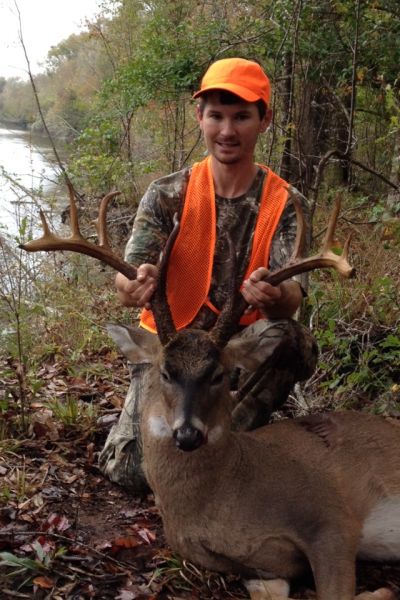 Saturday November 3, 2013
It was one of those days when you walk outside and say it's to hot to be hunting. The temperature was about 70 that morning but I was up and going regardless. I was supposed to meet up with a group of friends before we went our seperate ways but only 2 showed up. The rest said the same as I was thinking 'it's to hot'. It started with a 30 minute walk to my stand in the dark arriving at about 5:45am. By this time I was already sweating and thinking this should have been the morning to sleep in being I was soaked in sweat. I got in the stand, sprayed my scent away spray on, and waited for daylight.

Daylight broke and the wind picked up blowing straight from the east gusting at time then slacking off dead silent at others. About 6:30 I caught a glimps of white out the im corner of my eye to the right but never could make it out. It seemed to be an antlered deer but was not positive. So now with my mind on the fact there was one over that direction, my attention was focused to my right more often than it should have been. At 7:00 I was scanning the area again looking to the right but this time when I came back to the left, there he was walking from right to left. All I could see is it had horns and that was good enough being my best kill before this was a spike. I had two small windows for a shot and he was walking through one as soon as I saw him. He had his head down and was walking at a gum fairly good pace but with my lack of patients, my gun was up, he was in the sights and the .270 went off.

After the shot he took off out of sight. I heard he run a good way before it was silent. I was super nervous about the whole situation because I didn't take my time like I should and could have so I sat in the stand for 15 minutes just in case it was a bad shot. The 15 minutes seemed like it could have been 15 hours before I headed down the stand to the he was when I shot. As soon as I got there I saw chunks of what seemed to be liver and blood. I started walking in the same direction he ran off and began seeing massive amounts blood. I followed the blood trail about 100 yards and I was beginning to think the blood trail was going to run out and I was going to lost my first rack deer. I continued to follow the blood for a total of 150 yards then I saw a large patch of white hanging from some vines which is when the excitement began. I quickly ran over, flipped him around, and started jumping! I started counting over and over making sure it was 11 points followed by admiring the spread. Now with my adrillian rushing,I wanted to get him out but that only lasted 20 feet or so.

Now that I found him and the initial elevated excitement was at the just excited stage, I started calling for help. My friends who were supposed to go hunting but decided it was to hot were the perfect friends to help me drag. They asked how big and how many points but I couldn't tell them the truth until I saw them. When I met up with them they asked what it was and I said with excitement 'he's got six points .........on one side'. The excitement boiled over as I showed them the pictures. It was a quick celebration followed by a long drag.

Goes to show you never know what will walk out and you can't kill them in you bed.
Reply

pollyp07
Congratulations man! Not very often you see a deer that wide. Just goes to show you can't kill them if you aren't hunting!
Reply

kingcobia1
A wide Buck , did I say a fine Buck as well. Congrat's
Reply

lormanbogg
I see your post has North Shore. Where about did you kill that fine buck?
Reply

hammondmedic
Nice Buck. I hope it was the 23rd and not the third of Nov it was still bow season.
Reply