Banded with a tracking device 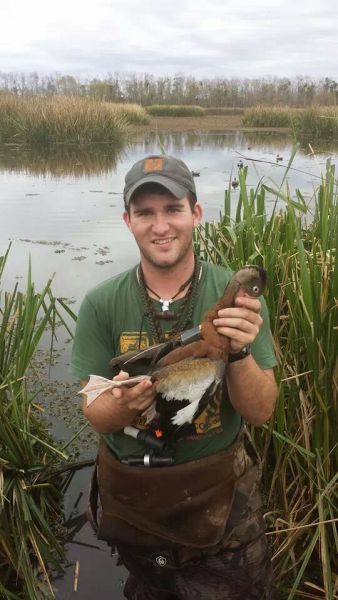 Killed this guy 12/22/2013. A early christmas present. Any infoon what to do with the gps tracker?
I've heard that they will just show up at my house.
Reply

Wishin I Was Fishin
Edward Snowden?
I believe you are right, they'll come to you LOL! You should expect a call from the NSA shortly. Did you notice the tiny camera on it? I heard they are training ducks as drones - a little less inconspicuous than a motorized version.

That is some pretty habitat you're hunting - how has the season been?

Lherpin
Thanks
It is beautiful, but the ducks are very scarce. That is really a camera? Looked like one but wasnt sure.
Reply

Wishin I Was Fishin
Camera
You know, I was joking about the camera, but you never know. Wouldn't that be cool.
Reply

Lreynolds
LDWF deployed 8 transmitters
Bruce Davis, Research Ecologist with LDWF at Rockefeller Refuge captured, banded, radio-marked, and released 8 BBWD in SW Louisiana last summer. I've forwarded him the link to this thread, and he can be contacted at Bdavis@wlf.la.gov or if you will contact me, I will provide you with his phone numbers.

Of the 8 birds released, none of the radios are functioning, and we have not received location data for a while now. So nobody will be coming to your house. Consequently, their fates are unknown, and there has been reason to suspect that the attachment method was negatively affecting the birds and possibly causing mortality. It would be incredibly valuable for Bruce to see the bird, and gather as much information as he can from you and the bird's condition.

We would really appreciate your contacting Bruce and maintaining the bird in it's current condition if you can. Bruce will gladly provide another radio if you want to mount the bird.

Nice prize from a day afield!! And thanks for whatever assistance you are willing to provide.

Lherpin
Thank you so much!
Thanks Mr. Larry. I have contacted Mr. Bruce and he is headed over to my house right now.
Reply

Lreynolds
Excellent!
Thank you! We really appreciate your interest and assistance!
Reply

Coot
Nice!
Great work by the sportsmen and the biologists.... That's a trophy for sure.
Reply

beauxnarreaux
update
I'm not even a duck hunter but I'd be interested in what the biologist learned from this duck. Would someone be willing to share with the rest of us what kind of good information they get from these studies. Educating the public also makes it more likely others will cooperate if they are fortunate enough to get one of these too.
Reply

Duck enticer
Pretty neat
That is definitely a rare kill. Only 8 of them fitted with those trackers. I would have it mounted with the tracker even though it looks gaudy........ My wife would find a way for a mount like that to fall off of the wall.
Reply

GatoR_TraX
Tracking device
Thats an awesome kill man! Ive heard of them but thats the first ive actually every seen. I was talking to a biologist a few years back and he said there was a tracking device on a mallard. The mallarn flew from arkansas to venice every day until it was killed. The mallard reached a top speed of 105 MPH while flying in the jet stream!!! Pretty awesome information those devices can gather. Awesome kill, please post any information you get from it.
Reply 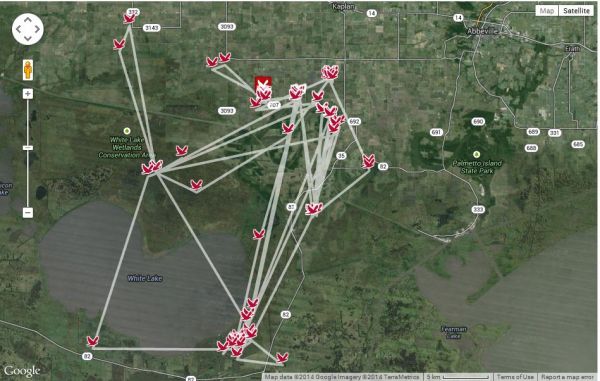 The study that is going on for Black-Bellied Whistling Ducks is what we call a 'pilot' study. Pilot studies provide information for larger, more comprehensive studies. I've included some information here that I hope you will find informative:

Black-bellied Whistling Ducks (BBWDs) have recently expanded their range to include southern Louisiana. A recent species account shows BBWDs breeding in south Louisiana, but does not report wintering BBWDs in south Louisiana. However, numerous large flocks of BBWDs are seen in late winter in coastal Louisiana, and BBWDs have been seen regularly in Gulf Coast habitats and associated agricultural areas during summer. The extent and chronology of migration occurring in BBWDs present in southern Louisiana is unknown. Sport hunters in Louisiana harvest BBWDs as a part of an aggregate daily bag limit during the regular duck season; hunter harvest in Louisiana appears to have increased dramatically since 2000, but data for accurate estimates of hunter harvest are currently limited.

Winter banding efforts have demonstrated use of wintering sites in south Louisiana by BBWDs. Winter flocks in Louisiana with >10000 individuals have been observed. At least some breeding is occurring in BBWDs present in south Louisiana during summer; observations of broods in this area are common. BBWDs were previously described as migratory in the former northern periphery of their range in Texas. The quantity or proportion of observed BBWDs that are year-round residents in Louisiana, the proportion that are breeding elsewhere and wintering in Louisiana, and the proportion that are breeding in Louisiana and wintering elsewhere are unknown. The composition of migratory to non-migratory individuals may affect management for BBWDs in south Louisiana. Estimates of emigration and immigration rates and descriptions of the timing of these events do not currently exist.

This study was initiated to test methodologies that could be used to learn more about these and other life-history characteristics of this species. We are dealing with untested waters here. This type of transmitter (backpack mounted) has never been used on this species before. Further, this type of technology (GPS locator that transmits data through a cel-phone network)is relatively new. Thus, we initiated a 'pilot' study to learn about the transmitters, their attachment affects, and to experiment with the new technology.

The particular transmitter recovered by Mr. Herpin was placed on a female BBWD in April of 2013 near Forked Island, Louisiana. It successfully transmitted location data through July 2013, but failed to transmit after that. Recovery of this transmitter is of monumental importance to the project. It will allow us to return the unit to the manufacturer who may be able to recover any stored data from the unit and will be able to improve its design and reliability. It allowed us to eveluate the condition of the bird and will enable me to make improvements in my attachment technique.

For everyone's information, I am attaching a map of the movement data we got from this bird for the three months that the transmitter was working.

I sincerely want to thank Mr. Herpin for his cooperation on this project. The information we gain here will be very valuable. If anyone else comes across a similar transmitter, they can contact me directly at the address below.

Lreynolds
Thanks for the update, Bruce.
and we really appreciate the assistance!
Reply