vineytree
Hello fellow sportsman I am in need of a new shotgun for ducks I have narrowed it down to Benelli or Browning and want be swayed from the two. I know the Benelli SBE2 is proven but has anyone hunted with the new A5 because I have my dads 1953 version and used it as a kid to hunt with no problems and if the SBE is not hands down way better I would like to give the new A5 a chance. All opinions will be appreciated but please don't comment on any other brands as it will be one of the two I have listed that will be purchased. Thanks
Reply

mudboat100
I own both SBEII and A5 ... When loading the boat it's an easy decision, A5!!!
My SBEII likes only Hevi Metal shells (jams on most others) whereas my A5 shoots anything, is faster, feels better and patterns better.
I picked the blue and wood 26' version because of nostalgic reasons, beautiful gun! Go get it at Puglias. ... Anthony has them in stick and I like supporting the mom and pop places even though it costs $20-30 more ... Geaux get ya one!
Reply

JIMMY W
The new A5 is a sweet gun!
Reply

push_pole_prov
Something is wrong with your SBE 11. Why don't you let me take it off your hands for you?
Reply

LOUISIANA MARSH GUIDE SERVICE
The new A-5 is a great looking gun. This season I have had 5 customers show up with them. Four of the five jammed and turned out to be very expensive single shots! Don't know what the problem was. Other than that they look good.
Reply

cblood9
I have the SBE I SBE II and just bought the Super Vinci, I LOVE the super Vinci it's an absolute BEAST. I have never hunted with one of the new A5's but I have witnessed the single shot phenomenon you speak of, personally I would recommend going in the store and through each gun up as if you were shooting at a live bird with follow through and all and go with the one that is the most consistent and natural! Good luck you will be pleased with either of your options!
Reply

push_pole_prov
If it is left handed e-mail me where you want to meet up and i will get the cash.
Reply

I remember back in the 1990's and into the 2000's, The browning Gold was extremely popular. I was guiding a lot back then and I saw plently of Golds. It was the MOST unreliable autoloader I have ever seen in my thrity something years duckhunting. I owned two personally. I sent one back to Browning and waited nearly 9 months to get it back.
It's sad to hear that one of America's most historic firearm brands just can't catch up with the Italians. I hunt with a Benelli SBE1 and a Beretta Urika as of now. I would be shy of a Browning auto. Sad to hear the bad reports already.

I have a 1968 Belgium Model Lightweight-20 that shoots great, but that's another story alltogether.
Reply

mudboat100
but actually I have never had a jam in my new A5 ... 2nd year hunting with it and have shot over 5 cases of shells ... No issues at all ... I also shoot a Benelli M2 20 gauge and love it ... Nothing against Benelli, they have been more than accommodating however, I have seen 4-5 of the SBEII's with the same cycling issues, broken ejector springs (twice) ... I love the feel of the SBEII but the A5 feels better. Just my opinion.
Reply

JIMMY W
He hasn't seen any A5 jam either!!There is nine that I know of in my area and zero problems!!
Reply

Orian
Apparently both the Benelli and the Browning have problems. I say go with a Franchi Affinity.
Reply

beighc66
Franchi Affinity definitely best bargain for your dollar... nice gun.. I have a Beretta extreme 2 and a Browning silver DU edition and the affinity is the only one that leaves the safe. Franchi now makes an Intensity which shoots the 3.5

vineytree
Guys I appreciate the feedback I am going with the Benelli I have researched the web and found the new A5 has some issues also im sure browning will work out the kinks but I cant wait that long. I currently shoot the Franchii I 12 and it fits me great shoots awesome but unfortunately it is falling to pieces it has lost two bolt handles (70 dollars for a new one) the stock is getting loose and the pretty little emblem on the stock has fallen out ,but I will say this it has never jammed. Regardless of some opinions about other brands I will not purchase a gas operated shotgun. Thanks
Reply

Yakdaddy
should have gone with the Beretta A400. I shot all three, plus a couple more when deciding. Bought my A400 last year, nothing else compares IMO.
Reply

WilliamMig
Save your money, I shoot with any of those high priced guns with my Mossberg 935.
Reply

electricspec
Was doing research between these 2 for my bday present
Really was leaning to these.
What do y'all think
Bday is next week need to let wife know
Reply

Secret Formula
You're giving up on a gas operated shot gun without having shot the best….Remington!!! I shot an 100 for ever, extremely reliable. Wife shoots an 11-87 SuperMag as did I, extremely reliable. I'm now in season 2 shooting the VersaMax and purposely haven't cleaned it since I took it out the box in Sept. 2012 and am now into my third case of shells, absolutely no issues. Another member of our club got one for this season and the same results. Plus it's 'American', if you do have issued they are resolved quickly.
Reply

Gambleroutlaw
Remington 870 lol can't get away from it, bet u can't use that Benelli as a push pole and then kill ducks all day with it.. But really Benelli makes some great guns just way too rich for my blood and always fun outshooting the buddies that have them with my 870.
Reply

Secret Formula
The VersaMax has less felt recoil than any other 12 gauge shotgun on the market today. in 06' my wife wanted a magnum so I bought her an 11-87 SuperMag, at the time it was pro ported to be the lightest recoil gun on the market. I shot it several times and had to agree. I decided to retire my Mag10 and bought an 11-87 XCS and loved it. Then when the VersaMax came out saying it's felt recoil was 20% less than anything including their 11-87, and a half pound lighter I could hardly believe it. As it turned out Remington compt me a VersaMax last year, and it has been a delight to shoot. 2-3/4'' rounds are ridiculously light, lighter than a 20ga pump. This time in the season I generally shoot all 3-1/2' rounds, but early in the season I'd stage the magazine with a 3-1/2' round last for the follow up long shot. The gun cycles flawlessly. Definitely worth looking into
Reply

electricspec
Have had surgery on both shoulders so looking for the least amount of recoil as possible . especially with 3 1/2 shells
Thanks for all input
Reply 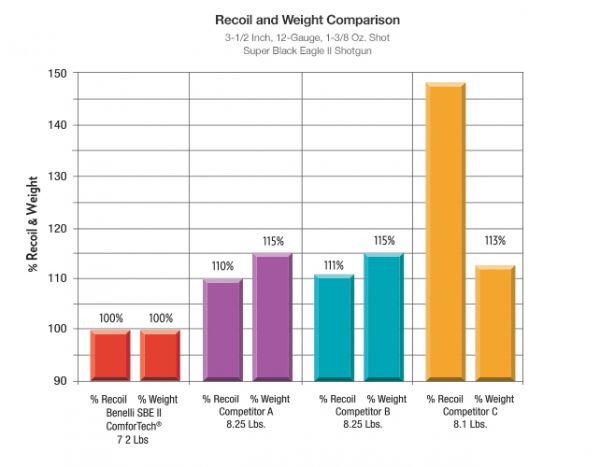 Secret Formula
Google 'least recoil shotgun' and read the article in Field and Stream from 2011. And as I had stated I'd hunted with a Mag 10, (same as SP-10), and the 11-87. The VersaMax is one sweet shooting gun and the folks at Field and Stream think so too
Reply

dchampton
Benellis dont jam .ever I ve never ever had one jam even low power.
Reply

JIMMY W
Benellis do jam a lot!I've had 2 that jammed at times and one that would misfire!Google Benelli Snap and you will see others having same problems!
Reply

miller_time
I purchased mine on the May tax free weekend this year, no cycling problems, no recoil whatsoever. It's a Remington, and just about everybody grew up shooting the 870. Up until the end of last season, I was still shooting my 870 SuperMag in a blind with the SBE2! guy and the Maxus! guy. I saw the SBE2 jam many times, even helped it out by putting some Remington Oil in it.
This quickly X’d out Benelli on my list for when I decided to pull the trigger on purchasing my first automatic shotgun. That, and the thing kicks like a mule. Only thing that ruled out the Maxus was that the A5 was coming out. Me being impatient and the fact that my buddy had problems with them pushing back the date on getting his gun after he ordered it, the A5 got ruled out.
And so my saga with Remington continues.
My buddy had jamming issues with his A-5, but I think it was due to not breaking in with high power shells, it only jammed with low power, shooting skeet the first few times. I think its fine now.
In my opinion, Benelli is just a fashion trend!
Reply

Orian
Half a century is a pretty long time to 'trend'.
Reply

Deltadude43
i have a sbe 2 and i love it no problems cycling the lightest loads.. i would buy 1 a thousand times over best shotgun on the market
Reply

push_pole_prov
Googled it and only thing I found is info on snap caps. What is benelli snap? If my 1100's that were passed down to me would have shot 3' and been left handed I would have never purchased another gun. However I am kinda glad they didn't because I love my SBE 2. I have sat in a blind with 870's, 11-87's, stoeger's, Winchester etc that have had problems. Most recently a buddy has an 11-87 that locks the action after firing. In order to get it to eject you have to loosen the mag cap a little and pull the bolt back and reload. It has been a single shot for him all year long. Gunsmith has seen it twice and cannot find the problem. Does anyone know how to fix this?
Reply

Marsh Mud
I've had mine for 2 years now and haven't had the first problem with it. I love the way the gun shoots and feels. I was raised on Browning and Remington so I am partial to them, but in my opinion all the guns mentioned are great and I looked at plus fired Beretta, Benelli, Remington and Browning. It came down to the Browning feeling the best.
Reply

Secret Formula
Latest issue of DU lists the VersaMax as the softest shooting autoloader on the market. So now it's the Field & Stream guys, the DU guys and the guys here that shoot it. This is some sweet shotgun
Reply