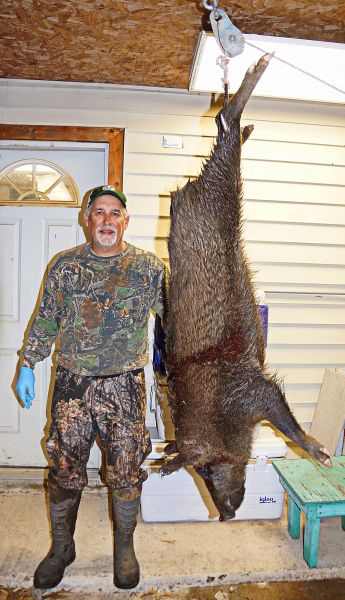 I shot this boar on Saturday evening on a private lease in St. Bernard. I was hunting together with my brother-in-law and we attempted to take a double on the two hogs that came out.

Technically, I guess it only counts for a half kill. The hogs were only a few feet apart and staggered a little. We did a count down and both went for head shots. Unfortunately he missed his, but also hit mine. To say the least, he dropped in his tracks with one shot to the head and one just behind the shoulder.
Reply

SouthsideHC
Never goes quite right
That's a good hog Congrats. Me and my bro-in-law have tried the a few times and they just never seem to stay still long enough.. We did it on 2 sows about a month ago, but I had a wingmaster and he had a Benelli. Good luck on future hunts and stay safe...
Reply