The Spawn is ON 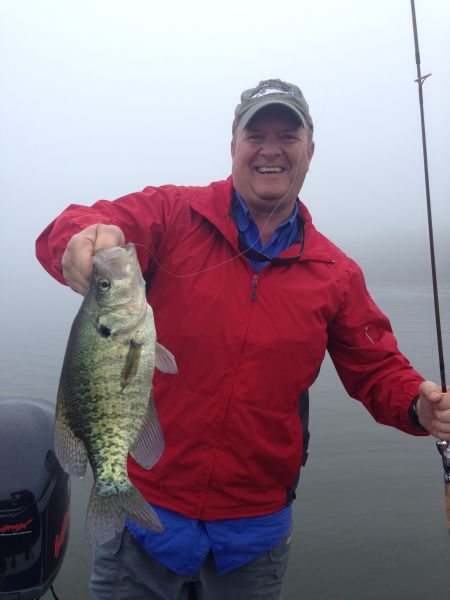 As of March 25, 2014 Toledo Bend’s lake level is 169.74. Generator 1 is shut down, but generator 2 is running 24 hrs. Mid lake water clarity is stained to clear, and the south portion of the lake is clear. Water temperatures on the main lake are in the upper 50s with the coves and pockets mid 60s with some coves reaching 70.

The bite has picked up considerably. We are catching before and after (typically 2-3 days) these lingering cold fronts. Its no secret that this time of year anglers should be in search of the warmest water possible. It’s also a must to find grass. Grass offers several things: it holds heat, filters water and provides cover all fish use during the spawning season. And depending on the water clarity fish will generally spawn in anywhere from 4 to 8'.

We are doing well casting road runners in 3-6' of water in areas that have grass and timber. Points, pockets, humps and flats that are protected from the North wind have good numbers of big crappie. The spawn is just beginning in the mid lake areas. One week ago we were catching only males with few females present. One week later we noticed the complete opposite. That means the males have made beds and the females are pairing up for the annual ritual, we call spawning.

The numbers are anywhere from the 30s to 50s per day. With great quality as far as size is concerned. The bite has been early morning from dusk till 10 then an afternoon bite picks up from 3 to dawn. And if you like to night fish there has been a decent bite at bridges as the mass of fish move through these bottlenecks heading to the spawning grounds. These areas are predominately being fished with shiners on tight lines in and around the bridge pilings.

After the full moon has now passed, several big females have moved up. There are many anglers sight fishing in areas that have water clarity that allows it. While sight fishing can be discouraging but tempting I find it easier to first locate a bed then back off and blind cast to the bed. Its much easier to catch a lunker if the fish cannot see you. I use a magnum watermelon seed lizard with a light weight or a wacky worm with a nail in the head during this time. A light florocarbon line is also a must. And you will also experience the old 'suck and blow' bite. This is a good thing though because if a bass does this then it can be caught. The trick is to down size the offering by either breaking the lizard or worm in half. Its doesn’t work every time, but this technique increases your chances of hooking up.

Good Luck on the water.
Reply

martys
thanks for info
I'll be heading up there Sunday till Wednesday. Fishing south end. Thanks for the pointers.
Reply