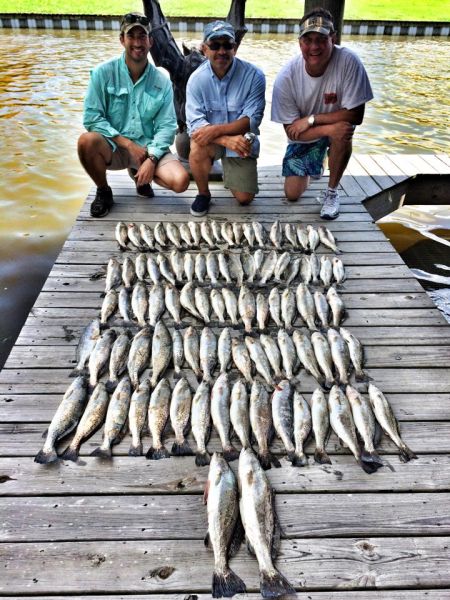 This morning I met my good customers Dr. Nick Hatzis and Cody Jackson at Southern Comfort in Dulac. They brought along their good fishing buddy Brennan Keen and we jumped in Nick's 24 Ranger. Since these winds have had us locked in for over a week, I really had no idea where the fish might be, but I was headed south with a plan. With southerly winds being a major factor in water clarity, I really didn't have high hopes for the day, especially with the degrading forecast. Luckily, we dodged the morning storms that skirted us to the west and we were off to the coast. The first stop I decided to hide in a protected area and the water was actually fishable, so the lines went out. I hadn't fished this spot since last summer but it's always a holding ground for speckled trout this time of year. The fish cooperated. Immediately we started slinging in the yellas one after another, keeping 1 to 10 fish. This went on until I had boated about 25 trout only keeping a handfull. All of sudden, the skies cleared and the wind laid down just enough to poke the nose out into the bay and see that it was calm enough to fish. I knew right where to go. I found emerald green water next to a platform out east and it was game on! Big trout too for this neck of the woods! We did some damage when the bite was hot and stopped at 90 trout. Tomorrow looks trashed but hopefully this weekend will produce some good fishing. My customers had a blast and we're scheduled to do it again next week! I have the 28th and 29th of this month up for grabs if anyone is interested!

FLiesitdies
Thats what Ive been waiting on. I'll be on them in a couple weeks when I get back from Cabo can't wait. Spring has been way too long. Congrats buddy awesome trip
Reply