Reelywant2fish
I am in desperate need of advice.I have been trying since last year to catch redfish but have come up empty handed every time! I have fished mainly in lacombe off of lake rd but have also made a trip to shell beach recently.I feel like i am doing everything right but i cant bag a single one! I fish the marsh area with 2 rods,one with a popping cork and 14'' leader and the other with a 1/4 oz jig head.For bait ive used DOA shrimp and the gulp alive shrimp as well as fresh cut crab.Got redfish fever bad,can anyone point me in the right direction?? Note that i am new to saltwater fishing....
Reply

CaptJS
No problem
Watch betweenthebanks.com and you will have all the info you need.
Reply

brad1983
looking for reds
Fished lacomb on thursday (high winds) ccaught nice bass on spinner bait. Caught a few reds this am close to irish bayou. hope this helps you out some don't know how far your traveling.
Reply

Reelywant2fish
Thanks
Thanks for the info....fished lacombe today with no luck,I like to stay within an hour or so of ponchatoula,although possibly planning a trip to Leeville on Memorial Day.really I'm willing to go where I'm guaranteed catching reds!
Reply

TTownsend
Gold spoon
Try a gold spoon on sunny days, also I prefer tko to doa in the pink champagne color and I always do good on shrimp creole and lemon head matrix shad in clear water, dirty water I like black and chartreuse vortex shad or purple and white all under a popping cork but all around for me the tko produces the most I've had a little success on the gulp mantis shrimp rigged with a weedless weighted worm hook and twitched along bottom also on top dogs or manns crankbaits
Reply

Reelywant2fish
Thanks
Thanks for the tips,I've been meaning to pick up a spoon,I will check out those tko shrimp as well
Reply

dr.speck
yakkin for reds
i have had the same kinda luck around that area. try reggio, hopedale, point au chein, etc. saturday we had good sucess in reggio, lemme know and ill email u the areas we've been having luck in
Reply

I always have one rod with a gold spoon tied on it when I fish the marsh in my kayak.

Don't buy the cheapest spoons. They'll rust before you're finished fishing that day.

Fish parallel to shore. In the marsh reds are often found along bank anywhere from 3' to 3' from the grass.

Go sloooooooow when you're back in the shallow marsh and be stealthy. Pretend you're squirrel hunting for redfish. Don't bump the boat with your paddle. Don't carry on a loud conversation with a partner. Stealth is your friend. Redfish in shallow ponds are easily spooked.

Ignore most of the swirls you see in or near the middle of a pond. Watch for big 'V's being pushed near the grass line. Don't try to drop the spoon on his nose. Put it 3-10' in front of him (depending on water clarity) and let him come to it. As he gets close I like to twitch it away from him in an effort to imitate the scooting of a small crab that is trying to escape danger.

Fish in front of a weather front or 2-3 days after. For 1-2 days after a front, stay home and do honey-do's.

If I were in search of redfish, the Northshore area would not be on my list of places to visit. Surely they can be found there but the broken marsh areas hold lots more. 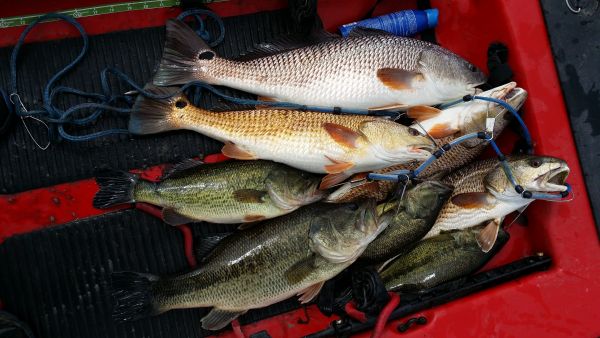 Ive yaked the Northshore area the past couple yrs and if you'd like I'd show you a few spots I've learned for reds , specks and bass ..I'm usually fishing one day of each weekend ..
Reply

Reelywant2fish
Northshore
Sounds good,im always looking to team up with some one who knows the area better than me. Those are some nice bass by the way! i do ok with bass in manchac and rudock
Reply

NOLAJim
Gols Spoon
Yak-a-Lou
What gold spoon would you recommend? Never had much luck on those.
Reply

Yak-a-Lou
Gold spoons...
The easy to find, dependable and reasonably priced ones that I would recommend are the Johnson Sprite weedless spoons.
Reply

Dr. Spot
shrimp and Shell Beach
A lot of purists advocating spoons here...but this fellow wants to catch some fish and break the ice first. Here are some tips.

First, don't fish the northshore. Fish in the marsh systems south and east of New Orleans where there are a lot more redfish.

Second, use fresh market bait. Not the junk marinas sell that used to be live shrimp that died, but a seafood dealer or a shrimper...in other words, shrimp you personally would eat cooked. Live shrimp are fine, too, but more expensive...and sometimes the reds want a little smell. I usually go with both live and market shrimp and see what's working best, but market will catch the reds fine. You will have to deal with stingrays and cats, of course, although way back in the ponds there can be less of the trash fish.

Spoons are fine, but require some skill. And, sometimes (most of the time?), the reds hit bait better.

Third, fish the right conditions. Usually an incoming tide and high water periods are best and trigger a feeding period. A falling tide is good too, but usually just in the fall. Reds really loving going deep in the ponds in such conditions, perfect for yaks. On the other hand, dead low tide is usually a bad time to fish.

There are some other variables...for a full moon, reds feed at night and early morning can be slow since they aren't hungry; wait until late morning. Reds also feed less when the water temp hits 80F in mid-summer; also, mid-day can be slow in the spring; there is almost always an evening bite at sunset.

Finally, go across Shell Beach to the ponds behind the rocks.....fish the right conditions with shrimp, and I can guarantee reds.
Reply

Reelywant2fish
Shell Beach
My inexperience will probably show on this one,but gotta learn....Saturday i did launch in Shell Beach from Campos Marina.I made my way across the canal and went behind the rock wall to the right to enter the marsh only to discover that it looked dried up.The water in alot of the area looked no deeper than ankle deep and the grass was matted down on top of water.Despite this,i paddled through a ways and saw that there were some deep spots.I eventually decided that i didnt want to continue in the ''wrong'' direction with water that was too shallow and turned around and went back across the canal.I stayed parallel to the shoreline and thought i landed a red when my popping cork shot under and i had a fight on my hands...only to discover that i had caught a 17' hardhead cat.My question is this: What did i do wrong? Why was the marsh so shallow and how could i have known that prior to driving out there?
Reply

Samarai
market bait
That's why its called fishing. we all get skunked one time or another. U just keeping plugging away until u find them. Market bait under a cork is my red machine. If I'm targeting reds, there is no other setup.
Reply

Dr. Spot
conditions!
It is shallow back of those rocks, and if its low tide, or any kind of west wind, it will be too shallow. Also, except in the winter, reds usually don't bite at dead low water. They key is an incoming tide with a good range, or an east wind. A south wind also pushes the water up on the east bank, but an east wind is better.

Reds can be fickle and bite in windows. Last Sunday I launched out of Hopedale in dead low conditions. There was also a full moon the night before. I saw lots of nice reds in a pond, but they refused to bite. In fact, my cork scared them. This happens a lot. But I knew they would bite around noon with the incoming tide. There was a 2-ft tide range. Wind was becoming easterly. So, I poked around in Lake Eloi, catching a few trout but slow, eating an early lunch, and listened to music while watching nature. I was glad to be fishing solo, because some people get impatient at the lack of action for 4 hours. At 11AM, I went back to the same pond, with the water up, and steadily caught a limit of 25-inch reds, then catch and release.

Planning for the feeding window is the most important part of any trip. Its even more true for trout, but in the summer they are in the Sound and I don't think trout are worth 20 gallons or more of boat gas (most here will disagree :^> )

Also, those deep slots behind the rocks can have a mixed bag of fish....drum, reds, sheephead, flounder, some trout.

A bonus at Shell Beach are the bass in the Yscloskey canal. Freeline a live shrimp around the pilings, you'll get a few. The bad news is, since they closed the MRGO, there are fewer saltwater fish near the launch and the reds are smaller, but there are still enough around to keep it interesting.

Also, lots of crabs. When the fish don't bite, throw out line with chicken necks in the ponds. Wrack up a bucket.
Reply

Reelywant2fish
Advice
Really appreciate all the great advice on here,im excited to get back out and keep at em! One more question and i will leave you guys be...Wheres the best place i can check for tide/wind conditions before i head out? Weather.com does have a fishing report section with wind but no tide information.
Reply

blackfishmatt
Low Water
I was out there Sun. Only been there 2 times before and yes the water was very low. There was at least 12 other kayaks out there also. Never seen that many before. Again I am fairly new to this as well. Have caught a few- but nothing worth being proud of yet. Everyone I talked to said that low water was not normal. All the comments on here are good and I will start to try them. One guy told me he caught over 100 but only 3 keepers. I took that as humor caused I watched him for about an hour and didn't see him catch anything. If ya wanna plan a trip shoot me an email. Again I am no expert but I am trying- good luck!
Reply

TTownsend
market bait
Dr. Spot I have to respectfully disagree about market bait whilst fishing the marsh and ponds from a kayak as our major disadvantage is speed, I find myself and most people tend to wait out a spot more with market bait when in a kayak the goal should be to cast as many times as you can in as many different areas you can, by no means am I against dead bait just don't think it to be practical or efficient in a kayak
Reply

Dr. Spot
waiting game
Last 4 trips, 4 limits of reds :) but it is a waiting game. Sometimes I use two poles. To each his own. Lures require a lot of skill and technique, especially in grassy bottoms. Sightcasting does even the lure game, though, for those who learn to spot them or have a high platform.