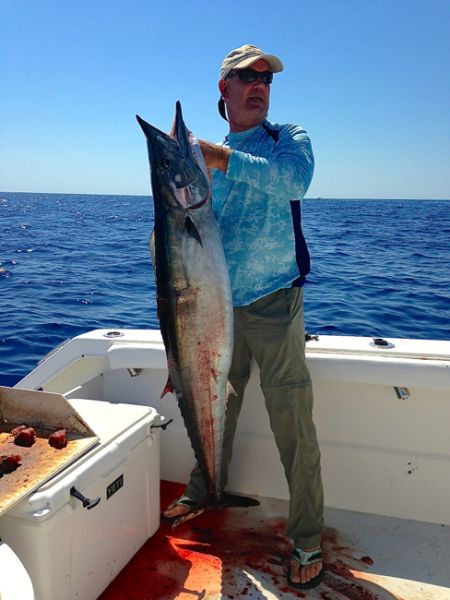 Over the past several days summertime finally feels like it has arrived. We have had several cold fronts in the beginning of May, which caused temperatures to drop and the winds to blow. The first part of May was fairly windy causing us to cancel a few of our trips or taking the groups inshore fishing that came from across the country and were down for a few days. The Yellow fin Tuna fishing could not be better right now. On just about every day out the tuna have been cooperating, some days better than others of course. It is all about timing and location. If the spot you were fishing early in the day wasn’t producing any fish but showed sign that there were fish in the area, you had better be back later because it will probably be a much better spot that afternoon and produce fish. Most days though it has been good upon arrival, but, some days it was fast and quick, other days the catching was more spread out thru the day. The dorado are starting to make an appearance but the temps. Offshore right now are still in the mid 70’s, which is cool for this time of the year. Last year the temps. Were in the 80’s at this time but after the winter we had it is no surprise. The water has been blue with a few good pushes of clean water from the South but not much action from dorado just yet, but it is coming. Around the rigs we are still catching a bunch of Amberjack. The winter months were tough on them with the low temperatures, which probably made them lethargic, but, they are wide open now. We are also going to start fishing for mangrove snapper, red snapper (June 1-9 this year which we still have some open days to do.) cobia, and grouper. Every year one out of all the species (except for tuna which seem to always be abundant) outshines the rest as far as numbers are concerned so we are looking forward to see which one shows up in the most numbers. We still have a few days open in June as well as July for those who plan on a fishing vacation this year. There is plenty of lodging available as well.