I've begun looking into getting a good blood tracking dog. My father and I each lost a deer last season, and stuff like that eats me up. The problem is, I need one that is also a good 'house pet' or 'family pet'. I have been doing some research, and it sounds like the wirehaired dachshund (yeah, I was shocked too) would be ideal, but I can't find any breeders close by.

Do any of yall use tracking dogs? If so, what breed? Can you share your experiences with me? Give me the name of a good breeder?

Thanks guys. Counting down till October.
Reply

Proud Pop
My Duck Lab
I spent one afternoon letting my duck dog play around with a one week old deer leg and follow its sent through a trail I made in a lot next to my house. The following week he led us to a deer and found three that season. I would recommend a lab, great dog for hunting and a family member.
Reply

rwray
bloodhound`
I have a bloodhound that I use for blood trailing. Friendliest, most loving dog I have ever owned. She stays in the house and is completely housebroken. she sleeps in her kennel at night with no issues.

Just can't let her escape or run free. when she gets on a scent that interests her she's gonna find it.

It's amazing to watch her work.

Once I put her bell and gps transmitter on her collar she knows it's time to work. She goes from being a pet to working dog.
Reply

hog bit
Location
Where are you located? I have a black mouth cur that isn't working out as a hog dog. She is a sweet dog and would make a great pet inside or out. I have no doubt that she would be able to track a wounded deer.
Reply

That guy in the white boots
tracking dog
A guy in my hunting club has a dog called a blue lacy. It looks very cool. Its got a nose like a blood hound. It has the temperment of a lab. Made him a good pet too. Looks like a lab/australian sheep dog mix sort of.
Reply

Mrbaker
Catahoula
Got 3. Best dogs I ever had. I just sold 10 pups.6 for blood dogs.If you do decide on a Catahoula go with a female. Easier to train. My 3 year old female has found about 15 deer. She loves to retrieve a ball which makes her a hit with the little kids at the camp. She is very loveable. My male is about 2 and will track but still learning. He is full of mischief. Gets into everything! The males sometimes are more of a one person dog.I agree with the comment on the blue lacy. Would love to have one.I kept a solid grey female pup because she looks like a blue lacy & already showing a good nose. Very smart too !
Reply

Lamplighter
Just Asking
Do you know why yall lost deer ? What went wrong so U can make adjustments ?

The dog thing is getting quite popular these days. We have to watch that we don't use that as an ok to relax on the prevention
Reply

Mrbaker
Lost Deer
I do agree that as hunters we have a responsibility to have our tools of the trade tuned in and engage the brain before taking the shot. We also have a responsibility to do all we can to find the game after the shot. Of the 15 deer that my dog has found only 2 were truly lost. One was shot in the back end while running. That one went about 900 yards in a cut over to a broom sage field. The other was a bow kill that went 3/4 of a mile through the woods and across a cut hay field. This was at 9pm at night and was the young mans first bow kill.Several finds were bow kills that the hunter chose to come back to camp and give it time to bleed down and others were gun kills that the hunter waited till I got in and asked me to bring my dog. We found most of those deer under a 100 yards from were the shot was made. And yes there have been some that we did not find.
Reply

WhoDatTiger619
Just asking
Light, I agree. I do my best to make ethical shots at all times, and I always search hard for any animal I shoot. We lost my Dad's deer because there was very little blood - pin drops to be exact. He shot it with his bow, used Rage broadheads, and felt good about the shot and its placement. We looked for hours and could not recover. The one I lost I shot with a .270 at 100 yards. I know it was hit, but it had rained that morning and finding blood was damn near impossible. Again, grabbed some friends and looked for hours. They found the carcass under buzzards two days later.

Part of the problem was I was using ballistic tips. I did some research at the end of the season and it seems several hunters have had issues recovering game with ballistic tips, as the bullet moves too fast and does not expand appropriately. I have since switched to Nosler Partitions.

I do not want a dog so that I can become more lax with my decisions on whether or not to take the shot; in both of those examples, the deer were shot at reasonable distances, broadside, with quality equipment. Fact is, every hunter is going to lose a deer at some point. If I can decrease the odds of that happening, or help someone at the camp find one of their deer, then I'm all about it!
Reply

krazykarl
my opinion
Miniature dachshund is the way to go. Easy to carry along and they can get in places that a bloodhound can't. Father n law has one and she finds them every time. Don't get me wrong we still like to find the deer with a blood trail, but its nice to have that extra help from the dog. The only other dog a would think is a jack Russell, they have a heart of a lion!
Reply 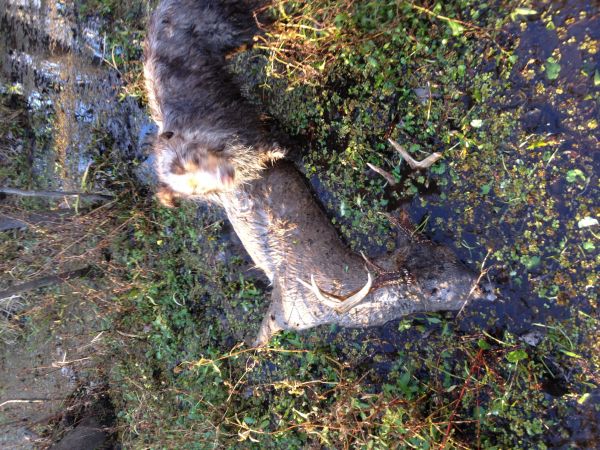 I'm on my third blood dog. All Australian Shepards. I train them to do only blood. There too many deer in the woods to have the chasing random deer In the middle of the night. We mostly bowhunt, but with three girls and nieces and nephews gun hunting he gets plenty of practice. The important thing is to put him on as many actual blood trails as possible. No matter how short or how simple or easy they are. I have used the same deer three it four times in a day. Weather permitting. The more the better. The whole first year I use a leash and harness to keep him close. I also strongly recommend a bell around his neck. I have had no luck with them barking when finding deer. They usually just lie down next to it. The bell stops ringing and there you go. Also let's you know where he's at and how far away he is. Put it on every training trail. I use mostly blood from steaks at the grocery store. Plus I get to eat a lot of steaks;). Too hard to get and keep deer blood on hand. I get three or four steaks, remove the soak pad that comes in the packed meat. I save that and put it at the end of the mock trail. I don't drag anything cause that's not how they'll follow actual trails. I put the steaks in a ziplock bag for two or three days and collect the drippings with a nice size serringe and actually drop blood drops to make a zigzagging trail. Start off small and reward him plenty at the end of every trail. Hot dogs work great. When he gets to go on real trails only put his bell on when he hits the woods. He'll learn that when he hears the bell it's time to start looking. Good luck.
Reply

charliesalt
WhoDat
Guy, my yellow lab has never missed finding a deer that I've put her out on. I trained her when she was about 10 months old and she's still getting it 9 years later.

I can't imagine anything better than her.

Just my 2 cents worth...
Reply