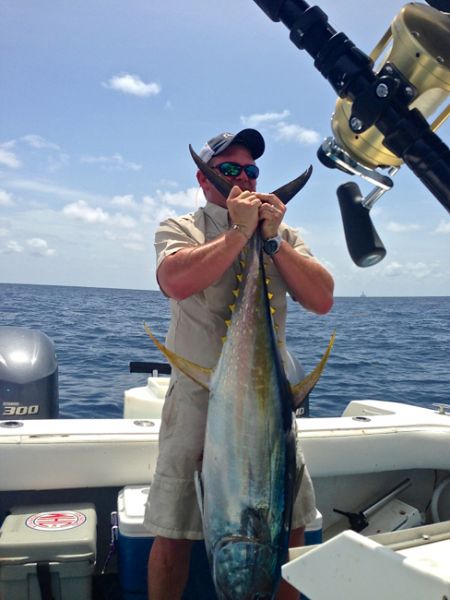 Where to start? I guess first with the weather. This past June and now into July has been the most calm and dry early part of summer we have seen in a while. Compared to last June which was all but shut down due to wind and rain. So far the weather has been as good as you can ask for when it comes to fishing. The fishing part of it has been as good as it always is this time of the year. The blue water fishing for Tuna has been very good, of course some days better than others, but for the most part they were cooperative. June is usually a month that can go either way for Tuna but this past June has produced a lot of Yellow fin. July and August are usually the better months out of the two when it comes to Tuna fishing so it seems we have a lot to look forward to. The Mahi Mahi have shown up this summer. It has been a little better than last year when it comes to Mahi fishing, but then again, the rip lines have been excellent offshore as well. So over the next month we will primarily be fishing for Tuna and Mahi Mahi offshore, and as always you can get a shot at a bill fish certain days. Around the rigs in shallower water the Mangrove snapper bite is as good as it gets. They are hungry most days so catching a box full has been fairly easy to do. Mix in a few cobia with that and you’ve got more fish than you know what to do with. Amberjack season opens on August 1 so you can add that species to the box starting then. Overall, the fishing so far this year has been very good, mainly contributed to the weather end of it, but as usual the fishing in Venice is hard to beat any time of the year. We have another week long round of trips starting tomorrow so I will have some good stories and pictures of fish to go along with it. We do have open boats for offshore and inshore throughout July and August so anyone interested this is a great time to go. Lodging is available as well at the Marina.