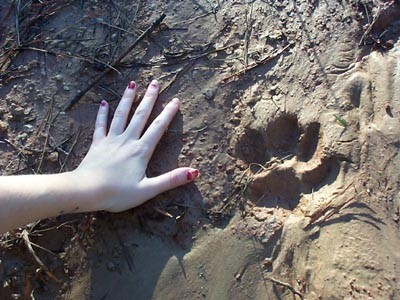 Your question and photo was forwarded to me to reply.

It certainly resembles a cat track to me and if so I would surmise that it is the right front foot of a male. The track does not look very fresh and it appears the animal slid in the mud. Both of these things can distort the fine details necessary to identify an animal from a single track. Also, when I enlarge the photo it becomes too grainy to see some of the details I was hoping for. Another thing I’m considering is that deep mud can make tracks appear larger than they really are (ie this could also be a bobcat). I’m also curious how small the lady’s hand is (length of the index finger from knuckle to tip would help with the scale comparison). For example, my wife has very small hands. Despite these things, I cannot rule out that this track is from a panther. Some of my reasons are as follows. Typically the pads of canine tracks are more triangular with the top portion of the pad being fairly pointed and both lower outside portions of the pad being somewhat pointed as well. The pad in your photo appears to have a flattened top edge and the lower “corners” of the pad appear to be straight or flattened rather than making a sharp angle. Both of these features are typical in panther tracks. One feature that is very characteristic of panthers is the 3 lobes on the bottom edge of the pad. Dogs do not exhibit this trait. Unfortunately, this feature is indistinguishable in your photo. The arrangement of the toes is also characteristic of a panther in that they are primarily pointing forward from the pad; dog toes tend to be splayed out more to the sides. I rarely rely on the presence or absence of claw marks when distinguishing between dogs and cats since this can vary depending on how the animal stepped and what the substrate was. However, in deep mud such as this I would expect to see blunt claw marks if they were canine. For comparison of opinion, I’ve asked two other biologists with experience at identifying panther tracks. Both said, based on this single photo, that it was inconclusive.

If you have any more photos I’d love to see them. It looks like it was a fairly muddy area so there should have been plenty of additional tracks. Also, if this was taken recently, is there any chance you could get back out there and make a plaster cast and send to me. Seeing the track “in person” is always better than looking at a photo. I’m also curious where you took this photo. I noted your email address is from Southeastern Louisiana University, is that correct? Does that mean the photo was taken in Louisiana or were you on vacation somewhere?

I’ve attached a photo of panther tracks that more clearly shows the classic traits associated with panther tracks. I hope this helps.

bryan0928
bobcat
Yea, I don't think that's a bobcat. It's as big as the lady's hand. A bobcat that big would be what's called a cougar, and yes, they do exist in Lousiana.
Reply

Travis Faircloth
Verified
As far as I can remember, the 'cougar' track was verified by a wildlife biologist as being a pantherine cat at the time it was reported back in '03, but he declined to comment on what type of pantherine cat.
Reply