WHY???
Oil spill. NO.
Over fished YES
Too much pressure on the Trout as I think they have been virtually over fished
Hundreds more fishermen plus guide boats going out daily equals way less trout
There are at least 16 camps for sale now from. Laparouse store to the end of Hwy 56
Cut the limit to 15 ASAP
Joe Ledoux
Reply

Albino Buck
poo poo your full of poo poo, the really late spring has even throwed off the shrimp seasons, why would the trout be any different than any other fish species this year
Reply

boo-hoo!
No proof of that ! Ever so many years we have a slow down, and just because the bite may be running late people want to blame the fisherman.When the bait fish or shrimp move in so will the trout.YOU ARE STILL CATCHING A LOT OF TROUT , OR MOST PEOPLE ARE, SO IT'S NOT THE NUMBERS OF FISH IT'S THE SIZE. Just wait for cooler weather and the fishing will get better !
Reply

boo-hoo!
No proof of that ! Ever so many years we have a slow down, and just because the bite may be running late people want to blame the fisherman.When the bait fish or shrimp move in so will the trout.YOU ARE STILL CATCHING A LOT OF TROUT , OR MOST PEOPLE ARE, SO IT'S NOT THE NUMBERS OF FISH IT'S THE SIZE. Just wait for cooler weather and the fishing will get better !
Reply

KNOTSANE
My buddy is down at his camp this weekend and they loaded up with 110 fat trout. (his words and photos) The trout are down there somewhere.
Reply

olreprobait
There has been a lot of high pressure this summer, makes the fish feel full and they will not try to eat any more.
Reply

Capt. Travis Miller, Millertime Fishing Charters
Use the data before making knee jerk decisions. I have some guide friends that have been smoking the trout in Coco by 9 in the morning so they are out there. I won't lie I was a little surprised to hear where they were catching them which may also throw fishermen for a loop. According to Randy Pausina he said that the average fisherman catches I believe it was 3 trout per fishing trip which would mean to make a significant difference in the population you would have to decrease limits to under that. Everything has been off this year in Du. The shrimp never came inside in any numbers, the weather pattern has been challenging, and now the heat is here. I'm not one for government to make decisions without data and if the data were to show a decrease in limits I would be all for it but once it's taken away it won't be coming back. What people aren't acting on is how our marsh is sinking and eroding away. We can point figures but that's the elephant in the room and because of the cost, the politics of putting a lot of people out of business it isn't being addressed.
Reply

Alaska Cajun
Trout fishing peak season started much later this year. Shrimp (brown) was also delayed. Transition started later than usual--mid-August instead of early August. My opinion is the trout were spoiled and wanted nothing to do with artificials. They wanted LIVE Shrimp. I had a good season in the area, but had to pay the price for live shrimp. Overfished? Don't believe. Can't remember back to 1975..................
Reply

semper3373
Once the limit drops, it will most likely take a long time before it goes back up. Only here because were coming down for 5 days this week/ weekend. In Florida it was the mid-90s by the time the red-fish population was where it needs to be in our zone. It took 15 years for them to actually raise our limit to 2 redfish!

They will drop your limit in a heartbeat, but if it takes half-a-generation or more to get it raised when the data shows it can be, you don't want to react too quickly.
Reply

Squid Row
PooPoo,
Do your research before making any comments like that. yes everyone has an opinion and the right to say what they think but blaming a slow season on being over fished is nothing but a lack of info, facts and common sense.Talk to a biologist with LWLF, any of them will tell you we are in a bad year due to the harsh winter we had and the late snow melt coming down keeping the waters cool that effected the bait fish. Not to mention the abundance of fresh water poring down from up north and all the rain we have had here. Even the Crabs in Maurepas & Ponchatrain have been off this year.
Reply

KeithP
I'm glad to see someone else has enough sense and experience to see the truth. We had a camp on Bayou Robinson. I've been fishing Port Sulpher for 45 years and remember many times running out of room for fish or just tired of catching them. When we got 50 cents a pound for speckle trout and most of the time couldn't even sell redfish.
I believe its many things contributing like oil spill, too many fisherman Loss of marsh and too much freshwater, which is needed to reclaim and reduce the loss of marsh. There's a lot more fisherman because of faster boats, gps and phones. There were many weekends at the camp when we wouldn't see another person the whole weekend. If you broke down you slept in the boat until someone came look for you. We do need to limit trout to 15 and the fishing guides should not have a limit to give to their clients.
Reply

KeithP
Its clear to me reading the comments that there's lots of inexperienced fishermen and fishing guides here. Of course some fisherman are catching trout. Its evident to me the ignorance when someone thinks a hundred trout are a lot. Almost every day during the summer anyone on the beach could catch hundred trout in a couple of hours. Now a hundred trout is suppose to be a big catch . In the seventies reading these reports would have been confusing to believe someone would post about catching only a hundred trout. I remember the trout hitting the caulk so much there would be hundreds of teeth marks on the caulk alone. Eventually they will reduce the limit.
Reply

Capt. Travis Miller, Millertime Fishing Charters
I'd like to know why some say we should the limit to 15? Why the number 15, why not 20 or 12 or 5?
Reply 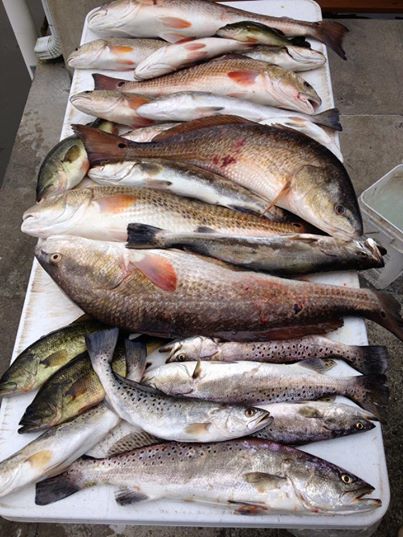 I don't see any fishing reports from PO PO and Shooter 55 if fishing was so great where are the pictures and reports for the past 20years. Did you fish after the freezer years ago. Lake Charles reduced there limits and all they are catching are reds also. With NW winds everyday trout fishing is going to be bad case closed. Every time I seem light SE winds trout come over the side like crazy. Do you use live bait and will you run an few more miles for that off shore wind location. Experience of fishing for 50plus years has shown me that conditions set the catch action. One more thing I remember when gill nets use to catch 25K in a day. Big rigs with refrigerated trailers use to load with fork lifts. This is around the great times you are talking about. Just think how many guides it would take to catch that many trout.
Reply