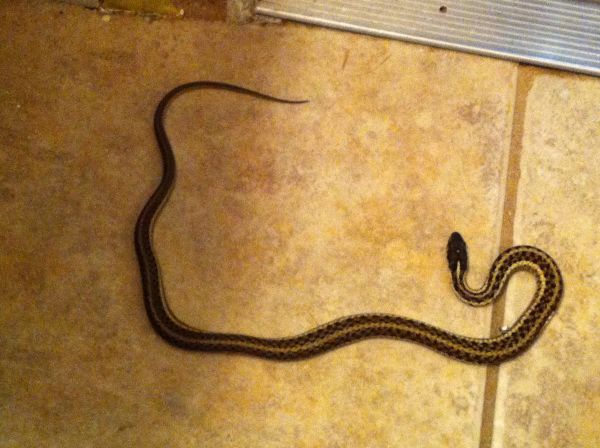 Does anybody know what type of snake this is? Not that familiar with them.
Reply

devinf224
Thanks pistachio. That's what I thought it was, just wanted to make sure.
Reply

BayouWildOutdoors
Thats actually a gartersnake. The ribbonsnake is much more common and there are 3 subspecies of ribbonsnakes in LA. The slight checkering down its body and if you look at the lip scales there will be black lines which is the positive id for garter vs ribbon. The ribbon and garter are both in the same genus Thamnophis.
Reply

LaFisherMenKC12
I use to trap snakes for a hobby and research them. Most snakes in Louisiana are non poisonous. The only poisonous snakes are (In order from deadliest is – A. Coral Snake B. Rattle Snake/Cotton Mouth…. and least the copper head. I see these snakes everywhere and I’m 90 % sure it’s a Western Ribbon Snake…or it could be the Salt marsh snake or common garden snake.. Look at its head to the one on LA snakes, had a small dot. These snakes love gardens, and shaded areas. I like to have them around to kill bugs. Most people will not get close enough to ever tell, but if you can a snake, ONLY in Louisiana, and if it has a Cat’s Eye (slit) then it’s poisonous. If it has a DOT in its eye it is harmless. EXCEPT the Coral snake, it has a dot, but be careful because the Coral looks similar to a certain types of snakes such as the milk or king snake. The eaisest way to distinguish them from the coral is red on black then venom Lack, but red on yellow kill a fellow. Hope this helpsnhttp://www.wlf.louisiana.gov/serpentes/western-ribbon-snake
Reply

The snake is a garter (not a garden), Thamnophis sirtalis, easily confused with the ribbonsnake Thamnophis proximus. We have 3 subspecies of ribbonsnakes in Louisiana: western, eastern, and Gulf Coast (saltmarsh). The western and Gulf Coast will also hybridize. The checkering is what makes this a gartersnake, and you can also turn the snake over and check out the vent to tail length
Reply