BoysFromIllinois
is the gulp shrimp really worth the money? I know a lot of captains and weekend warriors both are switching to it for specks and reds because live bait is 'to expensive' but 10 gulp shrimp is 20$. and are they better then the vudu shrimp. last year I had the best trip ive ever had thanks to the vudu shrimp but again their on average 7$ for 2....
Reply

mikeymike
I've had great days on both, but the Gulp! always seems to pull through when I can't buy a bite on the Vudu. Most of the time the Vudu gets the job done tho.
Reply

300 Wby Magnum
I bring live shrimp, gulps, and vudu shrimp. once you get the school going, switch up to the gulps or vudus. you can also rig a drop shot with a treble hook, but instead of the weight, put the biggest vudu shrimp, or a small 1/4-3/8 jig head with a gulp swimming mullet. Put a live shrimp on the treble hook and you will catch doubles all day. Put the vudu on the bottom, and the gulp on the treble through the nose (looks stupid but it works), and you will still smash them. Figure out which theyre hitting more, and double up on them. Once the schools going, they will hit anything.The treble hooks help get them going, and it makes it easier to hook the small trout we've had in all the waters. They should be keepers now.

If hardheads readily hit the gulps, you know they work and taste like something thats natural
Reply

bullcoon
Been using gulp since they came out. 3inch white under a cork. Only problem price wise is when a red or trout tears it up when its the first fish caught. Most of the time I can get 10 or so trout or a limit of reds on one.
Reply 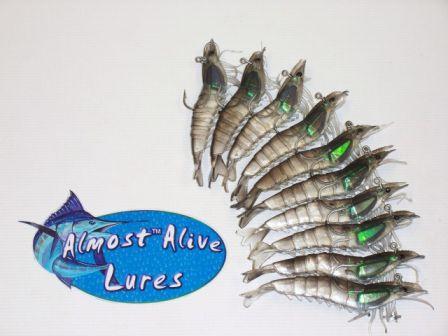 The almost alive shrimp work very well for the trout. You get 20 in a pack on eBay for 35.00 with free shipping. They come in a verity of colors.
Reply

300 Wby Magnum
Those almost alives look pretty good. I might have to try those. How do they hold up?
Yea those gulps can get torn up, especially just pinning them on a treble hook by the nose
Reply

Dr. Spot
Sometimes...if the reds/specs are frenzied....or you just run out of shrimp. But 80-90% of the time, bait is best. Don't take shortcuts. But keep lures handy for the right moments.
Reply

MROLLAND4
They hold up a lot better then the DOA shrimp. I find the DOA work good but after you catch the first trout the lure starts sliding down the hook. So you have to put super glue on it to get a few more uses out of it. I tried the live target shrimp but I haven't caught not one fish off that lure.
Reply

BoysFromIllinois
what colors do y'all recommend? we will be going to grand isle in less then 3 weeks and id like to have everything before we get down there. will be fishing for a week
Reply

fowlfish
New Penny seem to be one of the best for me. Flounders like the Chart swim mullet
Reply