Is it ok to kill our state bird? 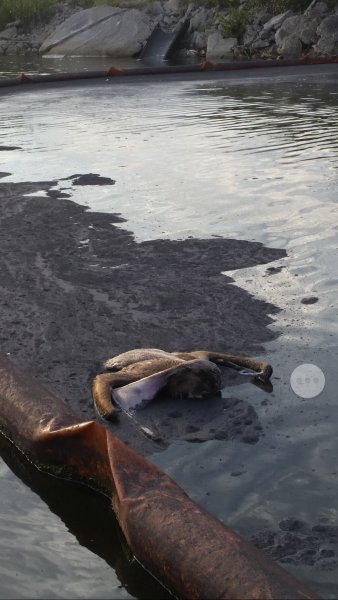 Sounds like an easy question, but I guess it depends on how you look at it.
I wanted to tell you about my recent kayak trip to big lake, lake Charles. I went out fishing with some buddies the past weekend, started fishing the banks when I came across something disturbing. After further inspection I noticed that it was a pelican that had died from this oil slick that was part of a nearby plant.Now being from Louisiana I've seen my share of images in magazines and television, but never this close. Now I'm not saying this is a bp problem. What I have a problem with is one its my state bird that was killed due to this companies negligents.
Second why is it ok for plants be allowed to dump their oil materials freely into the water but as long as they have this barrier it's ok. I mean you don't see me dumping my motor oil into the waterway.
Third wildlife and fisheries patrol and don't have a problem pulling you over for anything. But this pelican is out in the open. Do you really think they would get out of there boats and do something probably not. Why is it ok for them(companies) to dump there trash into the waterways that we fish. Needless to say they messed up that day of fishing.
The reason I'm posting this is, I made a promise to those guys that I would post this and we hope that this will shine a little light on the killing of our state bird is not right. Some of you that fish these waterways will recognize where these pictures were taken, my bet is the pelican is still there but will be removed shortly after this post. We were only a 1/2 mile north of nearby public landing.
Reply

abeastandasavage
its not ok to kill anything like that, but like they say money talks, always will!!!! report them for whatever good that does, a hand slap cause the money will just keep rollin in to the right person, like everything else!!!
Reply

Dr. Spot
Sad post. maybe LAS will do a story in their next issue and ask the hard questions.

Todd Masson, you're also on the clock.
Reply

I don't know the situation but I would guess if this was some sort of oil spill the company isn't going to get off without paying a hefty fine.
Reply

gunrunner
You should notify the US Coast Guard in Port Arthur, TX (Lake Charles is within the Port Arthur District) and to LA DEQ in Baton Rouge.

BayouWildOutdoors
doubt that is oil, but to answer your question, no its not legal to kill a pelican. Only gamebirds and a handful of species can be shot legally (pigeons, starlings, house sparrows, etc.)

No telling how that pelican died. Last year at Calcasieu Point cleaning station I took pics of at least 8 dead ones there (no idea how they died0
Reply

rocknet
If a company has a spill of less than 50 gallons, they do not even have to report it, but are required to make every effort to clean it up. If the spill is over 50 gallons, the Coast Guard requires, by law, to report it to the National Response Center, NRC. I have seen many, many spills out in the marsh around oil facilities and tank batteries. I doubt many were reported some years ago, but now, they generally report them. The Coast Guard does not generally go out there, unless it is a large spill. Once they make a report to the NRC, they must make a follow up report on clean up.
Reply

rocknet
The pics of the conveyor belt going into the steel storage tank and out of the tank looks like a grain stowage tank. They do not store coal in those tanks. The ship loader on the loading dock probably has large motors and gearboxes. Those large gearboxes can hold 20, 30, 40 gallons of oil. I would guess that plant had a gearbox crack, or some other problem with the drain on the gearbox. Could have come from a vessel also.
Reply

mercman70
Yes its ashame to see a dead pelican,but who knows how it died.These companies have come a long way since back in the day as far as environmental responsibility goes.Believe me,I work for a major chemical company and first priorities are safety and environmental concerns.Accidents do happen,like if you were to run into something with your lower unit and the oil leaked out.Would you report that?Looks like whatever was going on there they had a handle on it.One more thing.Just remember how many of us can afford to do our expensive outdoor hobbies thanks to the good jobs these companies provide.Believe me if it gets too hard to operate here they will pull out and go somewhere else.
Reply

Danny_A
Running into something and damaging your lower unit with a little oil leakage is totally different then this. So you are saying just because you work for a major chemical company,then its ok for them to dump contamination into our waterways? How do you figure they had a handle on it? Just because there is a oil boom around the containment area? I know the company can not help when an animal decides it wants to fly into a contanimated area, but if something gets spilt or leaks out into the water they need to have a better system of cleaning up the area faster. you can clearly see that those booms have been in the water for quite sometime. So that area is probably constantly contaminated.
Reply

niteboy82
I don't know what disgusts me more, the images at the top or the defenses attempted by some fellow sportsmen. I love driving my truck, I know where my fuel comes from, but I sure as hell don't want excess waste going into my waterways as a result of the luxury of owning a vehicle. As far as them going somewhere else, you think they will really move all their operations, pipelines, investments because we tell them they have to be more careful with their release of materials into the air, water, soil? Please, mercman, you either work for an oil company or had your conscience bought out by one.
Reply

Shoepick Smuggler
I was with him when these pics where taken.

dude is trying to rationalize it to us by saying same as if we hit something with our lower unit? we were in kayaks.
Reply

mercman70
I stated plainly in my post I work for a major chemical company not oil company.I just came off of job that ran 2 weeks longer than projected at a cost of a cool 1 million a day loss of profit.Y did it last longer?Because of small leaks that they wanted to get fixed.You guys want to demonize these companys but I see it from the inside.Yes they will shut down and leave.I promise you that.Everyday I see empty fields where production units,and good jobs used to be.Look at all the investing these companies are doing overseas.And I realize perfectly that a kyak generally doesn't have a lower unit on it.I was just trying to show a little example to get narrow minded folks to look at things from another perspective.There is a risk involved in all these industries.All the companies that I have dealt with manage it the best they can and stay within the limits of the law.We all have a small amount of responsibility here.We use gas,oil,Plastic(that our kayaks are made from).The list goes on.We need to live with it or give these things up.We cant have our cake and eat it too,Unless you want these companies to leave here and we just deal with the loss of jobs,and higher prices we would have to pay to do the things we enjoy.I don't condone intentionally polluting at all.But lets be sure that's what it is before we point fingers.
Reply

niteboy82
'We cant have our cake and eat it too,Unless you want these companies to leave here and we just deal with the loss of jobs,and higher prices we would have to pay to do the things we enjoy.'

You're right. These 'conveniences' that you speak of will mean so much later on when it's all under water. At least you'll be able to say you had a job and a cheap yak.

To the OP, hopefully someone will contact you for more info. I did refer the thread to a few people that may be able to have it looked into further.
Reply

carlvidrine
I HAVE A CAMP IN THE MARSH OF GRAND ISLE AND EVERY WINTER WE SEE MANY DEAD PELICANS. NO ONE KNOWS HOW THEY DIE.
Reply

rocknet
I am old enough to have worked 40 years on the river here, before 1972 creation of the EPA and OSHA. A lot of folks criticize these gov. agencies, but both were needed back then, badly. I saw lots of deals back then where money ruled, and if they thought it cost too much, they just dumped it into the waterway. The same with the Clean Water Act... to me, one of the most important pieces of legislation put together. Now, that Act is picked apart, and there is another law being considered to protect our water. Remember, good, clean water is important to all of us and all wildlife. I remember reading a story from the 50's, where a large part of Lake Erie burned for an entire summer, there was that much oil and chemicals floating on the water. Most companies today try and do things right, but don't ever think that money is not considered in all operations.... just read the investigation into the Macondo Rig disaster by BP and the lost of 11 men, plenty burned, and the largest spill ever in US. in our Gulf. I worked at a plant on the river, and a ship came in to load cargo, the crew was Chinese. they had to change the oil in the large Diesel engines that propel the ship. At, night, the crew poured many 55 gallon drums of oil into the river to dispose of them. A tugboat captain saw this happening when he noticed oil all over the river. The entire river was shut down, and tugs, ships and barge fleets had to be cleaned. In reading how bad the pollution is in that country, it's a good example of why good laws are needed and enforced, and good stewardship of our waters should be practiced.
Reply