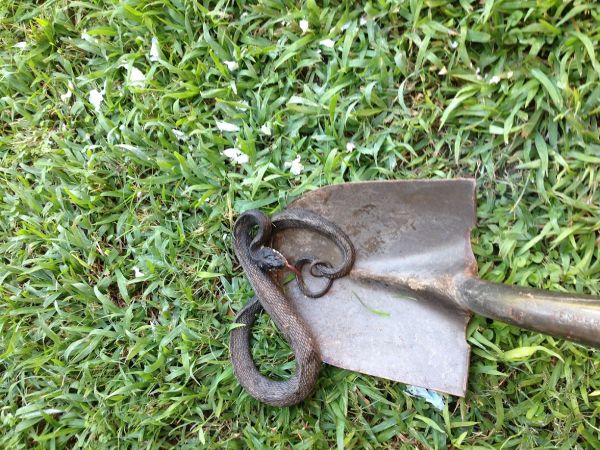 What kind of snake is this? My lab found it 10 feet from the back door.
Reply

JB
You sure it's a cottonmouth? The tail looks too long and thin to me.
Reply

Dbl beard
Pretty sure, look at the high ridge line on his back. I think he's just a deprived one. Lol.
He's black with a diamond shape head so I'm thinking cotton mouth.
Reply

JB
I agree with everything, it's just the tail throwing me off. Wish there was a pic of it's belly, or side of the head.
Reply

Dbl beard
I came across a long snake while hunting off of Angola road one time that was very long. Maybe 7'. Same time of year( mid bow season). It was very lethargic . I looked closer and saw it was a rattle snake. Same way, skinny . Generally most cotton mouths I've seen are fat but I don't know what else it could be with that head. I'm still thinking cotton mouth
Reply

JB
Regular water snakes flatten their head when frightened, to intimidate I assume. I used to hunt and sell water snakes when I was in high school and there were several times I thought I was walking up on a cottonmouth because of the diamond-shaped head. I have killed several hundred water snakes and this one kind of looks like one. Very hard to tell from this angle though. A water snake will have a yellowish belly while a cotton mouth will have a multi-colored belly. A cotton mouth will also have a dark strip over it's eyes while a water snake will not.
I have never seen a cotton mouth with a long tail like that, aside from a juvenile.
Oh well, it's a snake, and looks like a dead one at that. THAT we know lol
Reply

prollymite
A dead one?
Reply

Ricky Pon
Tail is a bit funny, but i would have to agree it is a Cotton mouth. The head shape and marking on the side of the face gave it away to me. I found one last year in the middle of winter (think he was lost) and he had a very profound ridged back like this one has. I think it is malnourished. Maybe why he is so close to your house. Probably moved out of the woods to find a better food source.
Reply

RedFish_n
The snake had a yellowish belly. It was not killed.
Reply

JB
If the belly was yellow, it is definitely a water snake. The belly of a cottonmouth is multicolored.
Reply 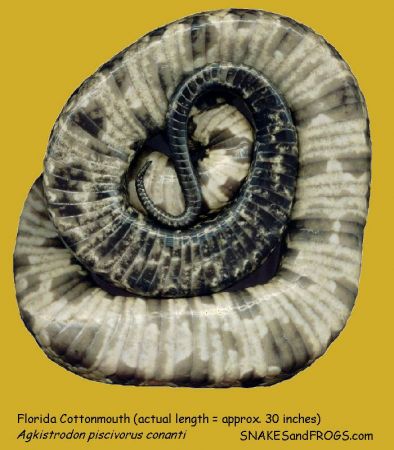 CrCash18
it looks very similar to the one that bit my girlfriend... they resemble the cottonmouth. They are called Diamondback Water Snake.
Reply

BayouWildOutdoors
100% yellow bellied watersnake, completely harmless but will bite you with the quickness

watersnakes will flatten their heads, rattle their tails, and strike at you to mimic their viper cousin the cottonmouth
Reply

Dulacdat
Cotton mouths are usually more aggresive and if the pupils of the eyes are round it's not a cottonmouth.
Reply