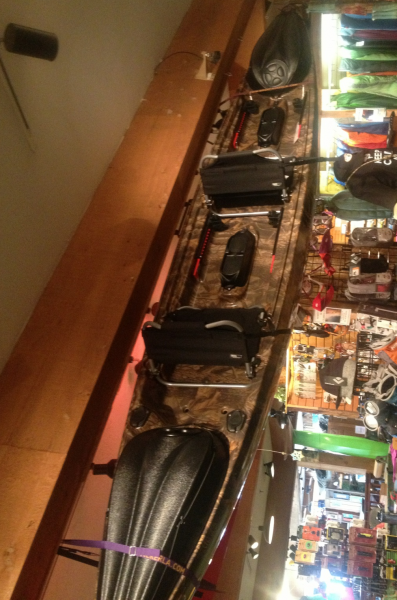 Recently I had a friend who knew someone either at KC kayaks or a retailer who allowed him to do a demo of the new KC kayak “The Scout” for a day. I have fished out of the regular KC kayak for years now and when he told me about the demo I hopped on it. We decided to drive down to lee vile and fish for the day.

The kayak tracked very smooth and quick through the water. I would say this is defiantly one of the faster kayaks I have been in since I have been into kayaks. We were able to cover a lot of ground in one day. This kayak felt strong, the deck and outer hull were tough. I was told they were designing this kayak for the Boy Scouts of America. Most of the Boy Scouts from my knowledge travel through rivers and lakes. With all the rocks, logs and debris the kayak needs to be designed for all odds. In the front and back there is a lot of storage which can be used for holding supplies and we used the rear one for holding our fish. We filled it up with ice and put 10 reds and a few trout in it and it kept them very nice and cold. They put rubber seals and gaskets on them, (including) - the dry storage in front of the seats. I had my wallet and phone in the storage section (by my feet) and did not have a drop of water on them. There were 2 rod holders in the back but I noticed that on the sides, they designed it, so you can mount a track system on both sides of the kayak to install rod holders and whatever. The stability was very nice; we could stand one at a time and fish easily. Also by storing supplies in front and fish in the back (all the weight) actually made the kayak more stable.

I would say from my experience and knowledge of kayaks that I would use this mainly if I was with another person. It was easy to move around with two people and allows you to put whatever accessories you want and the seats were comfortable and they have plenty of storage. I have a KC Kayak and pelican canoe and it made my canoe look like a joke. I could see myself with someone paddling a few miles out in the gulf going after some snapper. I truly believe this is another great kayak that the KC guys have designed.

My friend told me they just put one at the Back Packer in Baton Rouge LA off of Jefferson. I’m, not sure if it’s anywhere else but I’m assuming it will be in time? I took some pictures of it at the store...
Reply