Richard K. Yancey, The good, and the Ignorant! 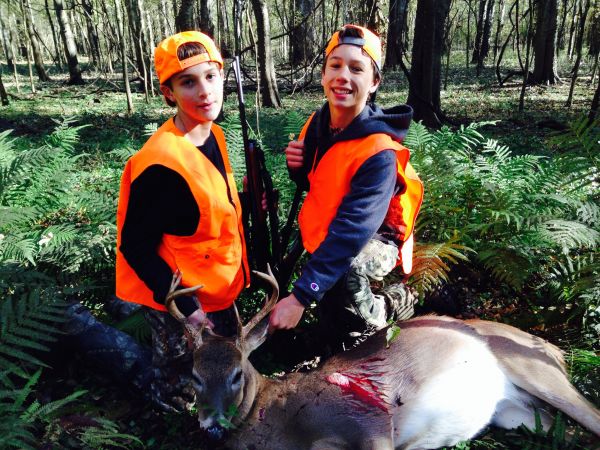 The Good: Friday started off good with a long boat ride up the river with a few friends and kids to our select hunting spot. We had a short trip into the hardwood bottoms that was overlooking the hills and oak trees. I was able to get settled into a tree top, as it was breaking daylight I spotted a doe that had already slipped by but behind the doe was a basket rack 9 point that gave me a small window to pull the trigger. The shot felt good and he went down about 60 yards. The kids tracked the deer like tracking dogs, it feels good when you put in the miles and take a deer on public land.

The Ignorant: Saturday our boat trailer tires got cut with a knife at the boat launch on shell road, a man hunting close said he heard a boat drive up at 6:45am; it came from across the river. He didn’t understand what the air noise was until he walked out and saw two boat trailers on flats. I guess some people got pissed off because we hauled a nine point out the day before. Called the GW and police but they said it has been a problem noting they can do! One of the boaters stated that he was putting his stand close, in view of his boat trailer and hunting.
Reply

Teeeby
This is an on going problem for that exact location. It's the man across the river from that launch, just a little south. Green Camp! He has cut several tires. GW's need to sit at the parking area but it's hard to find good help now days. That mans day is coming
Reply

crain2010
I had my tires cut at the end of shell road that Saturday morning also. When i got to the launch there was only one other truck with a boat trailer and a white ford truck with no trailer. The only boat i seen that morning was parked at a camp across the river with its running lights on. Looked like the guy was just sitting there waiting on something. I didnt really pay it no mind. After i made made my morning hunt i returned to two cut tires on my boat trailer. You must have left already because i was the only truck at the launch with a boat trailer. Good luck trying to find two boat trailer tires on a Saturday after 12 pm. I have been told that this is not the first time that the guy across the river has came across and cut tires. And apparently the law can never do anything about it. I dont think he cut our tires because you killed a deer. I think the guy is trying to keep people from hunting around that area.
Reply

kick-em-up
Was at RY boat launch this morning, three guys drove up, one was in a ghillie suite and had tactical gear, they said one was staying behind and waiting for the person that cut their tires the week before. The others went down river. I hope the GW does something soon it’s not going to be a good outcome. Yes crain2010 that must have been your trailer, we had to borrow a spare tire from someone in the camp ground. It was a pain; I hope they get this under control. We will be their weekend hunting until Tuesday, starting to see signs on the rut starting. Good luck.
Reply

abeastandasavage
if the law don't want to do something, some people just don't want their tires cut every weekend!!!! don't shoot the guy but make him some sorry he did it!! should solve the problem!!!!
Reply

PacificNorthwestTransplant
Where is this boat launch you all are talking about? I want to be careful.
Reply

abeastandasavage
its ashame, this happens everywhere sooner or later I guess! wouldn't be a bad idea to carry 2 spares and keep them in the truck! when it happens you would sure be glad you have them!
Reply

225quackaddict
Sadly, this has been happening a lot up there. Between vandalization and thieves red river is becoming a pain in the butt!! I hunt up there quite often and have seen my fair share of dirty moves. I don't deer hunt but i squirrel hunt and waterfowl hunt the whole WMA. We were duck hunting off the atchafalaya river, right there, at the launch on shell road. We left out early , made a decent hunt and trekked back to the launch. When we arrived back someone had stolen a couple chairs and our boots out the back of my truck. Who steals someone else's boots?!? Sucks to ride home with no treads on your feet! hard to explain why you were just in the woods and in your socks at the store.Another time i seen two sets of trailer tires cut and a month later someone else's truck tires were slashed. it was an ATV trailer and a boat trailer. This passed weekend i went duck hunting off the main hwy in the flooded timber off the mississippi. i was a little late so i was moving fast. Got a little hot so i took off my jacket ,threw my gear in my pirogue,and i swore i tossed the jacket on top of the decoy bags but i Left out in a rush. I usually put my keys/wallet in my jacket pocket just before i left. Cant stand to sit on my wallet and I'm weird about leaving my keys at my truck ,since its widely known,so many people do it. I set up tossed the decoys out and attempted to hide. After i cooled down i reached for my jacket. My heart sank as i realized it wasn't there. Panic set in as i tried to recount my steps that morning. A part of me swore i tossed the carhartt in the pirogue so i knew it had to be on the path. Frantically searched for hours to no avail. you would think it would be on a snag and slightly floating on the water. The more i thought about it the more i questioned whether i had thrown it on the boat or left it on my bed cover.Earlier, as i paddled to my spot, i heard a truck with exhaust slow down , stop for a second around where my truck was ,then they smashed out like they were on a mission to get away and get away fast. Now I'm confused as to whether i had it or left it there! It had my keys in it , so i was stranded out there. Had to phone a friend and wait in the cold for five or six hours since we live around Baton Rouge. Got extremely sweaty trying to prod with a 15 foot stick with a horizontal nub at the end i cut off some mangrove, hoping i would feel it and be able to pull it up. I have been searching for 3 days and am at a serious loss. There was quite a bit of cash in there and some of those keys i can't replace again. I have 4 trailers with tongue locks and the typical keys like everyone else that i have lost before so they were the spares. Feel like such an idiot for not making new copies and bringing that much money with me, a damn fool for doing so!!!! Over thinking the whole bit now I've caused myself so much story confusion, replaying scenarios in my mind! Cant stop thinking that i may have left that jacket on my truck. It sucks that no matter how good you are to the world it doesn't repay the favor. Going back out tomorrow and bringing a diver buddy wednesday. Ashamed of myself and my actions! Wish it wouldn't have happened and i would have stayed in bed with the woman, like she wanted! Super bummed out!! I don't know about you guys but, if i caught a no good sob doing some shady stuff, they wont need the sheriff or Wardens, they'll need God himself!!!!!
Reply

225quackaddict
The concrete boat launch at the end of shell road. its down by Grand Bay, launches into the Atchafalaya River. The whole stab tires or shooting to scare someone isn't the solution in my book. All it will do is start a vicious cycle that is guaranteed to end badly. My new truck has a locking bed cover so that will solve the issue with gear in the bed. The grizzly is usually with me and i never leave my boat or pirogue unattended somewhere. It's pathetic we cannot trust in other people but, its the world we live in. Still love it out there and i will hunt it until the day i die!!
Reply