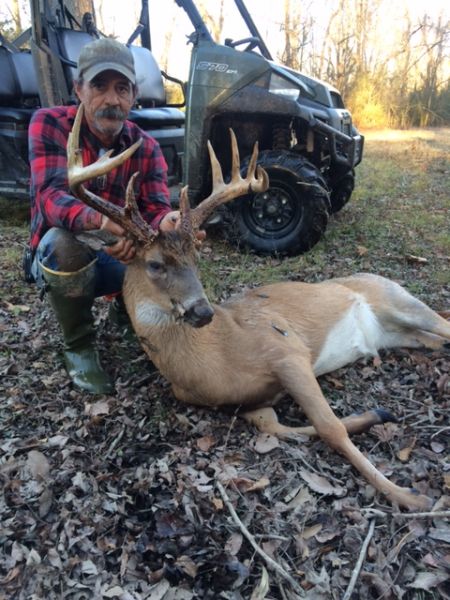 I know that this is a little late for a deer hunting report but due to work I haven’t had the time to do this but here goes. I am writing this report for my dad he's not very tech savvy, and I know that even though this was one of his proudest deer hunting moments ever he would never have done this even if he knew how to. My dad first called me back in November and told me that he had went out to check a stand and while walking through the woods jumped a couple deer up front and that one of the was a (MAN!) as he described. He borrowed a trail camera from a guy at work and set it up not far from where he had seen the deer that first time. The next week I get in from offshore and I had five voicemails from him so as you can guess he got a few pictures of the (MAN) which turned out to be a massive twelve point by him. The only drawback was he was passing every night but at nine thirty and again at three am, never from the same direction and never during daylight so it was hard to figure out where he was going are coming from to pattern. I was able to take the last week of rifle season off of work and headed to my parents to hunt the entire week, I had never seen the pictures because my dad only had a digital camera to look at them and only had a Flip Phone with NO camera..like I said not so tech savvy! But when I got to my parents I was able to look at them and blow the picture up and found that it was acutely a thirteen point. WE hunted hard the entire week and the MAN was nowhere to be found. I Left for home on Sunday the last day of rifle season at noon and my dad said that more that likely he was done for the season. It’s an hour and fifteen minutes from Rougon to Rayne before I got home my dad calls me freaking out saying he was watching the Man run a doe across the cane field about five hundred yards out. I convinced him to go buy a black powder license and he borrowed a gun from his co-worker. I had to go back offshore that week and two days before the end of primitive arms that Saturday afternoon I called my wife and she asked me if I had talked to dad and she said you might wana call him and call me back later. I called his cell busy, called the house busy, called my mom finally she answered and it sounded like she was in a bar with the amount of people in the back ground and said that everyone was there are had been calling asking about his deer I talked to my dad for a minute I could tell he was on cloud nine told him that I was so happy that all the work he put in that year payed off, he said he was on the way to the stand and a doe, eight point and the man ran across the pasture he got off the bike and started walking to where they went in the woods. When he saw the doe they was him and broke out back across the pasture to the woods he said I picked up held just off in front of him and when the smoke cleared he was laying in the middle of the pasture. I have seen my dad kill some very nice deer over the years and have always wanted to make one of these posts and just thought this would be a perfect way to start off. I hope yall enjoy reading my post I know I got a little long winded but I’m still excited about pop's deer it’s been over a month and he still talks about it every time I talk to him.
Reply

Great story and that is a great deer!! Where was this?? I hunt area 6 around Ramah and sounds like your deer are late rutters like ours!!
Reply

Tony Taylor, Louisiana Sportsman
Awesome story! U ought to bring the men to the Sportsman show this coming weekend in Gonzales. It will be officially scored, whoever brings the antlers gets in Free, and u get the chance to win a Yamaha a tv just for entering. Hop to see the man!
Reply